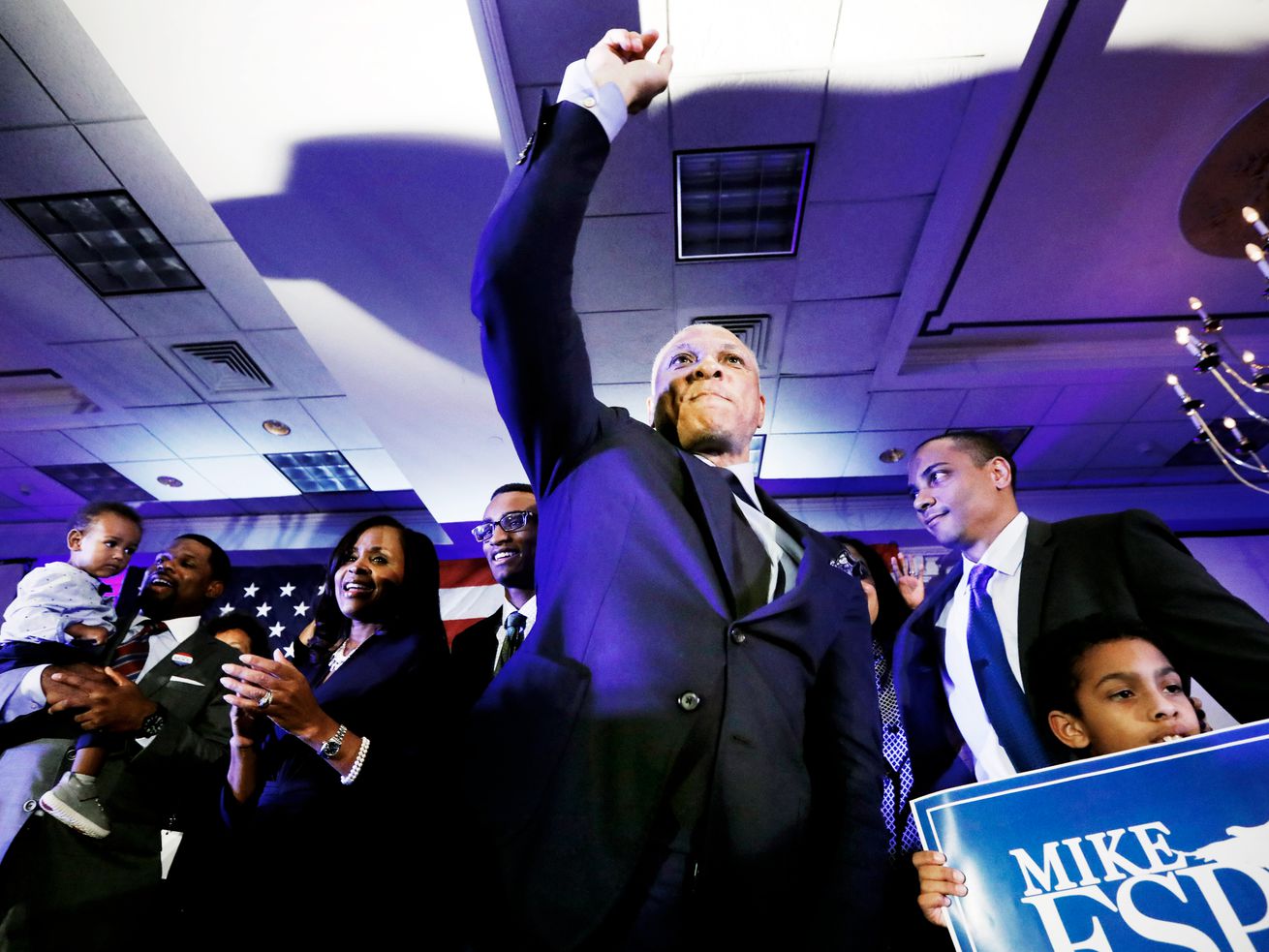 Mike Espy could become the first black senator from Mississippi since Reconstruction.

The midterm elections aren’t over. Next week, Mississippi freshman GOP Sen. Cindy Hyde-Smith and Democratic challenger Mike Espy will face off in the year’s final Senate election, a runoff that gives Democrats one last sliver of hope for a shocking 2018 upset.

The reason for even a little Democratic optimism is a brief glance to the east, where Sen. Doug Jones (D-AL) won a stunning special election victory a year ago. Strong Democratic turnout, particularly among black voters, and a flawed GOP opponent powered Jones to that unlikely win in Alabama. Espy, a black former Democratic Congress member and agriculture secretary under President Bill Clinton, could run the same playbook in Mississippi, where 35 percent of the potential electorate is African American.

“In a world in which you elected a Democrat in Alabama, it is easier to elect a Democrat in Mississippi,” said Stuart Stevens, Mitt Romney’s 2012 campaign manager who hails from the state and has run GOP campaigns there. “But Cindy Hyde-Smith isn’t Roy Moore.”

Hyde-Smith — elected to two terms as Mississippi agriculture commissioner before being appointed to replace long-time Sen. Thad Cochran last year — does not seem to have anything as obviously disqualifying in her past as Moore, the Republican who lost in Alabama after he faced multiple allegations of sexual misconduct involving minors.

But in the short sprint between the November 6 primary and the November 27 special election, Hyde-Smith has gotten herself into trouble with a series of statements that finally drew national attention to one of 2018’s undercovered races. First, she spoke approvingly (if figuratively) of public hangings in a state with an ugly history of lynchings. Then she seemed to endorse voter suppression (again, likely a poorly phrased “joke”) in the state that pioneered Jim Crow laws to disenfranchise black voters after Reconstruction.

Hyde-Smith is still the favorite. She has led every head-to-head poll, and election forecasters think the race leans toward Republicans. But in 2018’s final Senate drama, Democrats do have a chance to pull off the upset and shrink next year’s Republican majority.

How Democrats could pull off another Senate upset in the South

Hyde-Smith and Espy are vying to finish Cochran’s current term, which ends in 2020. They were the top two finishers on November 6 in Mississippi’s so-called “jungle primary”; Hyde-Smith got 42 percent, Espy earned 40 percent and Chris McDaniel, a former state legislator with white nationalist sympathies, received 17 percent.

The half-dozen operatives and observers I talked to all agreed on one thing: This will be largely a base versus base election. Espy needs to turn out a record number of black voters — along with the relatively small number of white Democrats — and win over enough independents to push him over the top.

“Espy has a chance,” Dallas Breen, executive director of the John C. Stennis Institute of Government at Mississippi State University, told me. “The message will be: ‘We need to do this. Now’s the chance.’”

The numbers are straightforward, according to the Democratic operatives I spoke with: Thirty-five percent of Mississippi’s population is black, and Democrats need them to make up at least that much of the electorate — preferably more, of course — to have a chance. Here, Alabama is the reason for hope. After dropping off in 2014 and 2016, black voters turned out in the highest numbers this decade to help push Doug Jones to victory. They were a slightly bigger share of the electorate than the broader population: 29 percent vs. 27 percent.

Then Espy must pick up a respectable (for Mississippi) number of white voters, somewhere north of 20 percent. In 2014, the last midterm election, white voters in the Deep South broke for the GOP 81 percent to 17 percent. It’s a heavy lift.

The targets for the Espy campaign are moderate and business-minded Republicans and independents who might be turned off by Hyde-Smith’s embrace of President Trump. Espy is a bit of a deficit hawk, for a Democrat, and says he probably would have voted for the GOP tax law.

On regulations, “I’m going to come down on the side of business,” he told the Clarion-Ledger this year.

Espy served in Congress from 1987 to 1993, before he left to become Clinton’s agriculture secretary, a stint that ended with Espy on trial for corruption, though he was acquitted on all charges. His latest ad, a closing argument of sorts, touts his bipartisan record, pointing out that the first bill he ever got passed through Congress was signed by Ronald Reagan.

“The first time Mississippi gave me a chance, I brought people together,” Espy says directly into the camera. “Today the crisis is the division in Washington, so I’m asking you to give me another chance.”

The Mississippi Senate race had mostly flown under the radar, even as election forecasters have classified it as competitive, until last week. Suddenly, it seemed like Cindy Hyde-Smith couldn’t stop putting her foot in her mouth.

“If he invited me to a public hanging, I’d be on the front row,” the senator said at one campaign stop in early November, in an attempt to return the praise of a local rancher who had spoken on her behalf.

“If he invited me to a public hanging, I’d be on the front row”- Sen. Cindy Hyde-Smith says in Tupelo, MS after Colin Hutchinson, cattle rancher, praises her.

Hyde-Smith is in a runoff on Nov 27th against Mike Espy. pic.twitter.com/0a9jOEjokr

The senator did not really apologize for the comment either, even as she strives to represent a state where 581 people were lynched from Reconstruction to the 1960s, the highest number in the country, according to the NAACP.

“I used an exaggerated expression of regard, and any attempt to turn this into a negative connotation is ridiculous,” Hyde-Smith said in a statement, as Vox’s Anna North reported.

Then within a few days, another video surfaced of Hyde-Smith saying this month that “maybe we want to make it just a little more difficult” for college students to vote. Mississippi was the first state to institute Jim Crow laws when it adopted a new state constitution in 1890, which authorized poll taxes and a literacy test.

Once again, Hyde-Smith’s campaign leaned on the explanation that the senator had been having a laugh, as Vox’s Emily Stewart reported.

“The senator absolutely is not a racist and does not support voter suppression,” a campaign spokesperson said.

Racially evocative language in a state with Mississippi’s history was bound to draw national attention, and it has. However, nobody I talked to in the state — Democrat, Republican, or unaffiliated — thought that Hyde-Smith’s comments would definitively sink her campaign.

They could help Espy in mobilizing voters and in fundraising, everybody agreed. But the senator’s comments probably won’t dictate the outcome on their own.

“I don’t see it as the opportunity to rest everything on these comments, ‘This is it. This is going to secure victory,’” Breen said in describing the Espy campaign’s response.

Instead, Espy honed in on Democrats’ No. 1 issue in the midterms — health care — and portrayed Hyde-Smith as a fierce partisan when Washington needs compromise.

Hyde-Smith has lent her opponent fodder for both attacks. She has voted with Trump 100 percent of the time, according to FiveThirtyEight’s tracker, and has said she strongly supports the president’s border wall, the Republican tax bill, the works. “I’m pretty firm, firm, firm on the wall,” the senator said. She is also an absolutist on gun rights and abortion, a major issue in a deeply religious state.

On health care, Espy has chastised Hyde-Smith for a vote taken earlier this fall, on a Democratic measure that would have reversed moves by the Trump administration that health policy experts say undermine preexisting conditions — and then again when Hyde-Smith told reporters that she’d never taken a vote to undercut protections for preexisting conditions. The Democrat-backed Senate Majority PAC has also gone on the air with an ad portraying Hyde-Smith as in the pocket of the insurance industry.

The white identity X-factor in the Mississippi Senate race, explained

If you just looked at the top of the November 6 results, you would see a close race: Hyde-Smith 42 percent, Mike Espy 40 percent. But the X-factor is the 17 percent of Mississippi voters who backed conservative Chris McDaniel, a former state lawmaker who very nearly toppled Cochran in a 2014 primary challenge and who has a long history of racially charged comments and associations with white supremacists.

McDaniel’s relatively meager showing was the end of a long fight between him and the Republican establishment in the state. He came within a percentage point of knocking off Cochran, a Mississippi politics legend, in 2014. But that left a bad taste in the mouths of many high-ranking Mississippi Republicans — including Gov. Phil Bryant, who more or less laughed off McDaniel’s pleas to be appointed Cochran’s replacement and went with Hyde-Smith instead.

For now, McDaniel’s political career is near an end. But his voters are important — the November 6 results show it. Whether or not they show up is the difference between a close race Espy could maybe win and a Hyde-Smith blowout.

“What if McDaniel voters don’t show up?” is how Breen described his biggest outstanding question for the runoff. “If they don’t show up, we almost had a 41-41 split between the two candidates.”

McDaniel attacked Hyde-Smith with all the usual establishment/RINO rhetoric, though he did urge his supporters to vote for her in the runoff when conceding the race. Whether they listen is the most important unknown of the race.

Republicans have attacked Espy over his corruption scandal. The state GOP released a video portraying the former agriculture secretary as “too corrupt for the Clintons” and “too liberal for Mississippi.” In brief, Espy was forced to resign over allegations that he received improper gifts, such as sports tickets and airfare, and was later indicted on 30 corruption counts. He was, however, ultimately found not guilty on all 30 counts after refusing to take a plea deal.

The Senate Leadership Fund, the leading GOP PAC for Senate races, is spending $1 million on its own radio and TV spots that link Espy to the Clinton scandals of yore.

Democrats believe the Hyde-Smith campaign is leaning hard into racial dog whistles and other unsavory attacks in the lead-up to the general election — and a quick scan through the Republican campaign’s Twitter feed explains why. One tweet described Barack Obama’s “radical, anti-American agenda”; others fearfully invoke George Soros and Cory Booker.

Did you know extremists like Cory Booker are campaigning for Mike Espy here in MS? Considering who’s lining up behind Espy—Clinton, Soros, Schumer, Pelosi, Warren, Feinstein, Harris—it’s not a surprise. With so much on the line, we cannot afford losing this seat to the DNC. pic.twitter.com/F5ZmmhIAWu

The most recent attack is over payments Espy reportedly received from the former head of state in the African nation of Côte d’Ivoir before he was arrested in 2011 on charges of rape and murder.

As the Jackson Clarion-Ledger reported, Espy did receive payments from the nation’s government while it was under Laurent Gbagbo’s leadership and, according to federal records accessed by Fox News, for a longer time than the Democratic candidate initially admitted.

“Secretary Espy worked on agricultural issues for international clients,” Danny Blanton, Espy’s campaign communications director, told Fox News. “Over the course of that work, he realized one of those clients didn’t pass the smell test, so he terminated the contract, and then reported what he knew to the US government.”

The midterms were already defined by a remarkable amount of racial fear-mongering by Trump and Republican candidates, as well as an unprecedented number of diverse Democratic candidates. Those conflicting forces will collide once again next week in the last major election of 2018.