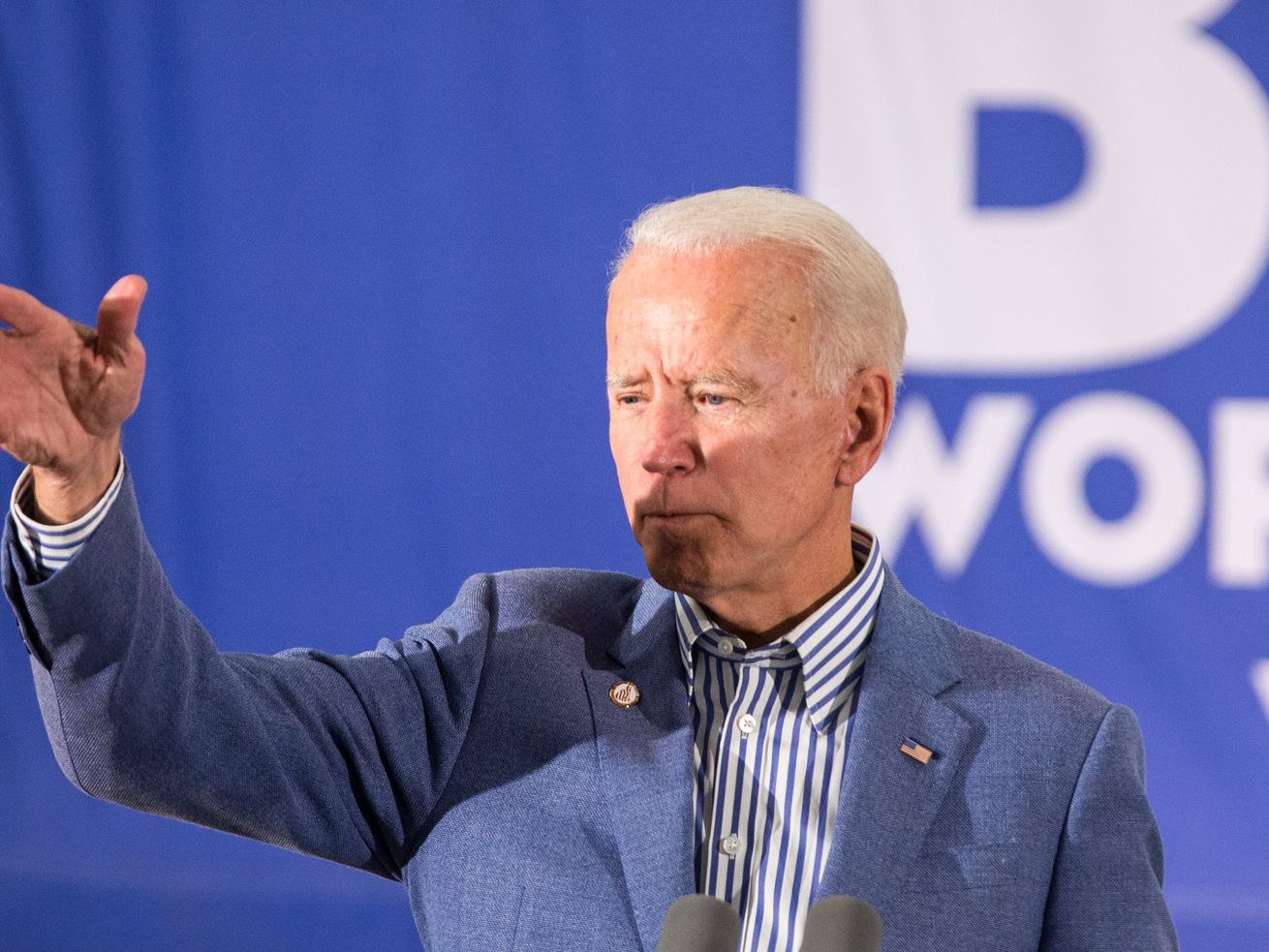 A reminder of some bad history, but far and away the least important part of his climate plan.

Joe Biden’s climate plan, released on the morning of June 4, contains a number of passages that seem to have been copied and pasted, at times with very superficial changes, from various advocacy organizations, policy shops, and in one instance a Vox article.

These plagiarism allegations were first flagged by Josh Nelson, the vice president of Credo Mobile and a veteran of several environmental organizations. He appears to believe that Biden’s ideas should be more progressive. Peter Hasson of the conservative Daily Caller added a few more examples to Nelson’s findings.

The paragraph in Joe Biden’s climate plan about carbon capture and sequestration includes language that is remarkably similar to items published previously by the Blue Green Alliance and the Carbon Capture Coalition.

The pincers movement illustrates some of the peril of positioning yourself as the moderate choice in a primary campaign against an incumbent president. Everything Biden does is bound to attract scrutiny from two rival ideological camps, leaving him fighting a two-front battle. In this case, there is also what unquestionably looks like sloppy staff work (the campaign has apologized for attribution errors).

On a more fundamental level, however, it’s not clear what the allegations really amount to. Journalists and artists are supposed to be original. Lifting the work of others is a form of theft. But borrowing ideas and policy concepts from specialists, advocates, and interest groups and then synthesizing them into politically workable packages is what presidential candidates are supposed to be doing.

Indeed, Nelson’s main point turns out to not be a plagiarism allegation at all, but rather the observation that “membership of the Carbon Capture Coalition … includes Shell, Peabody Energy, Arch Coal and Cloud Peak Energy.” The complaint, in other words, is just that Biden is potentially influenced by the wrong people.

Where exactly Biden got his phrasing from is possibly the least important question we can ask about his climate agenda. But plagiarism charges, even weak ones, can be a problem for him. They serve as a reminder of some more serious malfeasance that helped undo his 1988 presidential campaign.

What plagiarism is and why it matters

In school, plagiarism is a serious offense because it vitiates the purposes of the assignment in the first place. A teacher asks for an essay on Moby Dick not because she is personally in need of some Moby Dick takes, but because she’s setting you a task both to assess your abilities and to practice them. To cheat by copying someone else’s Moby Dick essay undermines the whole structure and requires serious punishment.

In journalism, plagiarism is also bad because you are essentially stealing. Journalists write articles in exchange for money. If you take someone else’s writing and reuse it as your own, you’re taking somebody else’s livelihood. The offense manifests itself most seriously and canonically when you lift whole sentences or paragraphs of somebody else’s work. But more broadly, if you borrow someone else’s ideas or reporting, you’re supposed to credit them. For example, the fact that the Biden allegations were first flagged by Josh Nelson of Credo Mobile and Peter Hasson of the Daily Caller may not be that interesting to you, the reader. But they are the ones who uncovered these facts, and as a journalist, I’m under an ethical obligation to give them due credit.

None of this seems to apply to policy development.

But neither Biden nor Glas is a journalist. And Glas probably doesn’t actually do all the writing of the letters that go out under her name any more than Biden is sitting alone at a desk writing climate plans. Most importantly, the BlueGreen Alliance is a political advocacy organization — a joint project of labor unions and environmental organizations whose entire purpose is to convince important politicians to copy their policy ideas. Indeed, it seems very plausible that the Biden campaign didn’t get this language from the 2017 letter at all, but rather that the BGA sent it to the campaign when the campaign was seeking input from relevant groups on what ideas they’d like to see in a climate platform.

Long story short, while any journalist would be mad about getting plagiarized by another journalist, policy shops and advocacy groups are happy to have their stuff copied by a leading presidential candidate. They would probably prefer to get some credit in a footnote, but it’s fundamentally not a big deal.

Biden’s problem, however, is that he does have some big-deal plagiarism in his past.

Biden’s political problem with plagiarism began more than 30 years ago, in 1987, when someone showed him a videotape of a campaign ad featuring Neal Kinnock — at the time the leader of the UK Labour Party — delivering an emotionally powerful speech about working-class origins, upward mobility, and the role of progressive social policy in making it all happen. Biden liked the speech and began to quote it on the stump, except at some point, it seems, he stopped quoting it and started just borrowing it.

As Maureen Dowd reported at the time, Biden during a debate at the Iowa State Fair essentially replicated Kinnock’s speech — transposing not just Kinnock’s ideas but facts about his life from Wales to Pennsylvania.

Biden: ‘’I started thinking as I was coming over here, why is it that Joe Biden is the first in his family ever to go to a university? Why is it that my wife who is sitting out there in the audience is the first in her family to ever go to college? Is it because our fathers and mothers were not bright? Is it because I’m the first Biden in a thousand generations to get a college and a graduate degree that I was smarter than the rest?’’

Biden: ’’Those same people who read poetry and wrote poetry and taught me how to sing verse? Is it because they didn’t work hard? My ancestors, who worked in the coal mines of Northeast Pennsylvania and would come up after 12 hours and play football for four hours?’’

Kinnock: “Does anybody really think that they didn’t get what we had because they didn’t have the talent or the strength or the endurance or the commitment? Of course not. It was because there was no platform upon which they could stand.”

A key thing about this is that Biden was copying not only Kinnock’s speech but his life story. Kinnock’s father was a Welsh coal miner. Biden’s family lived, broadly speaking, in Pennsylvania coal country, but none of his immediate ancestors were coal miners (his father sold cars). Kinnock was the first in his family to go to college. Biden, as he later admitted, had several college graduates on his mother’s side of the family, and one of his great-grandfathers was not just a college graduate but a state senator.

This became known as a plagiarism scandal, but obviously there would be a serious problem with making up biographical facts of your life — like when Donald Trump pretends to be a self-made man rather than a rich kid who inherited tons of money from his dad — whether or not Kinnock had ever uttered these particular phrases.

The inquiry into the Kinnock matter ultimately revealed an additional plagiarism scandal back when Biden was in law school that got him disciplined in the late 1960s. This is all old news these days. Twenty years after the ill-fated 1988 campaign, Biden ran for president again and did very poorly. Then he became vice president for eight years, and in a practical sense, his public image is shaped much more heavily by those years than by decades-old plagiarism allegations.

Politically, the main question this raises is whether it’s true that a person with almost 50 years in national politics is really a strong electability choice — nobody sticks around that long without making some mistakes. Alternatively, Democrats may take the view that in the Trump era, the traditional concept of the “scandal” or “gaffe” is completely obsolete.

Nelson’s original tweets, however, actually raise a much more important point about Biden’s climate plan than anything related to plagiarism.

The Biden climate framework is clearly influenced, in both its substance and its framing, by the activist push for a Green New Deal. But it also attempts to keep labor behind him.

The Green New Deal push has broadly influenced the thinking of basically every Democrat who has released a climate change plan, and several of the candidates running for office are sitting US senators who have officially endorsed the canonical Green New Deal resolution in Congress. But while the Green New Deal framing is explicitly designed to pair environmental concerns with economic justice concerns, it’s notable that America’s labor unions have given the concept a chilly reception.

Tensions between labor groups and environmental groups are nothing new, but part of the process of responding to growing partisan polarization has been an increasing sense in both camps that coalition politics is a must. And from 30,000 feet up, the Green New Deal very much looks like an effort at that kind of coalition politics — which is why it’s notable that it hasn’t really worked on a labor union level.

Biden’s plan, while similar in a broad thematic sense to other variants of Green New Deal, differs in at least three subtle but noteworthy ways:

To his many critics on the activist left, all this is further proof that Biden is a corporate shill in progressive clothing, unwilling to make the kind of radical break with incumbent industry players that they believe the planet needs. To supporters, the fact that Biden is paying attention to what actual blue-collar unions are saying they need to make a low-carbon transition viable rather than bolting left-wing wish lists from disparate policy areas together reinforces his claims to be the electable choice who’s ready to win back the Midwest for Democrats.

Either way, it’s never a scandal to find out that a presidential candidate gets policy input from outside groups.