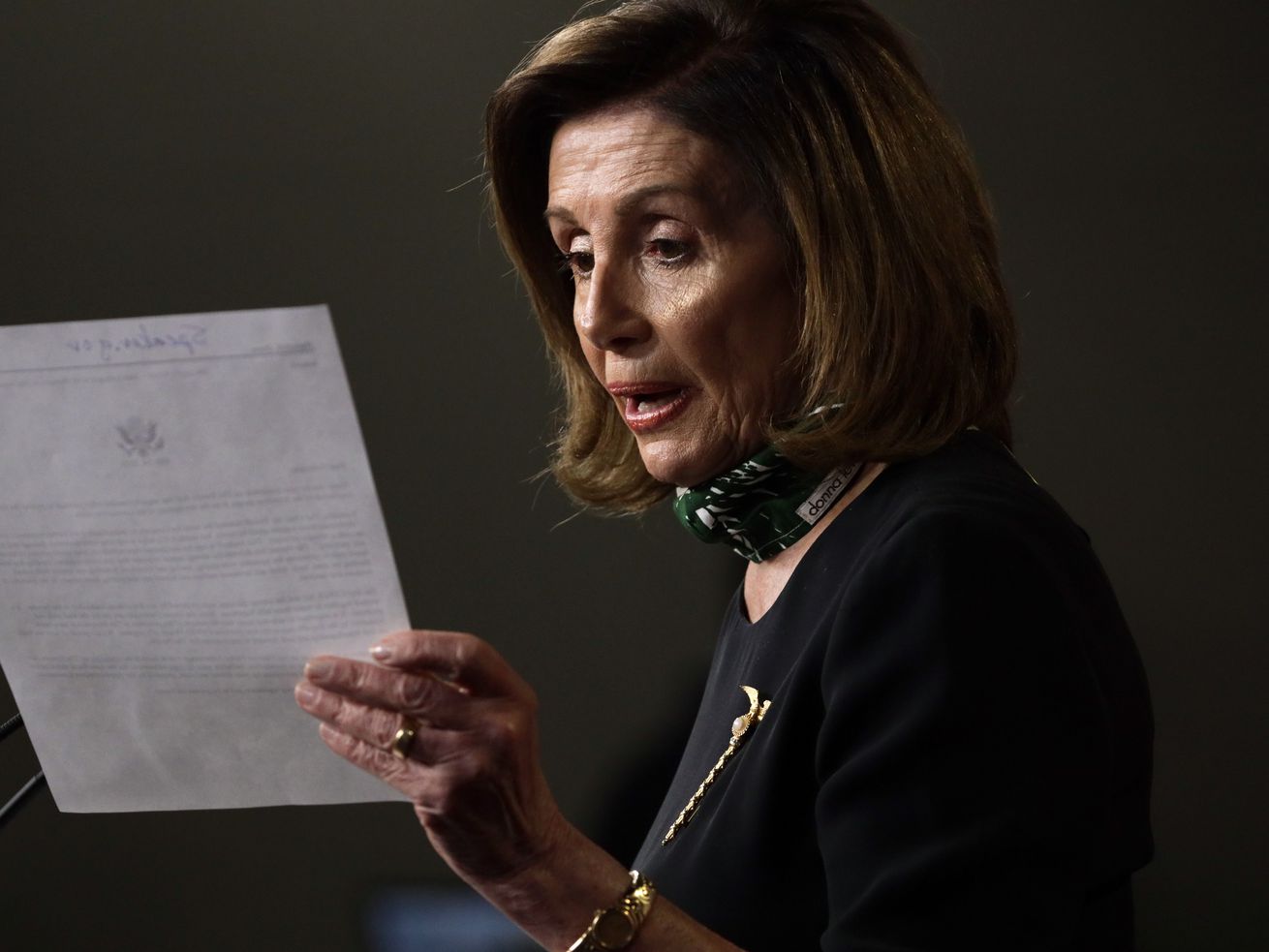 Speaker of the House Nancy Pelosi reads from a note during a weekly news conference on May 14, 2020 in Washington, DC. | Alex Wong/Getty Images

House Republicans tried and failed to strike a provision that would give stimulus payments to immigrants.

The HEROES Act, which passed the House on Friday, would make taxpaying immigrants and their families eligible for federal stimulus funds regardless of their legal status. Under the $2.2 trillion CARES Act signed in late March, only immigrants with Social Security Numbers — and who fulfilled certain residency requirements — were able to receive the payments, meaning unauthorized immigrants and many temporary visa holders were excluded.

Republicans are not convinced that another aid package is warranted after the CARES Act, with Senate Majority Leader Mitch McConnell saying he hasn’t “yet felt the urgency of acting immediately” on further legislation.

And Republicans in the House argued emphatically against the HEROES Act’s provision offering immigrants stimulus payments, with Rep. Denver Riggleman of Virginia calling it a “poison pill.” The Republican position was that relief funds should be dedicated to US citizens only. Despite being joined in their opposition by 13 Democrats, however, Republicans failed to block the provision in a 198-209 vote. But it isn’t likely to survive the Republican-led Senate, where McConnell has been explicit in his objection to the plan.

“Another round of checks for illegal immigrants. Can you believe it?” McConnell said in a floor speech May 14. “We forgot to have the Treasury Department send money to people here illegally. My goodness, what an oversight. Thank goodness Democrats are on the case.”

Democrats, on the other hand, have asserted that failing to offer financial aid to many immigrant families is an injustice that must be rectified, especially as the public has come to rely on immigrants to provide essential services during the current crisis. For instance, unauthorized immigrants make up about a quarter of farmworkers and 8 percent of the service sector and production workers.

“They pay taxes, contribute to our economy, and in many cases are fighting on the front lines of the coronavirus crisis,” Speaker of the House Nancy Pelosi said in a call with reporters May 1.

Why certain immigrants have been barred from stimulus relief

The new bill would retroactively make unauthorized immigrants and their families eligible for the first round of stimulus checks, which the government started sending out in April, as well as a proposed second round of checks, which would amount to up to $1,200 for each tax filer and each of their dependents, depending on household income. These provisions are meant to correct for language in the CARES Act that left millions of people — some of them US citizens — without access to stimulus funds.

The CARES Act gave most taxpayers up to $1,200 — along with $500 for each of their children under the age of 17. But immigrants without Social Security numbers, and who have not lived in the US long enough (usually five years) to file taxes as residents, weren’t eligible for the CARES Act’s stimulus checks.

The CARES Act also excludes those in households with people of mixed-immigration status, where some tax filers or their children may use what’s called an Individual Taxpayer Identification Number (ITIN). The IRS issues ITINs to unauthorized immigrants, as well as certain legal immigrants so they can pay taxes, even though they don’t have Social Security numbers. If anyone in the household uses an ITIN — either a spouse or a dependent child — no one in the household qualifies for the stimulus checks unless one spouse served in the military in 2019.

This provision has led immigrant advocacy groups to challenge the CARES Act on the basis that it unlawfully discriminates against US citizens who have unauthorized immigrant family members.

“The refusal to distribute this benefit to US citizen children undermines the CARES Act’s goals of providing assistance to Americans in need, frustrates the Act’s efforts to jumpstart the economy, and punishes citizen children for their parents’ status — punishment that is particularly nonsensical given that undocumented immigrants, collectively, pay billions of dollars each year in taxes,” Mary McCord, legal director of Georgetown Law’s Institute for Constitutional Advocacy and Protection, said in a statement.

This number also includes those with deportation protections under the Obama-era DACA program, children and young adults whose parents often don’t have legal status. They’re left wondering how they can help support their families so that their parents don’t have to go to work, where they risk getting sick, and how they can help cover the costs of their parents’ medical care should they need it, Sanaa Abrar, advocacy director at the immigrant advocacy group United We Dream, told Vox.