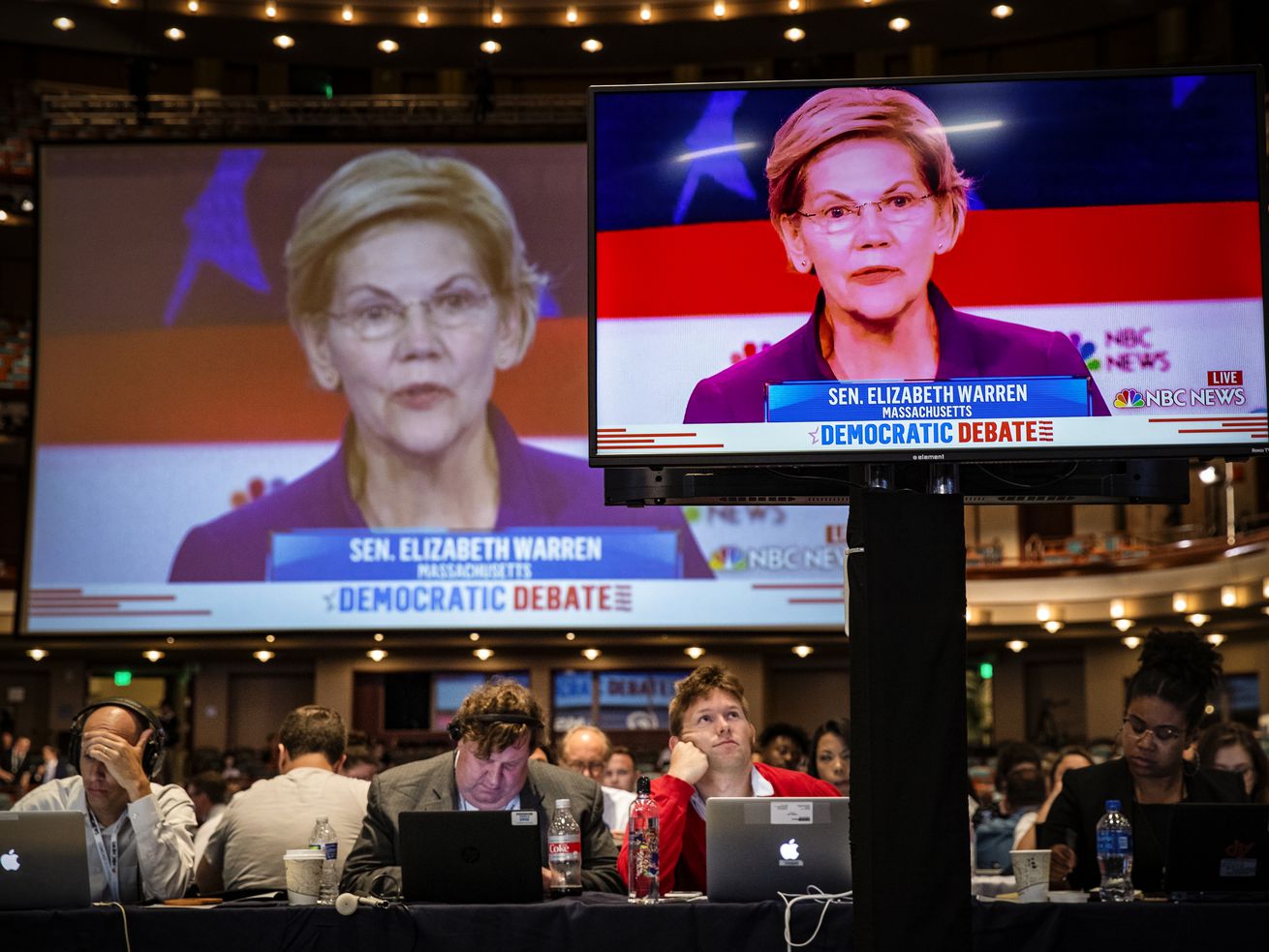 But the second could show how it might swing back.

The first Democratic primary debate on Wednesday was pretty clearly Sen. Elizabeth Warren’s night. She was the only candidate onstage in the top tier of polling, and nothing that happened during the two hours was likely to take her off that perch.

But it was also Warren’s night in another sense: The ideas of her wing of the party — and in some cases, her own plans — dominated the conversation and showed how far the center of gravity has shifted in recent years.

The debate over health care wasn’t over whether the federal government should provide insurance. It was over whether it should directly control the entire insurance market or merely a large chunk of it.

The conversation on immigration didn’t include any sops to centrist anxiety about “border control.” Instead, it centered on decriminalizing undocumented entry into the United States, a proposal that would have seemed outlandish in the Obama years when deportations were reaching what were at the time record highs.

Thursday’s debate may well highlight the party’s ideological evolution and tensions, when the race’s frontrunner — former Vice President Joe Biden — takes the stage against Bernie Sanders, the two embodiments of the party’s establishment and left wings. And if Biden prevails in the primary, he could end up reversing the trends so starkly on display on Wednesday.

Wednesday showed one possible Democratic future — and Thursday might reveal another

The progressive shift in the Democratic voting base in the past 20 years is clear and profound. The Atlantic’s David Graham laid out some of the most striking data in a November summary:

On economics, three-quarters of Democrats say that the government doesn’t do enough to help poor people, up from half in 1994. Two-thirds say that government should regulate business more, again up from half in 1994. Conversely, in 1994, two-thirds of Democrats believed that people could get ahead if they were willing to work hard. Now only half do. The percentage of Democrats who believe that corporations make too much money is up 12 points. But the movement is not uniform. While the portion of Democrats who say that the government should do more to help the poor, even if it requires taking on debt, rose from 58 percent in 1994 to 71 percent in 2017, it is still below the peak of 77 percent, in 2007.

There’s also dramatic movement on race, which may more than anything reflect the exodus of conservative whites as the Democratic Party becomes more minority-heavy. The percentage of Democrats who say that the government needs to do more to fight racism has risen from 57 to 81 since 2009. In 1994, four in 10 Democrats said that racial discrimination was the main reason black people couldn’t get ahead; in 2017, more than six in 10 did. White voters have moved especially dramatically, as Thomas Edsall notes: On both of these indicators, white Democrats are actually further left than black ones.

The party’s elected officials, though, haven’t wholly reflected that shift. The following chart, from VoteView, charts the two parties’ DW-NOMINATE scores (a political science metric of officials’ ideology based on voting record) in the House from the 19th century to 2015. The Democratic Party’s average, in dark red, shows relatively limited movement between the mid-’90s and mid-2010s.

In the past few years, though, Democrats have moved to close this gap between the base and elected officials. Sanders’s 2016 presidential run appears to have played a major galvanizing role here, opening up space for a genuinely left-wing shift among Democratic leaders that produced a crop of progressive 2018 stars like Rep. Alexandria Ocasio-Cortez.

In July 2018, YouGov asked self-identified Democrats whether they wanted candidates for the midterm elections to be “more or less like Bernie Sanders.” Fifty-seven percent said they wanted more Sanders-esque candidates; a scant 16 percent said less.

The makeup of party primaries is starting to reflect the base’s interest in more aggressive candidates. An October Brookings report sorted the Democratic primary field into three categories: Moderate, Establishment, and Progressive. It found that the percentage of “Moderate” candidates fell by half between 2014 and 2018, while the percentage of “Progressives” went up by around 60 percent.

Wednesday’s debate shows the response to this shift. None of the Democrats onstage really attempted to claim the mantle of centrist for themselves or to differentiate themselves by bashing the party’s drift toward “identity politics” or “socialism.” Sen. Amy Klobuchar, one of the more centrist Democrats onstage by record, was frequently given an opportunity to make enemies to her left — and pointedly chose not to.

But while the race to the left on policy is a response to genuine ideological demand from the party’s voters, it’s not clear that it will survive the primary season. That’s largely due to Biden, who is leading the poll averages by double digits.

Biden is and remains a deeply committed centrist on big questions surrounding policy and American institutions. Perhaps due to his name recognition and association with the still-popular Obama administration, he is still the frontrunner despite being out of touch with where the party’s policy center of gravity has moved.

And if he wins the nomination, the pressure for the party’s representatives to align themselves with his views will be immense. Ditto voters — there’s a hefty amount of political science research showing that voters frequently adjust their policy views to match those of the elites in the parties they support.

So while Wednesday’s debate may have seemed like a victory lap for the Democratic left, they can’t rest easy. What seemed tonight like the party of Warren could still well end up being the party of Biden.