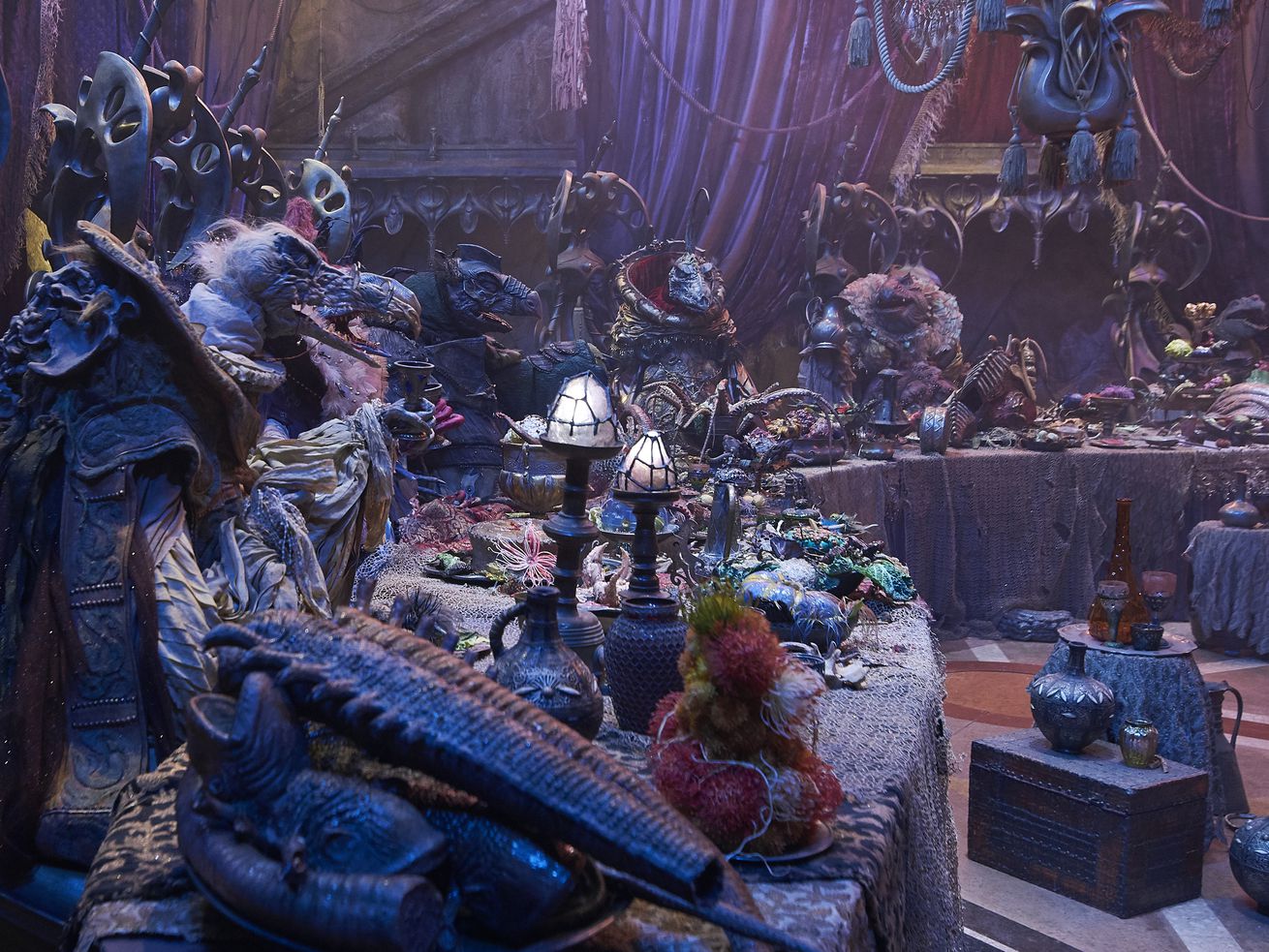 The Skeksis are Dark Crystal: Age of Resistance’s most fascinating element.

One of the best and most terrifying things about the Skeksis, the giant vulture-like creatures who rule, and ruin, the world of Jim Henson’s The Dark Crystal, is how pedestrian they are. The Skeksis take over and form a monstrous regime, even though there are just, like, 18 of them. And they do so mainly through a combination of political in-fighting, gluttony, and wanton disregard for anyone else.

In other words, they’re pretty much just normal politicians.

They’re simultaneously hilarious and chilling, and it’s easy to see why Netflix was able to assemble an all-star cast to play this cadre of gleefully evil villains in its new Dark Crystal series, Dark Crystal: Age of Resistance. For one thing, The Dark Crystal is a legacy project that lots of people apparently wanted to be involved with. But the Skeksis in particular still loom large in our imaginations, perhaps more than any other characters from Henson’s cult 1982 film.

The Skeksis are meant to represent an allegorical form of pure selfishness. But their traits — their love of food, fashion, and manipulation, for example — are distinctly earthly. They’re as ridiculously easy to love as they are to hate, which may be why they garner so much power. The Skeksis are, at core, supremacists, but their particular brand of supremacy isn’t based on ideology, not really. They just want everything for themselves. And that makes them surprisingly difficult to thwart.

The Skeksis’ gleeful evil is one of the best, and scariest, things about The Dark Crystal, but while the movie presents them as a complex group of villains, it doesn’t do much to explain how or why they became that. At the time The Dark Crystal film takes place, the Skeksis have used up all the natural resources of the planet of Thra, represented by the once-healing giant crystal at its center. Corrupt and unstoppable, the Skeksis have tainted the crystal and carried out a genocidal reign that’s rendered most of the planet’s other species either extinct or deep in hiding.

The fact that they’ve wasted the planet and are exhausting their own sustainability as a result doesn’t bother the Skeksis; they spend all their time hanging out in their throne room partying and feasting, while the world falls further into ruin and their numbers, which were tiny to begin with — seriously, there are only 18 of these guys! — dwindle even more.

The new Netflix series is a prequel, taking place about a century earlier. The series starts as the Skeksis are discovering how to corrupt the crystal, using it to concoct a horrifying plan to kill all of the Gelfling, the peaceful elf-like creatures who populate Thra, in order to prolong their own lives. Age of Resistance offers a faithful take on the Skeksis, but they’ve also been deepened over time, and their individual quirks have become full-fledged character traits. The series also gives us far more insight into the fascinating, chilling logic the Skeksis use to justify their supremacy.

The Skeksis are brought to life by a host of well-known talents, each of whom wonderfully animate this crowd, and the standout of them all is Simon Pegg as the Skeksis Chamberlain. As Dark Crystal fans know well, the Chamberlain often plays the fool to get what he wants, until he reveals his truest nature: crafty, ruthless, and manipulative. Here, Pegg and puppeteer Warrick Brownlow-Pike unite for a performance so committed and perfect that I came away feeling as though this, surely, was the role of Pegg’s dreams. He nails the Chamberlain’s well-known vocal mannerisms and plays every scene with a mix of cackling glee and clear-sighted shrewdness.

The Chamberlain serves as a mouthpiece for several of the series’ biggest ideas, like the creatures’ tendency to debase each other when their own status is threatened. In one key scene, the Chamberlain captures Rian, one of our heroes, and holds him for a chat. Rian is a Gelfling, so you might expect the Chamberlain to be ruthless to him. But the Chamberlain intriguingly treats Rian both as an equal, a fellow persuasive strategist, and as a pawn, a mere resource who could be turned into compost for Skeksis at any moment.

The Chamberlain reconciles this contradiction as a natural, primitive survival instinct, but he’s also open about manipulating the other Skeksis’ primitive greed to get what he wants most: more power. He’s also blunt about viewing Gelfling as inferior: “Gelfing want to be ruled,” he tells Rian matter-of-factly, so why shouldn’t the Skeksis rule them? The Chamberlain’s logic isn’t just that the Skeksis are entitled to whatever they want; it’s that the Gelflings are somehow inherently subservient to them. It’s a chilling, straightforward supremacy, made all the more scary because it’s accompanied by the Chamberlain’s sophisticated politics. He’s completely capable of treating Rian as an equal, and acting as if all the normal societal conventions are in play, until it’s no longer expedient to mask his true, murderous intent.

Age of Resistance’s chief narrative is one of complicity, complacency, and the mix of trust and lies that fuel both.

The other thing the Chamberlain manipulates, with terrifying finesse, is the truth. He clearly sees reality as malleable depending on what narrative best suits his purpose; and he’s frequently proven correct. For instance, when the Chamberlain bluntly tells him he needs Rian to “lie about Skeksis” to the other Gelfling, Rian is tempted; the Chamberlain spins him a narrative in which he spins a narrative of his own in order to save lives — and it almost works. At several other moments, the Skeksis allow the Gelflings, who still consider them to be just, wise, and gracious stewards, to spread Skeksis-friendly narratives on their behalf, while demonizing anyone who speaks against them.

This social conditioning is one of Age of Resistance’s most searing themes. Characters frequently refuse to accept or even hear facts that challenge the dominant view that things are fine and the Skeksis are benevolent rulers who know what’s best for society. They dismiss, ignore, or become outraged by reports that contradict this worldview, sometimes from fear, sometimes from malice, and sometimes over personal reasons. Again and again, the Gelfling, despite all their education, cultivation, and sophistication, are shown as completely unwilling to hear truths that threaten to throw their comfortable existence into upheaval. They’re frequently depicted as being reverently loyal to the Skeksis, and those among them who view the Skeksis clearly are often dismissed and branded as troublemakers. In this respect, the Chamberlain is right: the Gelfling do want to be ruled — at least, they want to be able to trust and put their faith in the leaders of the land. Who doesn’t?

None of this would work if the Skeksis weren’t, on some level, engaging and appealing. They’re often sophisticated and welcoming, masking their ruthlessness beneath grand shows of generosity. Indeed, what’s often terrific about these characters is the ease with which the banal and the horrifying resides within them. These are creatures who preen over the latest fashion, worry about their looks, and laugh endlessly at their own hilarity. They’re endlessly ravenous, but rather than openly consuming everything in sight, they manipulate Thra’s customs and social norms to remain in their subjects’ good graces until their true evil can no longer be denied.

And this is usually funny and whimsical until it isn’t. In one scene, a pair of Skeksis horrify a Gelfling queen by eating a portion of her clan’s sacred ritual bulbs, but rather than complain she remains civil; shortly afterwards, they drop all pretense and seize her power, in the same room where the ritual bulbs dangle overhead. The Skeksis know that civility is always a veneer that can fall away the moment status and survival are threatened. And their willingness to consciously use that veneer to mask their depravity make them scarier, and more fascinating, than ever.