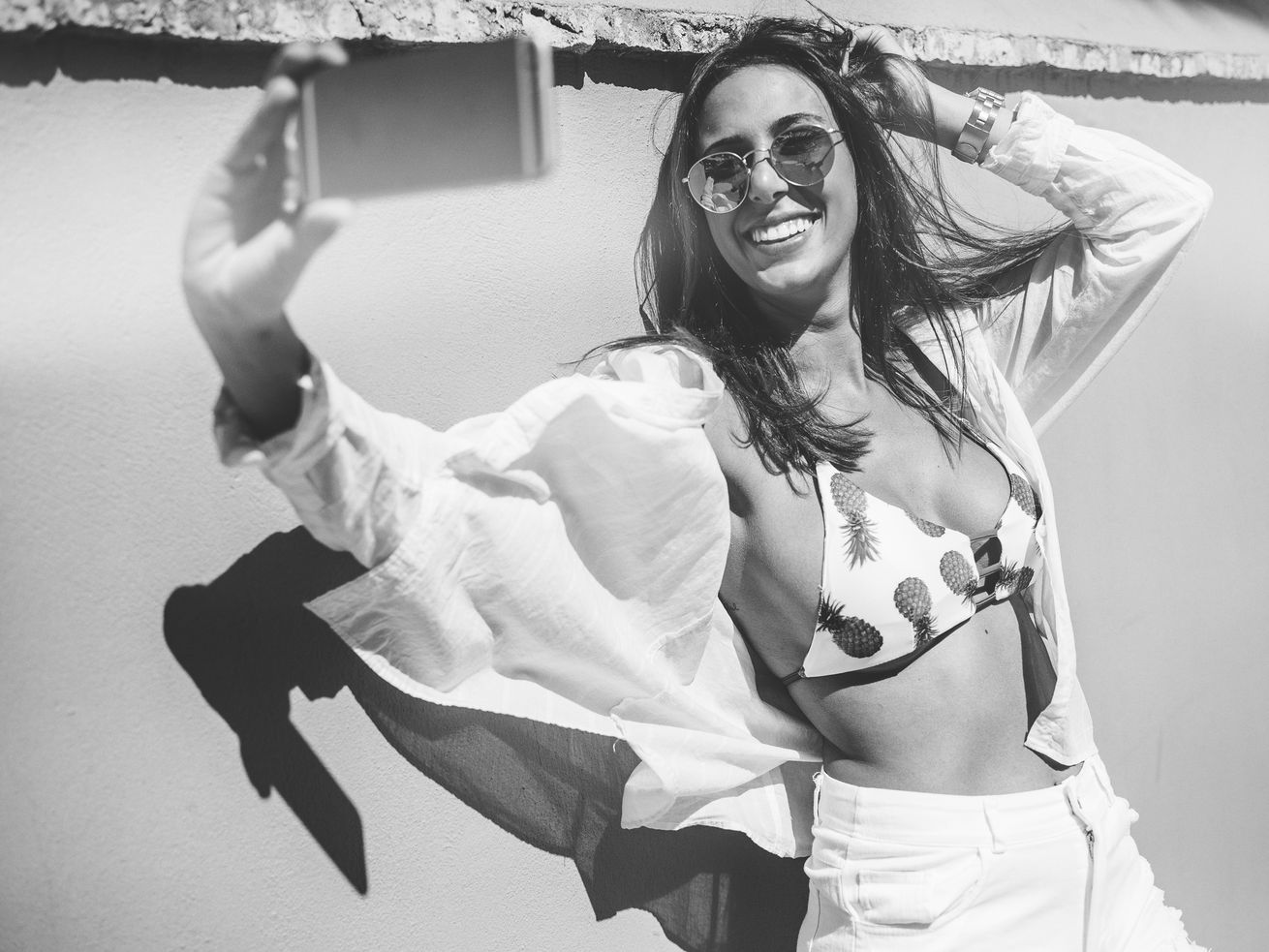 Millions of photos have flooded the #ChallengeAccepted hashtag on Instagram as women posted captions in support of female empowerment and tagged their friends. | Getty Images

The global hashtag is now being used to bring attention to a women’s rights campaign in Turkey.

Over the weekend, the #ChallengeAccepted hashtag on Instagram was flooded with millions of black-and-white photos — flattering candids, selfies, and posed shots — posted by women from across the globe. These images were usually accompanied by captions or hashtags that broadly expressed support for “female empowerment” or “women supporting women,” with users tagging their friends in a chainmail-like style.

Celebrity participants like Natalie Portman, Kristen Bell, Ivanka Trump, and Khloe Kardashian brought mainstream attention to the trend in the US, which helped ignite criticism over the tag’s performative nature. Who are these black-and-white photos for, and how exactly does this further the cause of feminism? Social media users pointed out how these posts aren’t advocating for any specific feminist acts; rather, they appear to be another manifestation of digital bandwagoning for influencers and celebrities to partake in.

As the #ChallengeAccepted trend proliferated, however, overlapping narratives about its origin and intent began to emerge. The original challenge in 2016, which also featured an influx of black-and-white selfies, was intended to raise awareness for cancer, although critics of the cause (notably cancer survivors) found it to be infantilizing and silly. According to the New York Times, the latest iteration of the 2020 challenge stemmed from a post made by a Brazilian journalist on July 17.

In recent days, Turkish feminists and activists have claimed that the influx of black-and-white photos was intended to highlight Turkey’s concerning femicide rate and the violence Turkish women face in their daily lives; the decolorized filter is a reference to how the media features black-and-white photos of women who have been found dead. In 2019, 474 women were murdered in Turkey by men, according to the women’s rights group We Will End Femicide, and femicides have steadily increased in the past decade.

The death of 27-year-old Pınar Gültekin, a student who was murdered by her ex-boyfriend, triggered a fresh surge of activism in the country as women rallied for greater governmental protections and enforcement of the Istanbul Convention. The convention, which was ratified by Turkish officials in 2012, established a legal framework for European countries to prevent gender-based violence, protect victims, and prosecute perpetrators.

On Instagram, @beelzeboobz, a user based in Istanbul, Turkey, posted an explanation of the challenge to their non-Turkish friends, urging them to share the information so the “message does not get lost in translation” or lose its meaning.

Online, other Turkish advocates have chimed in, stating that key Turkish hashtags like #istanbulsözleşmesiyaşatır and #kadınaşiddetehayır (which translate respectively to “Istanbul Convention saves lives” and “No to violence against women”) were left out as the challenge gained global attention.

“Social media, especially Twitter, has served as a great platform to talk back to the authorities who have tried to cover up the mysterious deaths of women,” Sevgi, a Los Angeles-based Turkish writer, wrote to me on Twitter. Sevgi, or @neosevgism, posted a thread on July 28 explaining the violence that Turkish women face and the need to enforce the Istanbul Convention. “I wanted to raise awareness to how Western countries do not care about Eastern women’s issues,” she told me, noting how women from Muslim or Asian countries tend to be exoticized or ignored by Western society.

WHAT IS THIS CHALLENGE AND WHY ARE WE DOING THIS

Due to the decentralized nature of most social media platforms, it’s tricky to specifically track how certain trends and challenges originated — not to mention what exactly led them to achieve virality. While Times reporter Taylor Lorenz has argued that the #ChallengeAccepted trend did not emerge in Turkey, it appears that Turkish advocates have successfully drawn attention to their movement by way of this popular hashtag, using it to amplify their humanitarian cause to a global audience.

Lorenz covered the challenge on July 27, days before most American audiences became aware of how the black-and-white photo trend coincided with social media activism highlighting femicide rates in Turkey. She received pushback from US participants, some of whom felt that an Instagram post or selfie shouldn’t necessarily dilute their devotion to feminist causes. Many participated because they were tagged by mentors, family members, or fellow business partners, and wrote glowing comments about the need for a strong support system to pursue their goals in life.

“I am all about a challenge where we can encourage one another in this life,” reads a post from a lifestyle coach and trainer. “For as long as I can remember, I have felt deeply passionate to encourage and lift up women.” Another female entrepreneur expressed how proud she was to be part of three women-owned companies, writing, “To see all these wonderful ladies in this world doing so many amazing things each day inspire me to be better and live authentically.”

Regardless of who reignited the #ChallengeAccepted hashtag, the trend surfaced during a time when posting on social media is an especially fraught act. Currently, there are “conflicting directives on how to be a good ally,” as Rebecca Jennings previously wrote for The Goods on #BlackoutTuesday. People are unsure about what’s appropriate to post, but they also want to feel like they’re contributing rather than doing nothing at all. Then, there are the heightened levels of tone policing within these online spaces to consider. No one wants to be publicly shamed for what they post, which has led many to feel like they should seek permission or acknowledgment before speaking on a certain matter.

While the Western iteration of the trend, populated by celebrities and influencers, could be an empty gesture, the vast range of responses toward someone who decides to engage in it — from belittling their intentions to applauding them — is a fascinating circular argument. Why should a black-and-white selfie be condemned simply because a person felt like posting it on their personal page? Sure, it might be a silly or hollow signal, but the internet is inundated daily with images and poor Twitter takes that are arguably more damaging than a harmless, self-indulgent selfie.

A number of Instagram users have recently started commenting on photos under the #ChallengeAccepted tag, encouraging posters to understand the Turkish context of a black-and-white photo and the cause behind it. Turkish activists, too, have been heavily active on social media since the disturbing disappearance of Gültekin, but the language barrier has largely been an obstacle to the dissemination of information. In the past few days, though, I’ve seen a surprising number of Instagram posts and Stories with the #ChallengeAccepted tag that seek to direct attention toward the Turkish femicide rates.

Linda Guo, a 20-year-old violinist, recently posted a black-and-white photo because she was nominated by two close friends but sought to include tags about the Istanbul Convention and the Turkish femicide. “I want to commemorate the victims of femicide and any other crimes against women, to fight against the Istanbul Convention withdrawal and show that I’m proud to be a woman,” she said via Instagram messages.

Social media trends in the United States — especially when they’ve been co-opted by public figures — tend to be dismissed as performative or futile to political causes. However, in countries like Turkey, Chile, or Hong Kong — where channels for free speech are more limited than in the US — hashtags and challenges can be an avenue for digital mobilization and global awareness.

“I don’t care about owning the picture challenge,” Sevgi added. More importantly, it’s “about the Turkish women who are posting about it” and the human rights violations that occur daily.