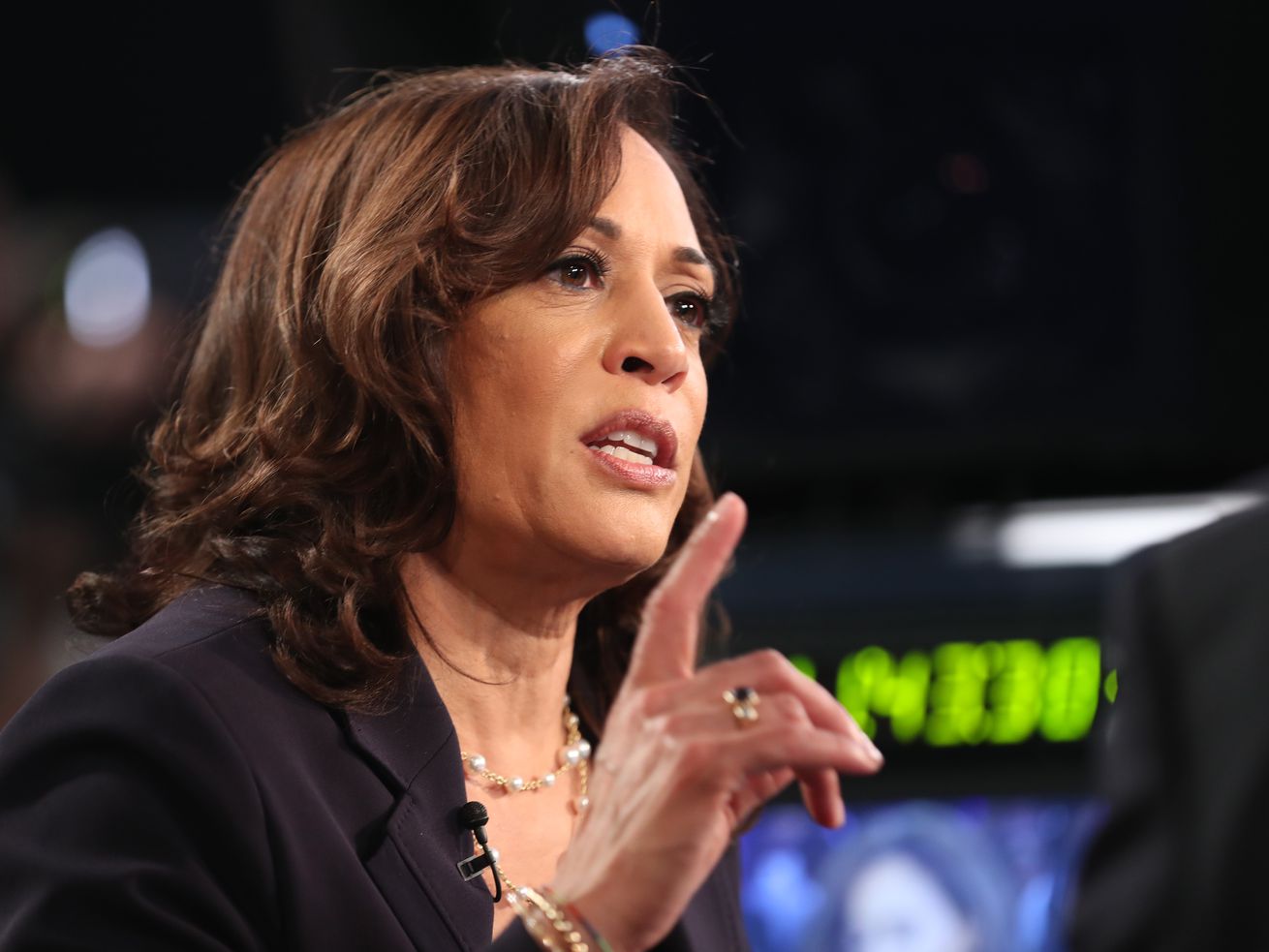 When it comes to debating Trump, women have an advantage.

A lot of Democrats are worried that a woman can’t beat President Trump.

In a recent poll, just 33 percent of voters thought their neighbors would be comfortable with a female president. And as Vox’s Li Zhou has written, “electability” for a lot of Americans seems to mean being white and male.

So for some people, this week’s first Democratic presidential debates, with multiple women onstage for the first time ever, became a referendum on whether a woman would have what it takes to debate Trump. Washington Post political correspondent Dave Weigel summed up the attitude, arguing that Sen. Kamala Harris’s performance would show voters a woman could really win:

One reason that Kamala exchange with Biden matters: Dem voters need to be convinced that a woman can face Trump onstage and take him apart. That moment got her a long way.

Harris’s exchange with Biden on his history with busing — “Do you agree today that you were wrong to oppose busing in America then?” she pressed Biden, putting him on defense — was one of many strong moments for her in the debate, and suggested she could handle Trump ably. But when it comes to debating our current president, her gender isn’t an obstacle she’d need to overcome. It’s an advantage.

Trump has spent his life trying to be the alpha male, perhaps stretching all the way back to his time in military school. His tactics are often based on challenging his opponents’ masculinity. Think of the 2016 Republican primary debates, when he called Marco Rubio “Little Marco” and boasted about the size of his penis. That tactic simply doesn’t work on women. His approach with Hillary Clinton and other female opponents and critics has generally been to belittle their looks — hurtful and offensive, to be sure, but something most high-profile women have a lot of practice handling.

Though Clinton lost the 2016 election, many felt she won the debates (and, of course, she won the national popular vote). And this week’s debates were another reminder that not only can a woman hold her own in a debate against Trump, a woman might actually be uniquely suited to beating him.

Worry about a woman losing to Trump in 2020 runs deep. In a June Daily Beast/Ipsos poll, 74 percent of voters said they would be comfortable with a female president, but just a third said their neighbors would. Meanwhile, as Vox’s Tara Golshan wrote earlier this month, former Vice President Joe Biden and Sen. Bernie Sanders, two white men in their 70s, were leading in polls going into the debates, even though polls suggest that, given a choice, Democrats might prefer a candidate who isn’t an older white man.

So for some Americans, the debates this week weren’t just a test of who was the best candidate. They were also a test of whether a woman could really win.

By any measure, Harris and other female candidates passed. As Vox’s Ezra Klein wrote, Harris “tore into Biden’s comments about segregationists and his record on busing in a way that left him sputtering onstage, and that carried the meta-message that she’d be able to confront Trump with the same cool precision.” She also cut through her opponents’ interruption-fest on education with a lighthearted jibe — “America does not want a food fight, they want to know how we’ll put food on their table” — that made her look like the adult in the room.

But other female candidates had strong showings too. Sen. Amy Klobuchar won applause when she took Gov. Jay Inslee to task for saying he was the only candidate to have achieved something on abortion rights. Sen. Kirsten Gillibrand made an impact with her comments on the Hyde Amendment, which bans federal funding for most abortions. Sen. Elizabeth Warren showed the calm and clear grasp of policy that has been her trademark, and Wednesday night’s debate was essentially a referendum on her plans.

Any of the female candidates onstage this week could probably perform well in a debate against Trump, up to and including Marianne Williamson, who would probably out-weird him.

And in all their cases, their gender wouldn’t be a stumbling block they’d have to get over to beat Trump onstage. It would actually help them.

In the 2016 primary debates, when Trump wasn’t zoning out, he was trying to question his opponents’ masculinity and assert his own. He repeatedly called Rubio “Little Marco.” He also took Rubio to task for making fun of his allegedly small hands (a longtime dig against Trump).

“Look at those hands,” he said. “Are they small hands? And he referred to my hands — if they’re small, something else must be small. I guarantee you there’s no problem, I guarantee.”

That was the only time he actually bragged about his penis size, but the implication was there throughout.

It was a piece of his general strategy against his opponents throughout the primary campaign — accuse them in coded or not-so-coded ways of lacking virility, as when he accused Jeb Bush of being “low-energy.”

It makes sense that Trump’s debate and campaign style often devolved into a form of gendered bullying — he spent most of his career in the male-dominated real estate development business. He also spent his formative years at the all-male New York Military Academy, where, as a captain, he was in charge of whipping other boys into shape (until he was reassigned for mysterious reasons).

But treating debate as a literal dick-measuring contest doesn’t work when your opponent is a woman. Instead, Trump has typically resorted to insulting women’s appearance, as when he reportedly said of Republican presidential hopeful Carly Fiorina, “Look at that face! Would anyone vote for that?” He’s also tried physical intimidation, looming creepily behind Hillary Clinton on the debate stage. At a rally soon after, he insulted her body, saying, “when she walked in front of me, believe me, I wasn’t impressed.”

But women, especially those who have been in the public eye, are unfortunately used to these tactics. Take E. Jean Carroll, who says that Trump sexually assaulted her in the 1990s. In response to her story, Trump said she was “not my type” — Carroll, who wrote in New York magazine that Trump was one of several men to attack her over the course of her life, fired back, “I’m so glad I’m not his type.”

Clinton, meanwhile, has written that Trump’s looming made her “incredibly uncomfortable.” But she chose to ignore him and didn’t let it affect her debate performance. “Maybe I have overlearned the lesson of staying calm, biting my tongue, digging my fingernails into a clenched fist, smiling all the while, determined to present a composed face to the world,” she wrote in her 2017 book What Happened.

Her response to Trump’s bluster was to laugh at him, and polls afterward showed Americans thought she won the debates, even though she ultimately didn’t win the election.

Many women have had to learn the same lesson Clinton did — including the women of the 2020 Democratic field. Being in the public eye as a woman can be a trial by fire, and there’s evidence that the women who make it to high office are toughened by the experience. As Golshan writes, some political science research suggests that “because women have to work harder to prove themselves in the electoral process, they actually perform better when they get into office.”

The women onstage largely showed that their experience has made them into effective debaters, easily able to shut down male opponents. Harris certainly showed she knows how to handle interruptions, and Klobuchar’s exchange with Inslee showed she can easily put a man in his place.

None of this shows that a woman can definitely beat Trump in an election — that’s not something we can know at this stage, though research suggests that women are actually just as “electable” as men. There are also lots of factors voters can use to make their primary decisions; “who would win in a debate against Trump” is far from the only question to be asked.

But this week’s debates should put to rest the idea that a woman won’t be able to go head to head with Trump on national TV and win. The women onstage showed their strength this week — and what’s more, recent history shows that where Trump is concerned, they would actually have an advantage.