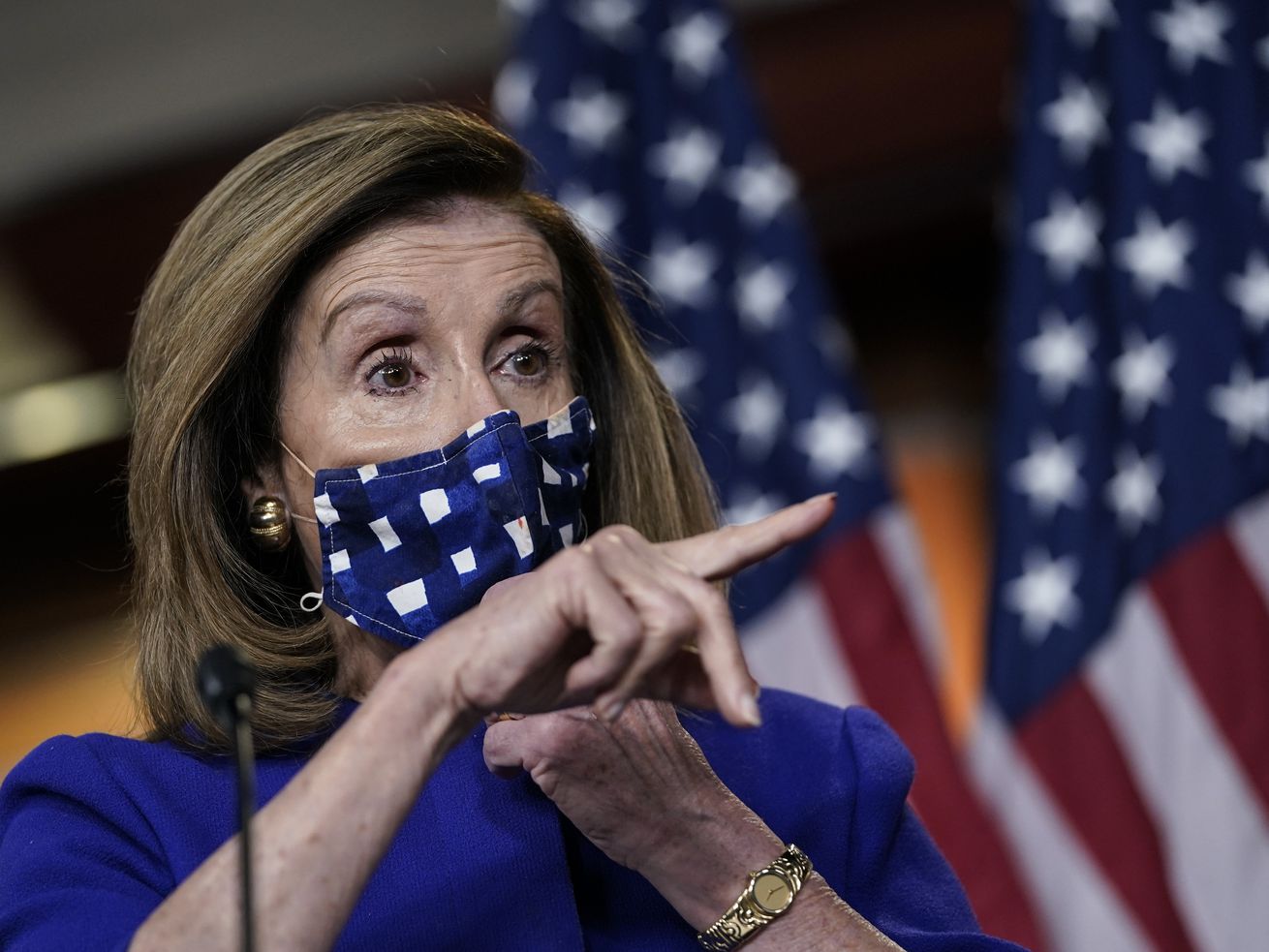 Speaker of the House Nancy Pelosi (D-CA) speaks during a news conference at the Capitol on October 9, 2020, in Washington, DC. | Drew Angerer/Getty Images

The administration’s $1.8 trillion offer is too much for Senate Republicans, not good enough for Pelosi and House Democrats.

House Democrats and White House officials are telling conflicting stories over the status of the long-stalled Covid-19 relief bill negotiations Sunday morning, and a deal before Election Day is looking less likely as time wears on.

On CNN’s State of the Union Sunday morning, White House economic adviser Larry Kudlow told host Jake Tapper that he didn’t think a deal between the Trump administration and House Democrats was dead, despite opposition from many Senate Republicans.

“No, I don’t think it’s dead at all,” said Kudlow. “I think if a deal can be reached, [Senate Republicans] will go along with it.” Kudlow tried to spin the impasse as an issue with Democrats, when in fact it has been the president’s own party presenting the biggest opposition to a deal.

White House economic adviser Larry Kudlow says he doesn’t think the stimulus deal is dead, despite President Trump’s $1.8 trillion proposal facing opposition from Senate GOP. “I think if an agreement can be reached, they will go along with it” https://t.co/Viunv4eaxp #CNNSOTU pic.twitter.com/RNV1O8GzSr

At issue are dueling proposals between House Democrats and White House negotiators. House Democrats passed a revised version of their HEROES Act earlier this month, which now features $2.2 trillion (down from some $3 trillion in the version passed in May) to cover an extension of expanded unemployment insurance and another round of stimulus checks. But the White House has rejected that package and countered with its own $1.8 trillion proposal.

House Speaker Nancy Pelosi said talks “remain at an impasse” in a letter sent out to House Democrats Sunday morning.

“This proposal amounted to one step forward, two steps back,” she wrote in the letter, referring to the negotiations. “When the President talks about wanting a bigger relief package, his proposal appears to mean that he wants more money at his discretion to grant or withhold, rather than agreeing on language prescribing how we honor our workers, crush the virus and put money in the pockets of workers.”

The stakes of passing another stimulus are high. Earlier this week, Federal Reserve chair Jerome Powell warned another coronavirus wave could hit the economy hard, and called for the government to enact more stimulus aid for struggling Americans.

Yet the same day he made that statement, Trump tweeted that he was cutting off negotiations with House Democrats, saying he would only reengage if he wins the election. After a stock market plunge in response to his tweets, and perhaps influenced by his plummeting poll numbers, Trump swiftly reversed himself.

…request, and looking to the future of our Country. I have instructed my representatives to stop negotiating until after the election when, immediately after I win, we will pass a major Stimulus Bill that focuses on hardworking Americans and Small Business. I have asked…

If I am sent a Stand Alone Bill for Stimulus Checks ($1,200), they will go out to our great people IMMEDIATELY. I am ready to sign right now. Are you listening Nancy? @MarkMeadows @senatemajldr @kevinomccarthy @SpeakerPelosi @SenSchumer

But for a deal to happen, Trump needs to get his party’s buy-in. Over 20 Senate Republicans have now publicly said they oppose or are reticent to pass a second round of relief, despite a still-cratering economy, even if the White House agrees to a deal.

It’s perhaps the most firm break the chamber’s GOP members have made from Trump in recent memory.

A new wave of infections could spell doom for the economy

The failure to pass a new stimulus bill is taking place against the backdrop of a struggling economy and worsening pandemic.

Johns Hopkins announced Sunday morning the fourth straight day with over 50,000 new cases of Covid-19 in the US, matching some of the pandemic’s worst numbers since early August. It’s an alarming figure for a fragile economy in a volatile election cycle.

Though the unemployment rate has improved from a high of 14.7 percent in April to 7.9 percent in September, according to US Labor Bureau statistics, the number of Americans applying for jobless benefits remains distressingly high. If the pandemic forces states to go back into lockdown or issue new business closures, the numbers could only get worse.

That could spell disaster for the slowly recovering economy, especially if no deal is reached and Senate Republicans refuse to play ball.