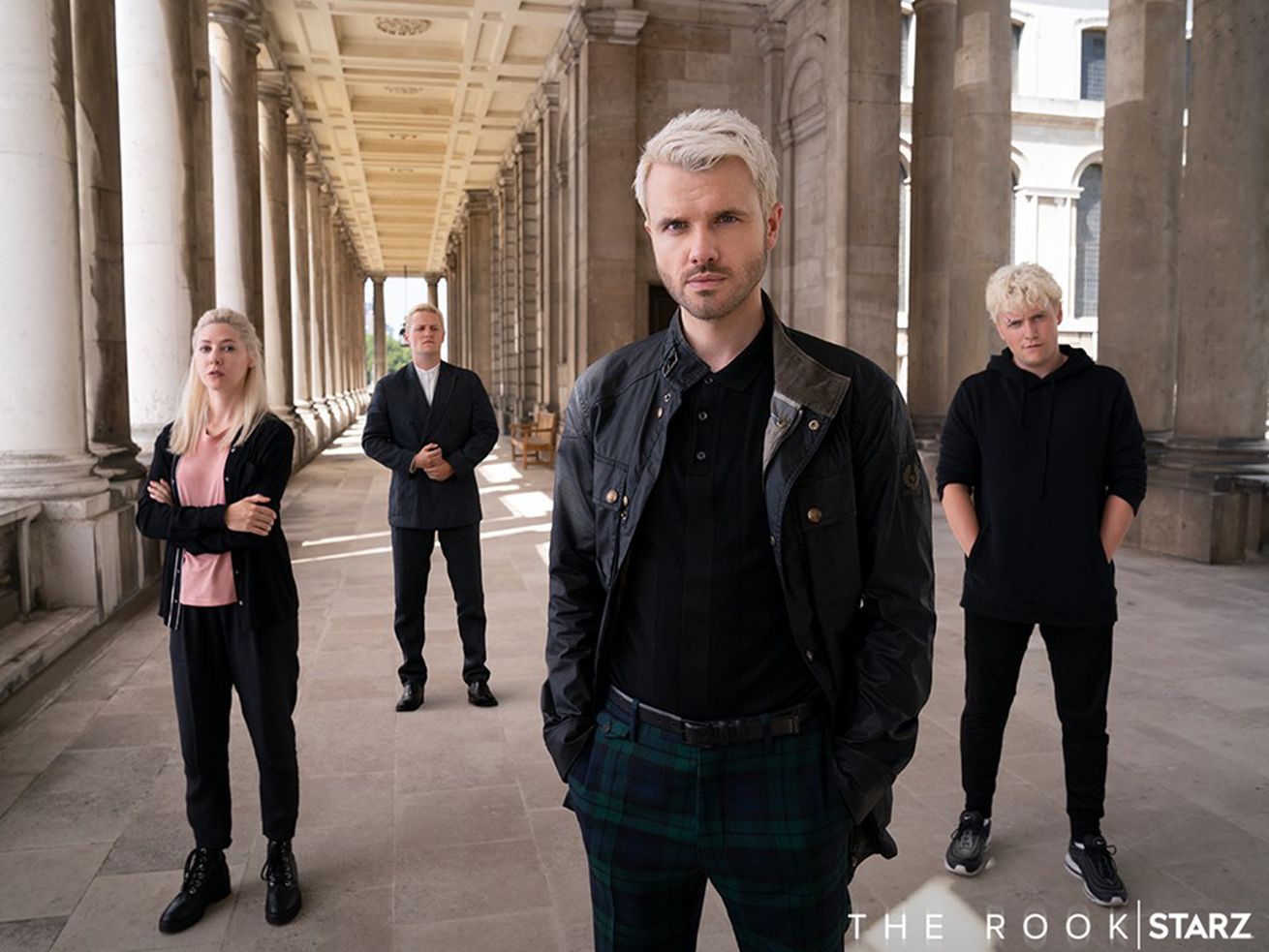 The show is a confusing mixture of bland formula and blazing originality.

Starz’s new sci-fi show The Rook is one of the most weirdly uneven TV shows to debut this year. It’s a bizarre combination of storytelling by bland rote formula, mixed in with a few ideas that are so blazingly new, they make you sort of squint at the screen and say, “But … how?”

Most of The Rook is a generic, supernatural-inflected spy thriller; if you have ever seen an ad for Blindspot, you pretty much have the general gist already: lady with amnesia, powers mysterious even to her, government conspiracies, etc., etc. But part of The Rook is built around a love story between our amnesiac heroine and another character — a character named Gestalt, who is a single consciousness in four bodies, played by three actors. And that plot is something that I have never seen on television before.

The Rook’s latest episode, “Chapter 4,” which aired Sunday night on Starz, is a case study in how deeply inconsistent this show can get. Most of what goes down is a straightforward-enough shadowy conspiracy storyline, with a couple shoot-’em-up scenes just to liven things up a little and a few betrayals that, if you have ever watched TV before, you will see coming from a mile away. But on the other hand, there is Gestalt, and no matter what else is happening onscreen, I never quite see what’s happening with Gestalt coming.

The premise of The Rook is as follows: a young woman named Myfanwy (Emma Greenwell) wakes up covered in blood and surrounded by dead bodies, with no memory of her past life.

Myfanwy (“Rhymes with Tiffany,” we are immediately instructed) rapidly learns that she is an operative for the Checquy, a secret branch of the British government devoted to regulating “EVAs,” or people with “Extreme Variant Abilities.” (They’re X-Men mutants, basically.) Myfanwy herself is an EVA with the power to … zap people with electricity, I guess (it has a fancier name in the show, but that’s basically what it does), but because her powers aren’t particularly strong, she works as a paper-pusher in middle management. Her rank at the Checquy is “rook.”

Now, Myfanwy must go back to work at the Checquy without revealing to anyone that her memories have gone, or that her powers have apparently become strong enough to kill a whole bunch of people. Luckily, she seems to have had some notice that she would soon lose her memory, because Myfanwy’s past self has left her a helpful series of letters and video guides that explain exactly who everyone at the Checquy is and how they relate to her.

Would you be shocked to learn that things at the Checquy may not be entirely on the up and up, and that it may in fact be exploiting the very EVAs it claims to want to protect? Would you be shocked to learn that Myfanwy’s kindly boss Farrier (Joely Richardson) — who Past Myfanwy describes as the only person she can trust, and who is the only one who knows about Myfanwy’s amnesia — is maybe not acting entirely in Myfanwy’s best interests? Too bad, because The Rook sure expects you to be shocked by both those revelations.

The Rook is based loosely on a novel of the same title by Daniel O’Malley, but while I haven’t read the book and can’t confirm, the Hollywood Reporter argues that the Starz show has ditched most of O’Malley’s “fits of grotesque whimsy” in favor of the blandness we find onscreen. That blandness extends to most of the characters, whom Past Myfanwy helpfully explains to us with a character chart that lays out everyone’s basic archetype: there’s ice queen PR agent, the sweetly capable assistant, the apparently sinister but ultimately well-meaning second-in-command, and so on.

Where O’Malley’s “fits of whimsy” appear to have been too entrenched to fully weed out, however, is in the character of Gestalt, another rook at the Chequy. Gestalt looks like a set of quadruplet siblings: one set of identical twins who go by Teddy and Alex (both played Jon Fletcher), and one set of fraternal twins who go by Eliza (Catherine Steadman) and Robert (Ronan Raftery).

All four of those siblings, though, are actually the same person. They have one mind.

Hive mind characters aren’t a new idea. Gestalt, however, is.

Hive mind characters aren’t new to science fiction: Star Trek had the Borg, after all. But it’s still pretty rare to meet a hive mind character with whom we are asked to empathize who doesn’t turn out to secretly be a group of individuals cruelly forced into a collective by an oppressive overlord. And that makes sense, because it’s simple to root for an individual person with an easily understood, singular body to break away from a mass of people who talk in unison and use confusing pronouns. That’s a story that we are trained early on to grasp and to look for.

But that’s not the case with Gestalt. Gestalt really is one person, and what oppresses Gestalt is acting like they’re not.

The Chequy trained Gestalt to compartmentalize as a child, so that each body can perform different tasks. That means Gestalt has four times the operating power of a normal spy: They can be in four different places doing four different things at once, and they don’t have to communicate with each other because what one of them knows, all of them know.

But when Gestalt is alone, they don’t differentiate between their bodies. When we see them get ready in the morning in “Chapter Three,” they move in unison, their bodies interacting with one another only in the way that your hands interact with each other to do up a zipper.

And we can tell that Gestalt feels close to Myfanwy because they stop differentiating themselves around her as well. With everyone else, Gestalt refers to themselves as “we,” as though each body is a separate person, but with Myfanwy they revert to the more truthful “I.”

Things are tense between Gestalt and Myfanwy, though. After a series of suggestive conversations Myfanwy has to bluff her way through, she realizes that she and Gestalt drunkenly hooked up shortly before Myfanwy lost her memory, and now Gestalt thinks Myfanwy is blowing them off. Gestalt dismisses the encounter as a mistake, but when Myfanwy kisses one of Gestalt’s bodies, the others momentarily lose their ability to compartmentalize. The one driving a car gets into an accident.

As Jacob Oller wrote for the AV Club, Gestalt is a fundamentally queer character who by their very presence shakes up the gender binary. And their ability to compartmentalize — to act the way the rest of the world does in an attempt to make other people comfortable — is a potent metaphor for passing in public.

But Gestalt isn’t only interesting because they’re pushing back against the heteropatriarchy. They are also the only character on The Rook who cannot be easily summed up in Past Myfanwy’s neat little character chart, who is doing something new with their trope. That means that in every episode, they feel like a character from some other, much more interesting show.

In “Chapter Four,” it becomes clear how rote most of The Rook is, and how surprising Gestalt’s stuff is in contrast

“Chapter Four” sees The Rook moving its various shadowy conspiracies dutifully around. Monica Reed (played by Olivia Munn, so no points for guessing that her archetype is “sexy American spy”) infiltrates an illegal auction selling EVAs to the highest bidder. We get confirmation that Farrier was trying to sell Myfanwy in a similar exchange the night that Myfanwy lost her memory, and we meet the EVA behind said memory loss.

There’s even a rare, non-Gestalt bright spot in the form of James D’Arcy, who shows up to guest star as Myfanwy’s former therapist. D’Arcy is charismatic enough to make a flat role fun to watch, but even he can’t do much with the fact that his whole part revolves around the question of whether this dude who used to be a doctor in a secret government program training super-powered kids did something kind of messed up. (Spoilers: the answer is yes!)

But while all of that’s going on in the foreground of “Chapter Four,” Gestalt is hanging out in the background, being quietly more interesting than everyone else. They talk to Myfanwy with two bodies (to “dilute the effect you have on me”), and when Teddy’s body starts biting their fingernails and Myfanwy knocks their hand away, Alex’s body starts biting their fingernails instead. Three of the bodies go off on recon with Monica and get separate coffee orders for each body, which they sip in unison.

“Why do you do that?” Monica demands. “Pretend to have different taste in coffee. I mean, it’s all you, right?”

“The illusion of distinct personalities puts other people at their ease,” Gestalt explains as Eliza, and then switches over to Teddy to add, “Which allows me to hide in plain sight.”

“It kinda creeps me out,” Monica says.

Watching Fletcher, Steadman, and Raftery play off each other as Gestalt feels a little like watching Tatiana Maslany do her thing on Orphan Black, only in reverse. Instead of watching doppelgängers develop personalities so distinct that you start to forget that they look identical and are played by the same actress, you’re watching three very different-looking actors — united only by their Children of the Corn dye job — subsume their differences into one personality. When they’re on, you forget that Gestalt is played by three separate people, because it’s all just Gestalt.

But Fletcher, Steadman, and Raftery also have a leg up over the rest of Rook’s cast, because they at least are working with material that the audience hasn’t seen a thousand times before. Rook is a trope-based show, but it is sleepy in its use of tropes; it feels as though it’s relying on a formula not because of any real affection for that formula but because it’s too lazy to do anything else.

Gestalt, though, is a character who doesn’t follow formula, who is based in tropes but does new things with them. And that means that when they are onscreen, this weird and sleepy show has no choice but to wake up.

A confession: I don’t particularly care what happens with Myfanwy and her quest to find out why she lost her memories. I kind of do want to keep watching The Rook, though, just to see what Gestalt does next.