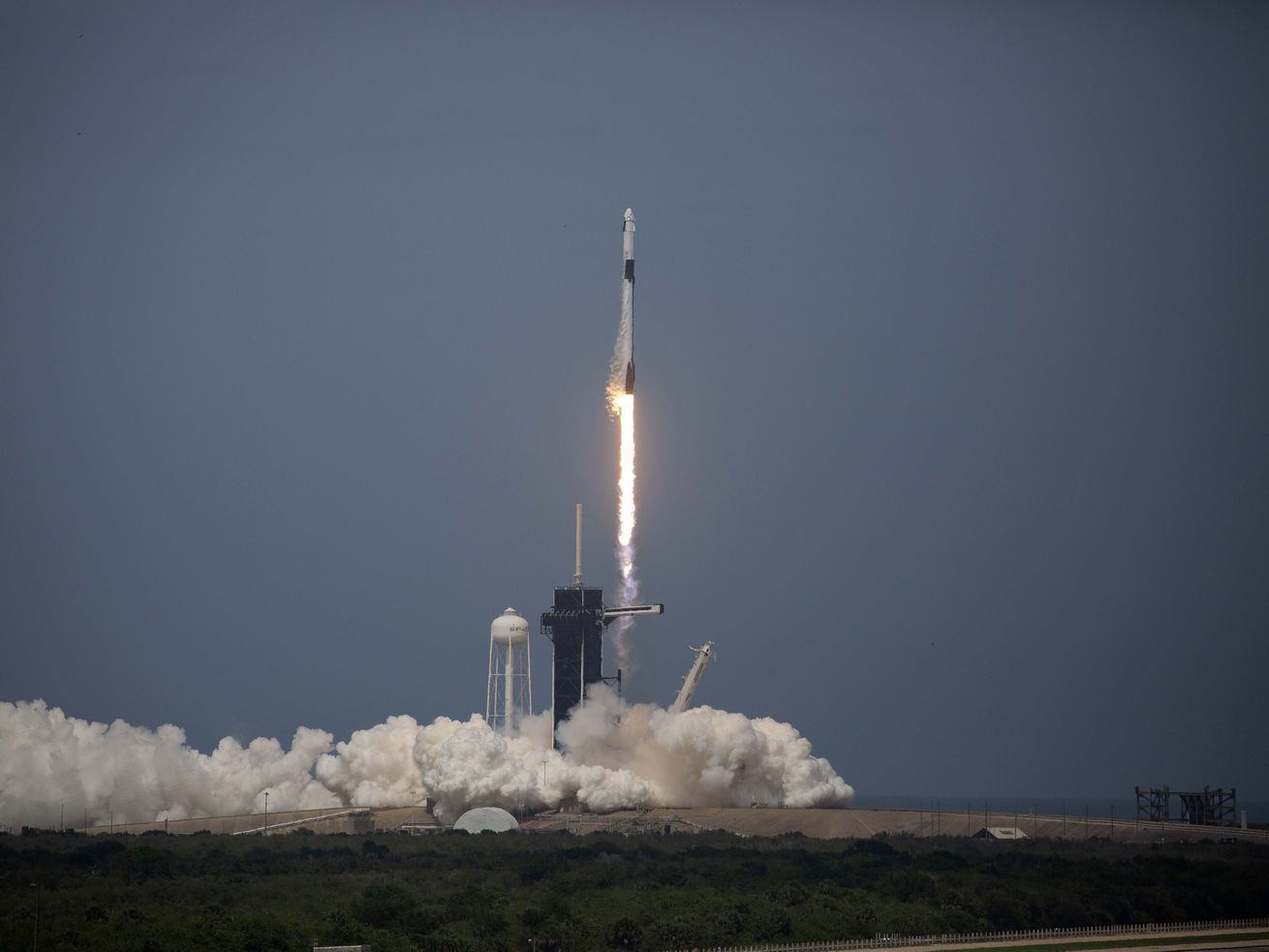 The SpaceX Dragon Capsule Demo-2 sent two NASA astronauts to orbit on Saturday, the first time a private company has ever sent a crewed mission to space. | Getty Images

SpaceX’s Crew Dragon Demo-2 is off to a roaring start. After a delayed launch earlier in the week, the spacecraft lifted off at 3:22 pm ET on Saturday. It left the planet, and entered Earth’s orbit where it will later dock with the International Space Station (ISS), beginning a new era of commercial space tourism and exploration — all with the help of mercurial billionaire Elon Musk.

If all goes as planned, the Crew Dragon capsule, which rides on the top of SpaceX’s Falcon 9 rocket, will make a 19-hour trip to the ISS. The capsule is designed to fly mostly autonomously, but astronauts Robert Behnken and Douglas Hurley will take the controls while in Earth’s orbit to test out its manual capabilities. Docking with the ISS, however, is supposed to be completely autonomous, which is a new feature of the upgraded capsule. A second version of the capsule, the Cargo Dragon, is designed to use this automated docking for seamless deliveries to the ISS. After docking, the astronauts will live on the space station for a few months — the exact timing is not yet decided — before getting back in the Crew Dragon and returning to Earth.

Watch the launch and flight below:

As smoothly as the Saturday launch went, the mission’s success was not a certainty. Originally planned for Wednesday, that launch was canceled due to weather, and SpaceX’s program has suffered a few setbacks in its years-long quest to send people into space, including a few rocket launch failures. On Friday, a prototype of its Starship exploded during an engine fire test. Meanwhile, the new mission is called Crew Dragon Demo-2, because the Crew Dragon Demo-1 spacecraft exploded during a test in 2019. Before its failure, however, Demo-1 did make a successful uncrewed test flight to the ISS.

Assuming the rest of the mission goes according to plan, Crew Dragon Demo-2 will represent the biggest step yet toward the next phrase of space travel, where vessels owned by private companies, rather than government bodies, send astronauts and paying tourists into orbital space. Part of this exciting future could involve space exploration, including trips back to the moon and on to Mars. It will also show us the true potential of the space tourism industry.

Space tourism isn’t completely new. Seven people have paid their way into orbital space, though none since 2009. They took rockets through the Russian space program, but it looks like the American companies will lead the way in the future of commercial space travel. Other US-based private companies founded by billionaires, like Richard Branson’s Virgin Galactic and Jeff Bezos’s Blue Origin, are hoping to offer trips into suborbital space as early as this year. Both companies hope to go further, with Virgin Galactic dreaming of “Earth orbiting hotels” and Blue Origin envisioning flying people “to Earth orbit and beyond.”

Aside from the historic nature of a private space company sending a crewed mission into orbital space for the first time ever, NASA was particularly excited about this SpaceX launch, because it signals its return to sending people into space from American soil. Since the end of the Space Shuttle program in 2011, NASA astronauts have been forced to buy seats on Russian rockets to get to space. Having the SpaceX option available means cheaper seats and, of course, national pride. By partnering with private companies like SpaceX and Boeing for its Commercial Crew program — giving them billions in government funding to build their own vessels — NASA still saves billions of dollars over its old model, a purely government-run space flight program that hired private companies to manufacture its equipment.

“The ownership of the intellectual property also incentivizes the companies to find new sources of revenue to further increase their return on investment,” Casey Dreier, chief advocate and senior space policy adviser for The Planetary Society, told Recode. “This seems to have worked, as we see that both Boeing and SpaceX are developing crew vehicles at a cost savings we haven’t seen in the modern era.”

Now that it’s launched humans into orbit, it seems clear that SpaceX has a significant lead over its competitors in the commercial space industry. This is after the company foundered for several years before successfully launching its own rockets, then building a successful business sending satellites into orbit and delivering supplies to the ISS over nearly 100 launches. SpaceX was also able to create a partially reusable rocket that can return itself to Earth and land on a drone barge — which also went off without a hitch on Saturday. Reusing the rockets cuts the cost of each launch significantly for SpaceX and, therefore, lowers the price for its customers.

The shift from a publicly funded space program to a privately led one is reflected in everything from Crew Dragon’s interior to its astronauts’ exterior. Sleek touchscreens have replaced the dials and switches that dominated the NASA shuttle cockpits, and the astronauts are wearing cool, new-look spacesuits specially designed for SpaceX by a movie costume designer. Notably, astronauts Behnken and Hurley rode out to the Crew Dragon Demo-2 in white Teslas emblazoned with NASA logos.

Then, of course, there’s Elon Musk, who founded SpaceX in 2002 and has since become a bit of a madman celebrity. Musk’s erratic behavior over the years has drawn controversy and negative attention to the companies he runs — including, for Tesla, a $20 million fine from the Securities and Exchange Commission — but he behaved himself on the scene of his ship’s historical launch.

“This is the culmination of a dream,” Musk told CBS ahead of the launch. “This is a dream come true.”

Mars and the Moon: The next steps for privately operated spaceflight

With this crucial first crewed flight achieved, the question now becomes: what’s next? What will the future of commercialized space travel look like? Will Mars be covered with Tesla ads? Will Earth stores sell real moon rocks? Will Jupiter be populated with Amazon warehouses? Should we book moon hotel reservations now to beat the rush?

All we know for sure now is that commercial space travel does have a future, and experts are optimistic about what it holds.

“NASA’s Commercial Crew Program with SpaceX and Boeing is restoring American launch capability to the ISS, which is an amazing facility that orbits our planet every 90 minutes,” Mary Lynne Dittmar, president and CEO of the Coalition for Deep Space Exploration, told Recode. “The ISS is a critical testbed for a huge range of technologies needed for humans to venture deeper out into space, to the Moon and beyond to Mars.”

But they also stress that private companies aren’t doing this alone. Space tourism is currently an option only for the very rich. Few people can afford the current $55 million price tag for a seat on one of SpaceX’s rockets. Governments, however, have deeper pockets. SpaceX could not have achieved its recent success without NASA’s funding, and that will likely also be necessary as the limits of space travel continue to be pushed.

“Commercializing space, particularly with humans, is still very tenuous,” Dreier, from the Planetary Society, said. “It’s important here to remember that this ‘commercial’ program has the government as its primary customer. The market for human spaceflight in Earth orbit is still unknown.”

The economics of space travel will also have an effect on space research. As Dreier explained, private investment in space might prioritize certain kinds of missions over others, leaving science-driven missions with no obvious financial return to continue to rely on public funding.

Ariel Ekblaw, the founder and lead of MIT Media Lab’s Space Exploration Initiative, offered a more specific interpretation of what the future of commercial space travel might look like.

“I view this very much as part of a broader ecosystem of development that we’re seeing for commercial activity in low Earth orbit,” Ekblaw told Recode.

To that end, companies like Bigelow and Axiom have proposed building their own commercial space stations. Spacecraft built by SpaceX, Virgin Galactic, Blue Origin, Boeing, and others may be the primary mode of transportation to them.

Looking beyond low Earth orbit is NASA’s Artemis Program, which hopes to put humans back on the Moon by 2024. NASA recently gave SpaceX, Blue Origin, and Dynetics $1 billion to create human lunar landing systems. There’s also the possibility that businesses will be, well, businesses, putting money over making space accessible to all. One of the goals at MIT Media Lab’s Space Exploration Initiative involves democratizing access to space exploration by encouraging and helping people from all disciplines to do or send their work into space.

“The public should have some voice in this,” Ekblaw said. “Space really is one of the most ultimate examples of the commons for humanity, so we should be thoughtful in the way in which we’re going about commercialization in low Earth orbit.”

And, of course, there’s that crewed mission to Mars, largely seen as the next frontier in human space exploration and Musk’s impetus for starting SpaceX in the first place. Ekblaw thinks that will happen in our lifetime.

“I do still see NASA and space agencies as having a major role in that achievement,” Ekblaw said. “But the technology for transportation to get us there may very well come from Elon Musk or Jeff Bezos.”