THE father of teenager Sophia Floersch has revealed the agonising minutes he waited to discover if his daughter had survived her horror 170mph crash at the Macau Grand Prix.

German racer Floersch, 17, underwent an 11 hour operation to save her from paralysis after she cheated death on Sunday.

Dad Alex has spoken for the first time since the shocking incident and admits he feared his daughter had been killed when her car flew through the air into a temporary photographers’ platform.

But he insists he will not stand in the way of her getting behind the wheel of a racing car again once she has recovered from her injuries.

Alex told the Mail: “Those 30 or 40 minutes after the crash were the hardest minutes of my life.

“Trying to find her was very difficult. I did not know what was going on. All sorts of concerns come into your mind at a time like that.

“The surgery went well. She is awake and things are going smoothly after the operation.

“The doctors say that if everything continues to progress satisfactorily that she will be in hospital in Macau for six or seven days before flying back to Germany.

“I am sitting at her side now and she’s just happy the surgery is done. Things will get better every day. But for now she has some pain — the drugs are wearing off.

“We have not yet spoken about whether she will race again — it is too soon for that — but from my point of view there is nothing I would do to stop her.”

most read in motorsport

LUCKY TO BE ALIVE


F3 driver has successful 11-HOUR back operation after horror crash


Who is Sophia Floersch and what happened in crash at Macau F3?

Floersch was injured on the fourth lap of the F3 Macau GP when her Van Amersfoort Racing car hit the back of rival Jehan Daruvala.

It saw the teenager lose all control at 172mph as her car was catapulted into the air, through a safety fence before crashing into a temporary structure trackside.

Four spectators were also injured as the crowd was left fearing the worst in silence following the force of the impact. 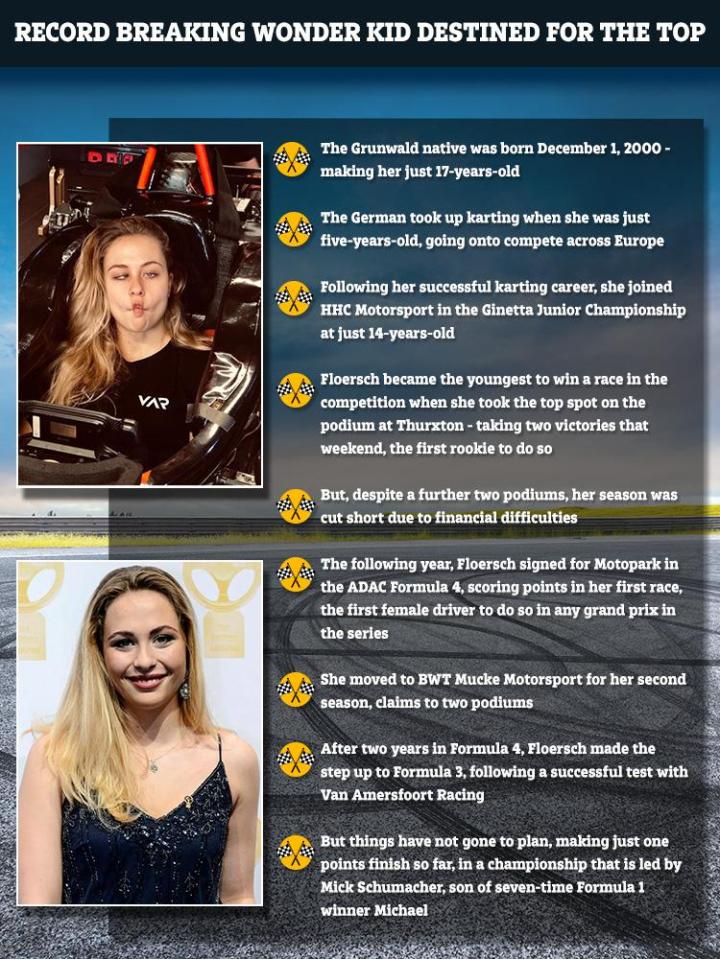 But FIA medics who rushed to the scene were relieved to discover Floersch was still conscious – and she was taken to a local hospital for the operation which has been a success.

The teenager is expected to remain in Macau for another week before being allowed to fly back to Munich where the rest of her anxious family have been receiving regular updates over her condition.

Dad Alex added: ‘The FIA and all the medics did a great job and I would like to thank them for everything they did.”