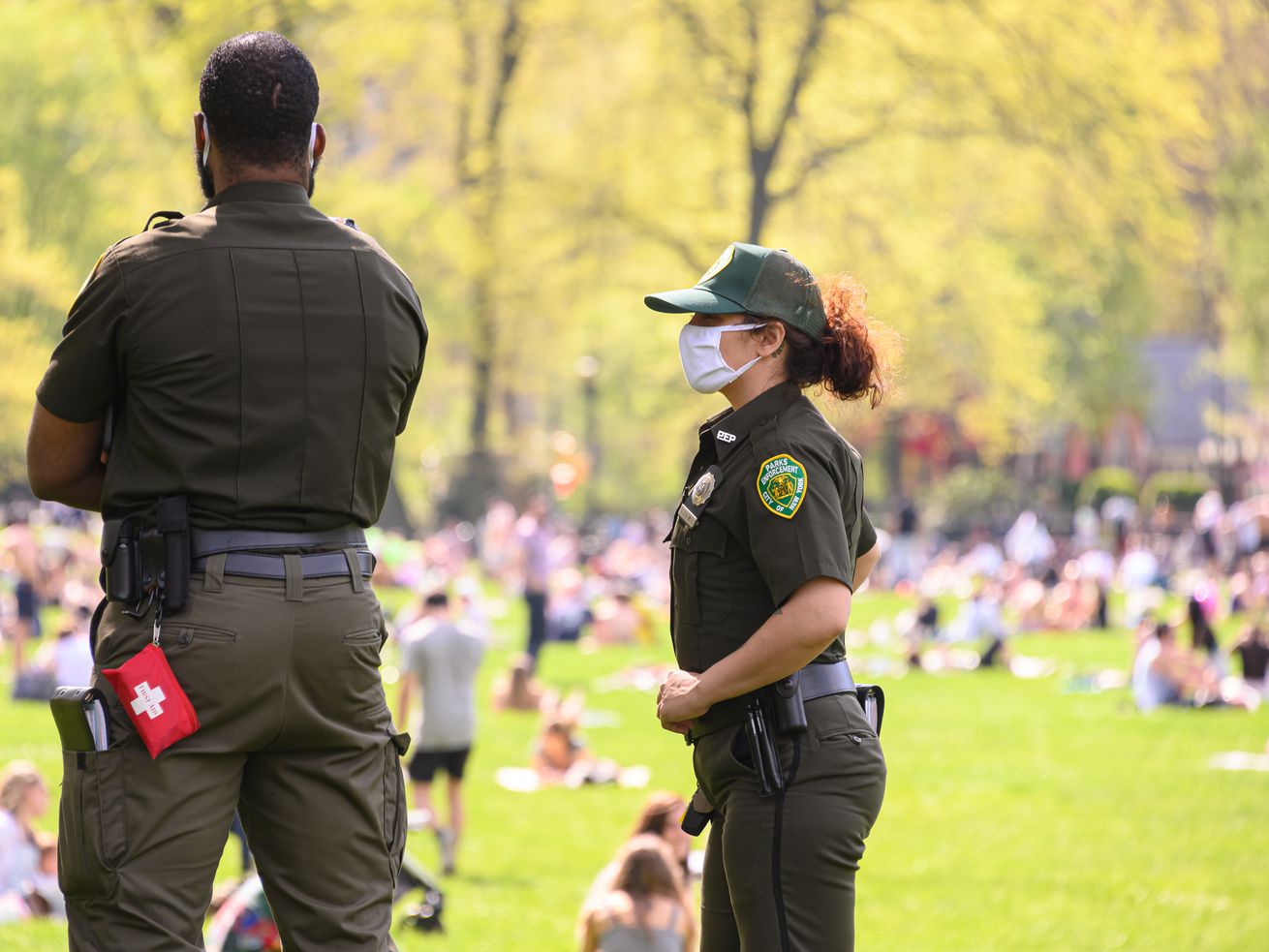 “Why is anyone surprised with this?”

Since shelter-in-place orders were implemented throughout the US, there has been a growing number of videos showing police using excessive violence when arresting people of color for social distancing violations.

In San Diego, a black woman was arrested for walking her dog in Ocean Beach on May 1. Video of the arrest shows three officers repeatedly slamming the woman to the ground while putting her in handcuffs.

In Los Angeles, police donned riot gear, formed a skirmish line, and used their batons to disperse a large birthday party that had gathered in the city’s predominantly black Hyde Park neighborhood in late March, according to a video taken at the gathering.

Meanwhile, in New York City, several videos of excessively violent social distancing arrests of people of color have gone viral. This has come in sharp contrast with other viral videos and photos of police in white neighborhoods within the city calmly handing out masks to park-goers.

While racial breakdowns of many localities’ arrest records have not yet been made public, early data out of New York City shows that social distancing policing is falling heaviest on black people and other communities of color.

Arrest data released late Thursday by the Brooklyn District Attorney’s office showed that between March 17 and May 4, 40 people were arrested for violating the city’s social distancing order. Of those 40 arrests, 35 were black, four were Latinx, and one was white. More than a third of the arrests came in the borough’s predominantly black Brownsville neighborhood.

Brooklyn district attorney Eric Gonzalez told the New York Times that he’s reviewing the arrests to determine if charges are necessary. At this point in the pandemic, his office has declined to prosecute misdemeanor cases that do not involve public safety threats, including social distancing arrests.

“We cannot police our way out of this pandemic,” Gonzalez told the Times.

But Brooklyn’s numbers reflect a larger trend throughout the rest of the city. According to a CBS2 report, 120 people were arrested for violating the social distancing order between March 16 and May 5; almost 68 percent of those arrests were black and 24 percent were Latinx, while only 7 percent were white.

And yet Jennvine Wong, a staff attorney for the Cop Accountability Project at the Legal Aid Society, told Vox that the data may not be capturing the full picture of the NYPD’s actions — it could be a lot worse. “I’m not exactly sure how the NYPD is categorizing [social distancing arrests] and if they have one code that they’re categorizing it under or their methodology in doing so,” she said, referring to how people may be getting charged with something else. “It’s one of the reasons why we did ask and request from the NYPD some more details with respect to their enforcement guidelines, but we haven’t received that information as of yet.”

Wong compared the social distancing orders with stop and frisk, which effectively allowed police to stop anyone on the suspicion of a crime. “It’s hard to tell whether or not, for example, [with] a criminal possession of marijuana case, that person was approached because of social distancing or because there was some other reason for the approach that gave the officer some sort of reasonable suspicion to stop that person,” she said. “I think that is exactly where you see people drawing this reference to stop and frisk.”

New York City Mayor Bill de Blasio initially defended the NYPD’s social distancing arrest policy at a news conference Thursday. “What happened with stop and frisk was a systematic, oppressive, unconstitutional strategy that created a new problem much bigger than anything it purported to solve,” he said. “This is the farthest thing from that. This is addressing a pandemic. This is addressing the fact that lives are in danger all the time. By definition, our police department needs to be a part of that because safety is what they do.”

But after the Times reported the racial disparities in the arrest data, de Blasio changed his tune, promising on Twitter to “do better.”

Saving lives in this pandemic is job one. The NYPD uses summonses and arrests to do it.

Most people practice social distancing, with only hundreds of summonses issued over 6 weeks. But the disparity in the numbers does NOT reflect our values.

We HAVE TO do better and we WILL. pic.twitter.com/VFEFV724wU

The arrests of people of color for violating social distancing orders are painted in sharp relief against the backdrop of wide-scale — and heavily white — protests against those same orders across the country.

Armed white men have demonstrated and protested at numerous state Capitols and in big cities all over the US without drawing much of a reaction from local police at all. In Texas, a white woman who was jailed for opening her salon business in defiance of the state’s order became the cause du jour for conservative lawmakers in the state. She was released from Dallas county jail after a state Supreme Court ruling.

The racial disparity in policing wasn’t a surprise to Gloria J. Browne-Marshall, a professor of criminal justice at John Jay College in New York City. “Why is anyone surprised with this when we have police and other white people killing black and brown people with impunity?” asked Browne-Marshall.

Excessive policing of black and brown communities has been at the heart of American policymaking for 400 years, she told Vox. It’s not surprising that this has carried on into the coronavirus pandemic.

“This over-policing and over-criminalization of people of color, black and brown people, needs to actually be viewed from a different perspective,” Browne-Marshall said, explaining how these arrests cascade into larger issues for people of color. “Now you have people [who were arrested], if they did have a job, now they have more difficulties keeping that job. Which means there are more difficulties keeping their families together. And we’ll have another media article on the disproportionate number of housing issues when it comes to people of color.”