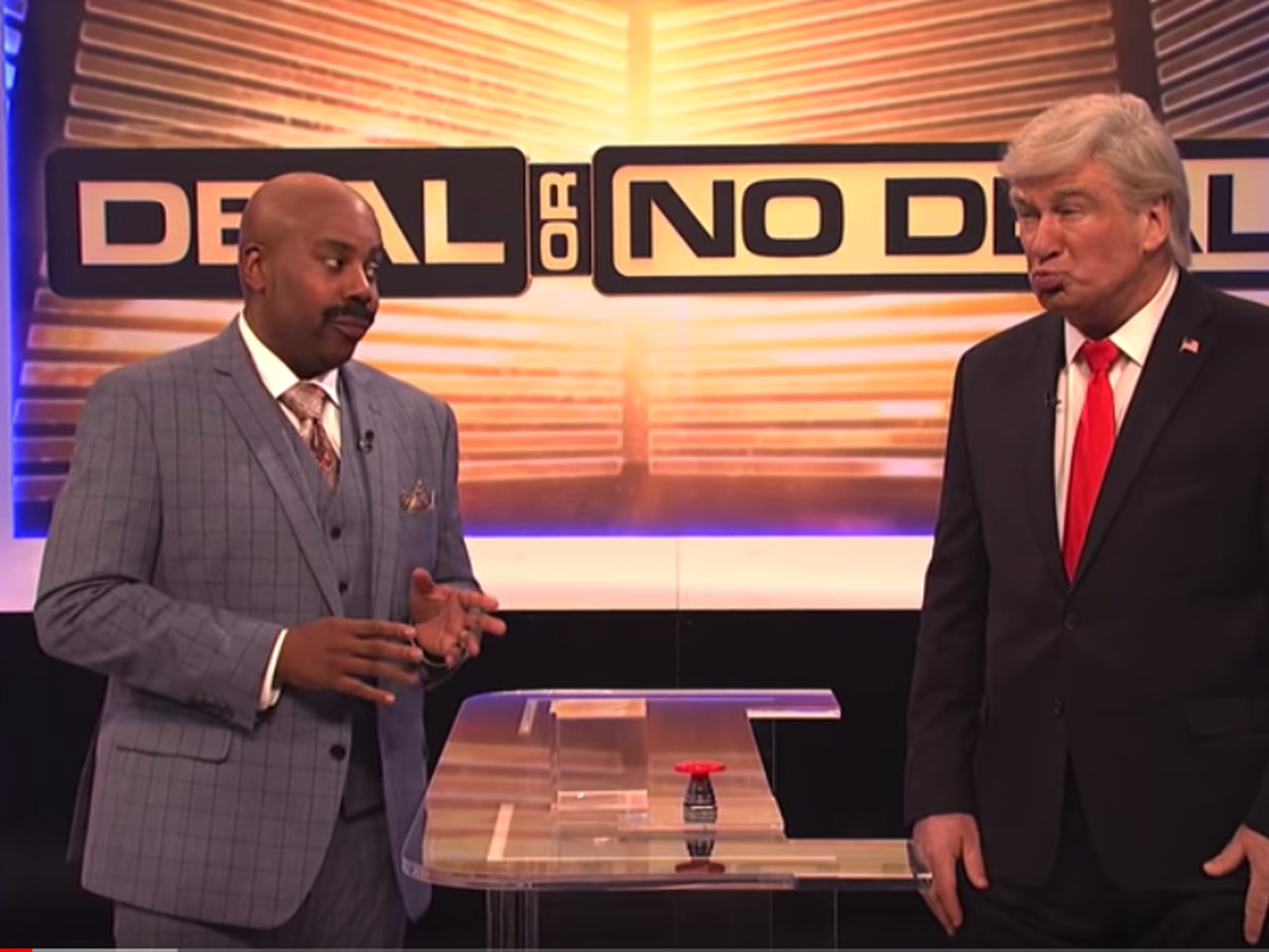 Kate McKinnon’s Nancy Pelosi is drunk on her own power.

If only a simple hamberder, er … hamburger, was all it took to make this government shutdown mess melt away.

That’s the alternate reality projected through the lens of the latest Saturday Night Live’s cold open, where negotiations to end the nearly month-long shutdown boil down to an episode of Deal or No Deal.

Of course, negotiations to end the partial government shutdown must come in the form of a game show — not only is the format a longtime crutch for SNL (in fact later in the show, there’s yet another game show, “Millennial Millions,” again hosted by Thompson), but as we’ve seen time and time again, reality TV is the ideal environment for our president.

”Earlier today you went on TV and you told the American people that you wanted to make a deal,” Thompson’s Harvey told Baldwin’s Trump. “So we decided to do this in the only format you could understand: a TV game show with women holding briefcases.”

In satire, just as in reality, Trump’s deal is functionally dead on arrival. The president still insists on getting his $5.7 billion border wall, this time in exchange for extending existing protections for DACA recipients — but only temporarily. Democrats have little incentive to take the deal, and few reasons to trust Trump on any promise involving immigration. And in SNL’s vision of the deal-making process, Nancy Pelosi is House Speaker who isn’t above taking a victory lap for this round of negotiations.

Actress Kate McKinnon plays Pelosi as a cutting political operative who is drunk on her own power (or as Baldwin’s Trump calls her, “Fancy Nancy Peloser”). Her counter-offer to end the shutdown: $1 billion in border security funds, and for Trump to say “Nancy’s my mommy.”

McKinnon’s Pelosi takes ruthless joy in the petty back-and-forth that’s played out in real life this week between the president and Democratic leader.

“We’re still fighting Mr. Trump,” McKinnon says, barely hiding Pelosi’s glee. “I’m so sorry Mr. President. If the government’s shut down, you can’t do the State of the Union. It’s for security reasons, not because I’m vindictive or anything.”

The rest of the ensemble of potential deal-makers flutters between old stereotypes (Chuck Schumer, played by Alex Moffat, is called an “older Jewish woman”; his shutdown offer is $15 plus a pastrami on rye) and unoriginal jokes (Mitch McConnell, played by Beck Bennett, hides behind his briefcase like a turtle crawling into his shell).

But of course, it’s a clueless college student who comes out with the win. Pete Davidson plays a Clemson College football player, who doesn’t have the typical metal briefcase encasing a deal. Instead, it’s a crate of White Castle sliders, a nod to the fast food smorgasbord that Trump offered the college champion football team when hosting them at the White House earlier in the week.

“I’m going to make that deal!”

If a crate of hamburger’s were the difference between opening the federal government and not, then White Castle, the ball’s in your court.