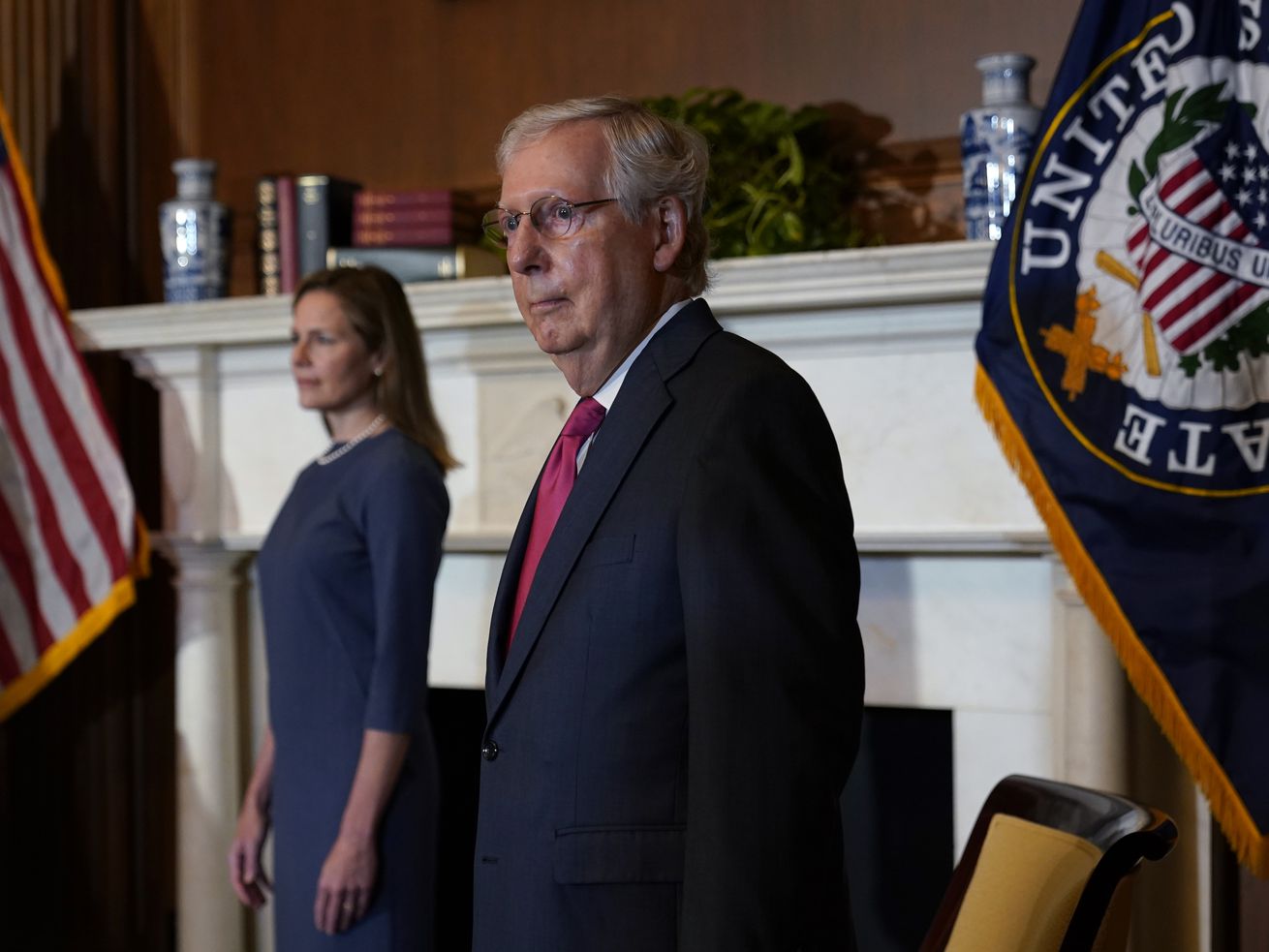 Many voters want the Senate to prioritize stimulus.

Senate Republicans haven’t shown much interest in prioritizing relief for the devastating economic situation caused by the pandemic — even as it reaches a new inflection point with President Donald Trump testing positive for the coronavirus this week.

Trump’s test results gave the stock market a slight jolt on Friday and a recent report revealed that jobs growth has been less than robust. But GOP members in the upper chamber have focused instead on their expedited process for the confirmation of Judge Amy Coney Barrett, Trump’s pick for the Supreme Court — leaving many to wonder if any relief will happen at all before the election.

Thus far, the party has been split on more expansive spending. While Republicans put up a “skinny stimulus” for a vote in September — which Democrats deemed insufficient — additional progress has stalled since. And even as Republicans move to complete an especially swift Supreme Court confirmation, they’ve treated stimulus for millions of Americans grappling with layoffs and evictions with much less urgency.

“It’s really incredible what a stilted set of priorities the Republicans and Donald Trump have,” Sen. Ron Wyden (D-OR) told Vox. Senate Majority Leader Mitch McConnell, meanwhile, has argued that Democrats are at fault for blocking Republicans’ earlier coronavirus bill, which they voted against because they saw the aid as not being comprehensive enough, particularly as it relates to state and local governments. He also expressed some renewed optimism on Friday and noted that talks — which have been led by House Speaker Nancy Pelosi and Treasury Secretary Steven Mnuchin — “have speeded up in the last couple days.”

This week, Pelosi and Mnuchin attempted to resume negotiations on a potential deal, though they stalled once again over recurring disagreements on five key areas, including state aid funding levels and language around coronavirus testing and contact tracing. Sans a compromise, House Democrats on Thursday evening passed a revised version of the HEROES Act that includes $2.2 trillion to cover an extension of expanded unemployment insurance and another round of stimulus checks. Whether Trump’s coronavirus diagnosis will spur more momentum for an agreement is still unclear.

In recent votes, both parties have broadly held onto positions the other has already rejected, and they’re respectively facing heat to approve more aid. Senate Republicans’ treatment of a Supreme Court nomination as one of their most pressing matters, however, indicates exactly how much they value their latest power grab compared to support for the American people.

Recent polling from Data for Progress shows that people are interested in lawmakers addressing a new stimulus package before moving forward on a Supreme Court nominee.

When asked what the Senate should prioritize, 65 percent of survey respondents said the body should focus on passing legislation to address the economic and health impacts of Covid-19, compared to 22 percent who said the same about advancing a Supreme Court nominee. The survey included 827 adults and was fielded the week of September 22.

The polling response ultimately varied by party: An overwhelming majority of Democrats — 85 percent — favor lawmakers working on Covid relief first, compared to 59 percent of Independents and 44 percent of Republicans.

At this point, lawmakers in both parties are getting voter scrutiny over the inaction on additional stimulus — though experts have told Vox that Republicans could be penalized more in the upcoming election because they currently control both the White House and the Senate.

In a mid-September survey from Financial Times/Peterson Foundation of 750 battleground voters, 91 percent of respondents said Congress needs to pass another coronavirus stimulus and 41 percent of those surveyed blame both parties for the delay. Presently, the need for more stimulus is significant: More than 26 million people are still claiming some type of unemployment benefit, according to a weekly Labor Department report, and more than 100,000 small businesses so far are estimated to have closed permanently during the pandemic.

It’s been months of on-again, off-again stimulus discussions, and this week was seemingly no different.

Pelosi has said that negotiations with Mnuchin will continue, but it appears the two still haven’t been able to work through some ongoing sticking points, which the speaker detailed in a “Dear Colleague” letter on Friday. In addition to questions over the amount of funding for schools and local governments, Pelosi noted that Democrats were pushing for money to cover the Child Tax Credit and Earned Income Tax Credit as well as higher levels of funding for unemployment insurance.

Pelosi this week also noted that Democrats have already reduced their demands for stimulus spending from $3.4 trillion to $2.2. trillion while calling on Republicans to come up some. Republicans have moved forward slightly — and Mnuchin’s compromise landed around $1.6 trillion — but McConnell dinged the House’s $2.2 trillion figure as “outlandish.”

Interestingly, Pelosi has also added that she’d support advancing a stand-alone bill to help airlines avoid layoffs and continue covering their payrolls, even as she’s been reluctant to greenlight other stand-alone legislation, like a measure to boost unemployment insurance.

“‘Why not take something instead of nothing?’ Why should that be the standard for America’s children? We have to fight for the best we can get to them, and I feel certain we will have a level of success,” she had previously said in a Thursday floor speech, addressing questions she’s received about her resistance to backing other carve-out bills. In a statement about airline aid, Pelosi referenced specific losses in certifications that employees could experience as a result of layoffs as one of the rationales for supporting this legislation.

Moderate Democratic members have been pushing Pelosi to consider additional compromises on the stimulus package while vulnerable Republicans have grown increasingly antsy in the Senate as well, Politico reports.

For now, Senate Republicans haven’t really indicated what next steps on stimulus look like. They have repeatedly emphasized, though, that they’re deeply determined to stick to a quick-moving schedule for Barrett’s confirmation, with a hearing set to begin on Monday, October 12.