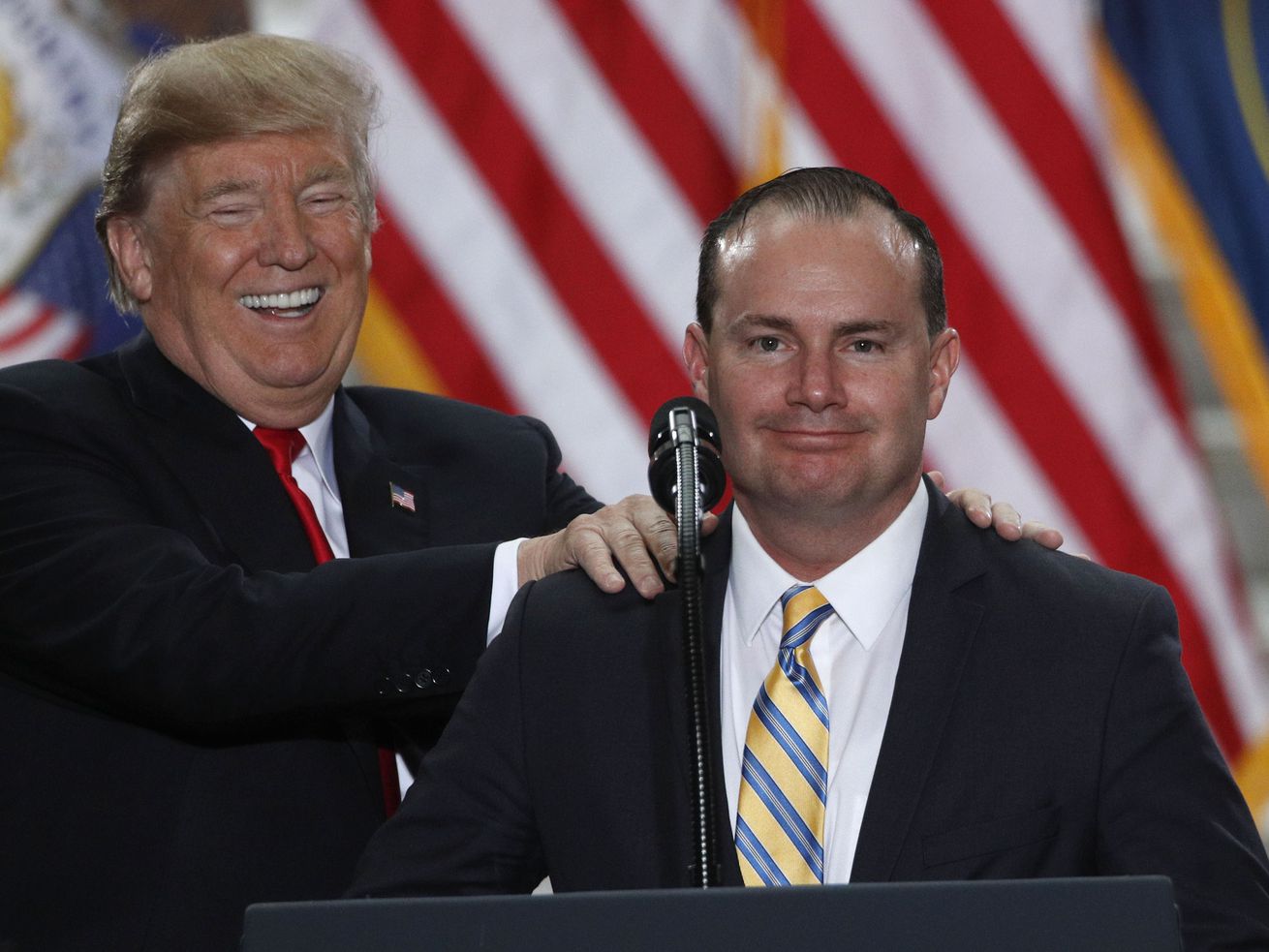 A prominent Republican senator set off a controversy by tweeting that “we’re not a democracy.” Here’s what he actually meant — and why the seemingly minor controversy actually matters.

It’s not often that you see a US senator declare that “we’re not a democracy,” let alone to paint that as a good thing. Yet that’s exactly what Sen. Mike Lee (R-UT) did in a pair of tweets spanning Wednesday night and Thursday morning, arguing that “democracy isn’t the objective; liberty, peace, and prospefity [sic] are.”

“We want the human condition to flourish. Rank democracy can thwart that,” Lee writes.

This may sound like an endorsement of authoritarianism, and there’s reason to think it actually is. But understanding Lee’s comments on their own terms requires a little more charity — and subtlety.

On the American right, there is a long tradition of arguing that the United States is a “republic, not a democracy,” a distinction its proponents trace back to the founders. It centers not on whether a nation holds competitive elections but the extent to which it puts constraints on majorities from restricting the rights of minorities. Democracies, on this definition, allow for untrammeled majority rule; republics put in place rules that prevent legislators from using their power in tyrannical ways (think the Bill of Rights).

Conn Carroll, Lee’s spokesperson, framed the tweets in that tradition in a statement, saying that recent Democratic proposals to reform America’s political institutions amount to the bad kind of “democracy” the founders warned about.

“At a time when Democrats want to pack the Court, eliminate the Electoral College, and turn the Senate into the House, it is very good that Americans are re-reading The Federalist Papers to rediscover why the founders put these specific republican checks on democratic passion into the Constitution,” he told me in an email.

The problem is that the underlying reading of early American documents is quite wrong. When the founders inveighed against “democracy,” they were warning against something very different — direct democracy rather than the election of representatives — that isn’t really on the table in modern America.

The spin offered by Lee and others on the right, historically speaking, originated as arguments for curbing democracy in the ordinary sense of the word — the ability of majorities to enact popular policies (that conservatives disapproved of). Warning against “the tyranny of the majority” serves as a justification for minority rule.

It can also serve as justification for something worse. At a time when President Trump is calling for the prosecution of Barack Obama and Joe Biden, while both he and Vice President Mike Pence refuse to commit to a peaceful transfer of power, this kind of talk isn’t just a harmless dispute over political theory.

It is true that the founders were deeply concerned about tyranny of the majority — the passions of the many leading to a trampling on the rights of the view. It’s also true that they were deeply skeptical about something they called “democracy.”

“Democracy never lasts long,” John Adams wrote in 1814. “It soon wastes, exhausts and murders itself. There never was a Democracy Yet, that did not commit suicide.”

But when they talk about “democracy,” they don’t mean the concept as we ordinarily understand it. As the New York Times’s Jamelle Bouie shows in an excellent 2019 column, the founders were actually preoccupied by democracy as practiced in ancient Athens, a society where all adult male citizens voted on policy measures rather than electing representatives to do the voting for them:

When James Madison critiqued “democracy” in Federalist No. 10, he meant the Athenian sort: “a society consisting of a small number of citizens, who assemble and administer the government in person.” This he contrasted with a “republic” or “a government in which the scheme of representation takes place.” Likewise, in a 1788 speech to the New York ratification convention, Alexander Hamilton disavowed “the ancient democracies in which the people themselves deliberated.” They “never possessed one good feature of government,” he said. “Their very character was tyranny; their figure deformity.”

In short, what we call “representative democracy” today — a system of government where people elect leaders to make policy — is what the founders called a “republic.” Their attacks on “democracy” in the Athenian sense does not mean that America is not a democracy in the contemporary sense.

Nowadays, the terms “democracy” and “republic” generally refer to different kinds of things in comparative political science. “Democracy” contrasts with “authoritarianism,” referring to whether the head of government (who makes policy) is chosen in free and fair elections. “Republic” contrasts with “monarchy,” referring to whether the head of state (the symbolic leader of the nation) comes from a hereditary line of succession.

Lee’s definition of “democracy” is out of step with both the way the founders used the term and the way most political observers use it today. It is an idiosyncratic definition found almost exclusively among American conservatives — in a way that reveals some deeper problems in the modern conservative project.

Some of the earliest contrasts between “democracy” and “republic” in Lee’s sense, according to Cornell historian Lawrence Glickman, came from conservative opponents of the New Deal. At the time, President Roosevelt sold his policies — both domestic and foreign — as a means of defending and enhancing American democracy. Some of his opponents, who saw the president’s redistributive agenda as a kind of incipient authoritarianism, used the “republic versus democracy” distinction as a counter.

“There is no surer way to destroy our government than to champion legislation under the guise of democracy, which piece by piece undermines the checks and balances of our republic,” anti-New Dealer H.W. Prentis Jr. wrote in 1939.

“It goes back to the ‘republic, not a democracy’ chants from the 1964 [Republican] convention,” she tells me. “Conservatives rejected the one-person-one-vote standard of the Warren Court, a set of arguments deeply entangled with their opposition to the Black civil rights movement.”

This is the key move, the moment in which a seemingly innocuous terminological dispute actually takes on real stakes. It reveals how modern conservatism has long had a built-in intellectual justification for ruling without popular support.

The Birch-style “republic, not a democracy” argument allows Republicans to cast moves to expand democratic opportunities and make government responsive to popular support for particular policies — abolishing the Electoral College and filibuster, per Lee’s spokesperson — as examples of the bad kind of “democracy,” of giving too much power to the people and thus enabling oppression. Tools that allow for minority rule, for Republicans to govern even when majorities of voters reject them, are transmuted into features of our good “republic.”

Obviously, there are cases in which counter-majoritarian institutions are good and justified — the First Amendment, for example, protects freedom of speech and religion against majorities that can quite easily turn against them. One of the most difficult questions in political philosophy, endlessly debated in academic journals, is how societies should navigate between the democratic principle that majorities rule and the liberal principle that certain rights may never be permissibly violated.

But the tradition Lee is operating out of goes further than that. It casts doubt on the most basic democratic principle: that the people who win the public’s support should rightly govern. It takes such an extreme position on what should be out of bounds that it can be used to argue that Democrats being able to implement their policy agenda is itself a form of tyranny.

“As early as the late 1980s/early 1990s, Pat Buchanan is spearheading a sharper suspicion of democracy that would become increasingly influential on the right,” Hemmer says. “It comes and goes — obviously, the neocons liked the rhetoric of democracy — but it’s pretty clear that the GOP has come to embrace minoritarian and anti-democratic politics.”

In the context of the 2020 election, the anti-democratic strain embodied by Lee’s rhetoric takes on particularly serious significance.

President Trump has been clear that he believes any Biden win will be fraudulent; he has refused to commit to accepting the results of the election or even agreeing to a peaceful transition of power. The Republican Party as a whole has largely aided and abetted this approach, most notably by insisting on the fiction of massive voter fraud and enacting policies at the state level that make it harder for Democratic-leaning constituencies to vote.

The idea that majority rule is intrinsically oppressive is necessarily an embrace of anti-democracy: an argument that an enlightened few, meaning Republican supporters, should be able to make decisions for the rest of us. If the election is close, and Trump makes a serious play to steal it, Lee’s “we’re not a democracy” argument provides a ready-made justification for tactics that amount to a kind of legal coup.