MILLIONS of self-employed workers hit by the coronavirus shutdown are poised to be offered 80 per cent of their income under an emergency package to be unveiled on Wednesday.

Boris Johnson and his Chancellor will finalise details of the funding plan today as senior Tories warned the Government they had just 48 hours to save Britain’s five million self-employed.

Ex-Tory Business Secretary Greg Clark led calls for the plan to be “comparable” to the job retention scheme for employees, whereby companies who keep their workers will receive 80 per cent of their wage bill.

Rishi Sunak is understood to favour creating a grant scheme adopted by Norway whereby the state pays 80 per cent of average income earned over the previous three years.

This would be calculated on tax returns and banking history but like the job retention scheme, it would be capped at £2,500 per month.

The Treasury was also looking at a similar scheme in Denmark, whereby 75 per cent of income is covered.

To receive The Sun’s Coronavirus newsletter in your inbox every tea time, sign up here. 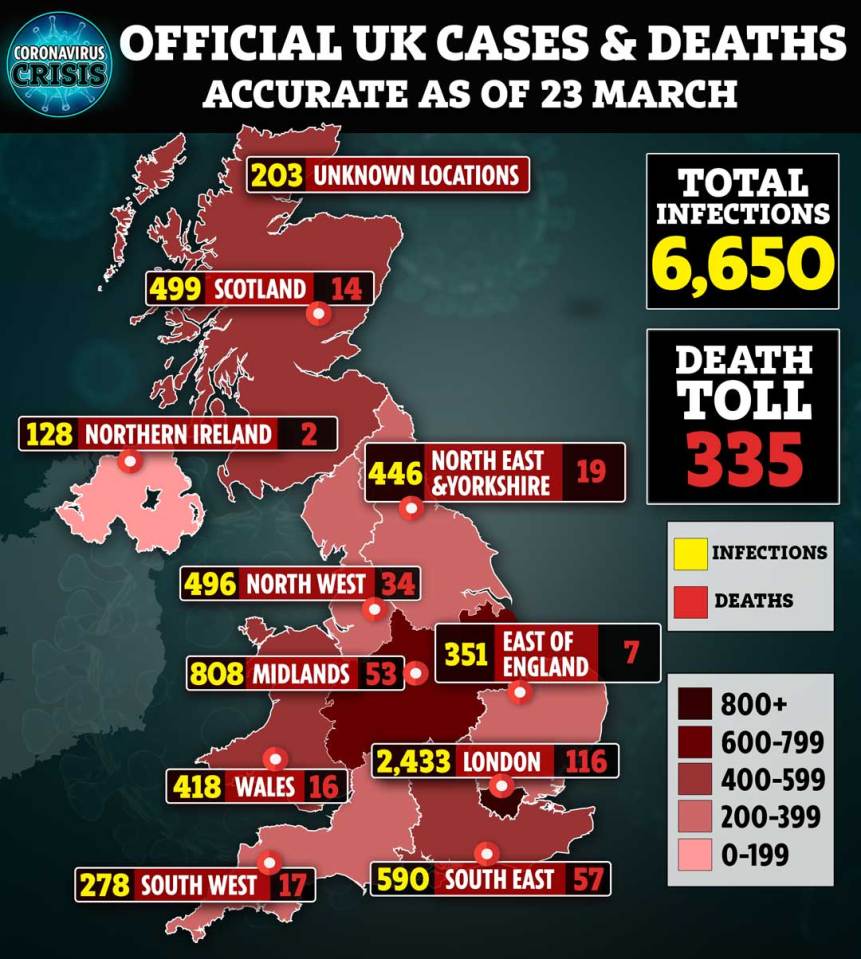 Workers who have only recently become self-employed would have to prove a record of regular income to claim the cash – through receipts and banking history.

Treasury sources defended the delay, saying: “The targeting of it has to be really carefully put together because otherwise there are people who may count themselves and declare themselves as self-employed but are actually getting their income off their dividends of a company.

“So if you don’t do something that is really laser-like targeted then you could end up giving a massive subsidy to some people who don’t actually need it.

“But if there’s a self-employed construction worker whose profit margins are tiny and they have larger costs – for example if they lease out a van over the course of a year – how that costs are covered and how they make sure they don’t have huge outgoings at the same time as not having any work and working that out.”

Processing the claims would create a mountain of admin for the Government.

MPs have suggested the Government employ an army of airline and hotel staff who have effectively been made redundant by the coronavirus pandemic but who have the admin skills needed to rapidly assess claims.

But Treasury insiders said matching the job retention scheme was far more complicated for the self-employed because employees are paid through the pay-as-you-earn tax (PAYE) system, which allows HMRC to know exactly how much an individual earns and is much easier to work out if they are affected by the coronavirus shutdown.

The source said: “Obviously every individual case is very different and working out people’s incomes is just not as straightforward as people on PAYE.”

They said an announcement will not come until tomorrow at the earliest, saying: “We’ve been working at breakneck speed, officials were working over the weekend to draw up policy options for the Chancellor.

“Some companies might not have been profitable last year but were the previous two years so we will have to take into consideration three years’ history.”

But MPs demanded immediate reassurance from the Government that a scheme was on its way, warning that some self-employed workers faced no choice but to carry on working in order to pay the bills and put food on the table.

They warned the lack of action from the Government meant people were continuing to put themselves and others at risk.

One MP said: “Many self-employed workers currently face a choice of feeding their families by continuing to work but risking theirs and other people’s lives, or shutting up shop, staying at home, but being crippled with debt.”

Piling on the pressure to act swiftly, ex-Tory leader Iain Duncan Smith said: “The Government has to seriously look at this right now because the group that has the most difficulty right now is the self-employed.

What did Boris Johnson say during his coronavirus speech today?

Trains, tubes and buses to remain running amid row over services being cut

“The Treasury has 48 hours to give them a lifeline.”

Treasury officials drew up a raft of proposals over the weekend and Mr Sunak was urgently working out which would be the most suitable before making a final decision with the PM tonight.

Treasury sources have distanced themselves from Italy’s model whereby every self-employed worker is given €500 because it would encourage “deadweight”.