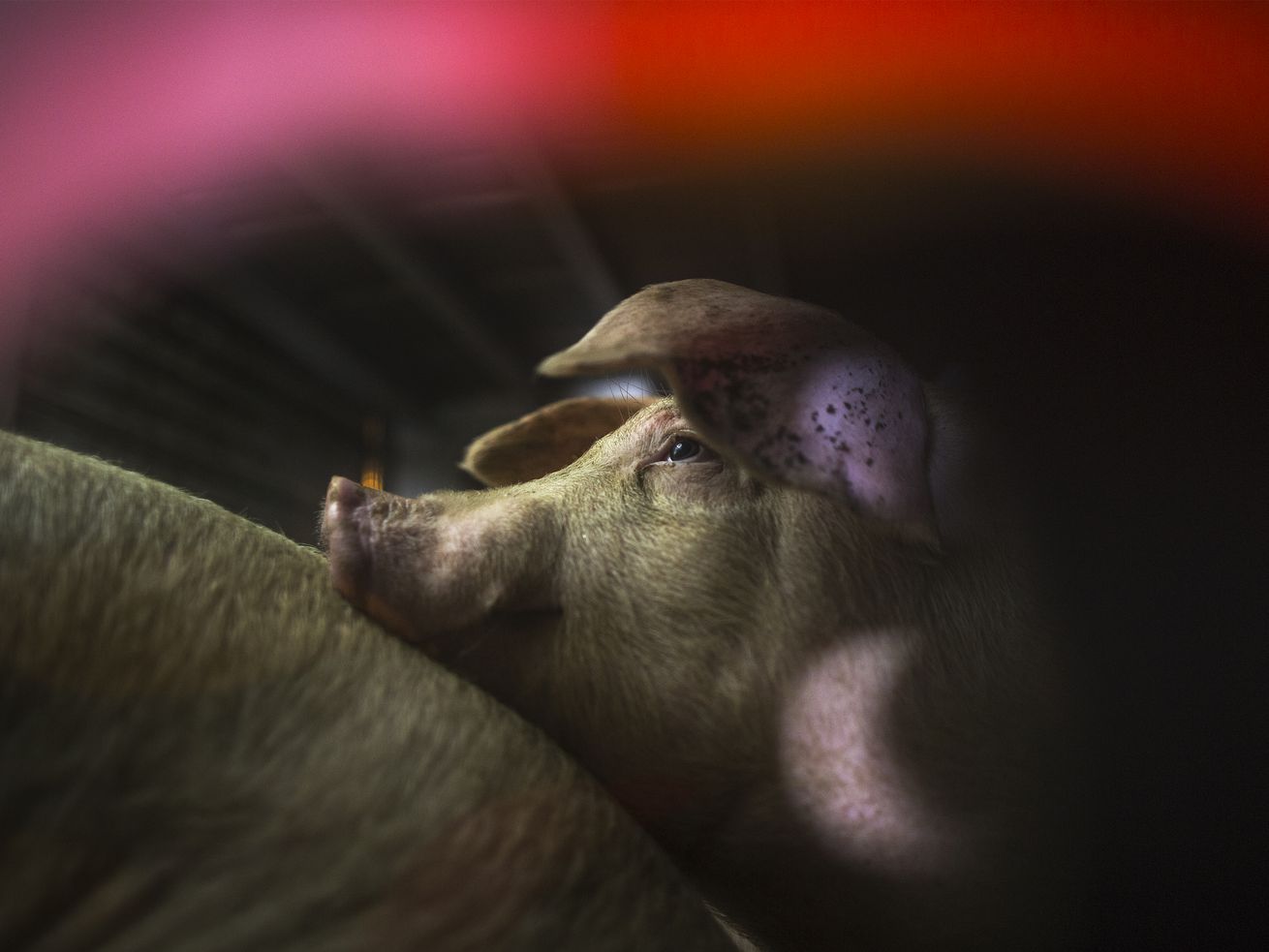 Scientists hooked 32 dead pig brains up to a machine to revive them. And it worked.

Around 15 minutes after a mammal’s brain is cut off from oxygen, the organ is supposed to die.

Without life-giving oxygen, the cells of the brain quickly starve. Some of the cells burst open, while the chemistry of others becomes so imbalanced that their membranes break down. This frenzied spiral ends one way: in death.

It is thought that this process is widespread across brain anatomy and irreversible. After brain cells die, they are thought to be impossible to revive.

But a stunning new finding published Wednesday in the journal Nature turns that conventional wisdom around.

In a paper that reads a bit like an adaptation of Mary Shelley, researchers at Yale describe how they were able to partially revive disembodied pigs’ brains several hours after the pigs’ death.

First, the researchers took 32 pig brains from pigs slaughtered for food and waited four hours. Then, they hooked them up for six hours to a system called BrainEx, which pumped those brains full of oxygen, nutrients, and protective chemicals.

At the end of the 10 hours, the scientists found that the tissue of the pig brains was largely intact, compared to controls. Individual brain cells were up and running, performing their basic duties of taking up oxygen and producing carbon dioxide.

To be clear: The neurons in these brains were not communicating, so there was no consciousness. But the cells were alive — and that alone is a very big discovery.

“Previously, findings have shown that in basically minutes, the cells undergo a process of cell death,” Nenad Sestan, the Yale neuroscientist who led the effort, said during a press conference. “What we’re showing is that the process of cell death is a gradual step-wise process, and some of those processes can be either postponed, preserved, or even reversed.”

The implications are bigger than just basic science research. The ethics of experimenting on partially reanimated brains is uncharted territory.

“My first reaction was holy shit,” says Hank Greely, a Stanford law and ethics professor, who reviewed the findings and co-authored a commentary on the paper in Nature. “The conventional wisdom is brain cells die, irretrievably, after about 10-to-12 minutes without oxygen — and that’s part of the scientific underpinning for the definition of brain death, the definition of death in humans. The idea [that] after four hours with no oxygen, or glucose, or anything else, most of the cells in the pig’s brain would start functioning again? That’s astounding.”

It’s so astounding, he says, that perhaps we should reconsider the definition of death. And we should definitely consider the uncharted ethical implications of partially reviving a dead animal. Because, what if, even for a moment, that pig brain felt something?

Wait, why were researchers doing this in the first place?

So this research is astounding, if a bit creepy. But what’s the point of all of it?

The BrainEx system comes out of the National Institutes of Health’s BRAIN initiative (a.k.a. Brain Research through Advancing Innovative Neurotechnologies). This was President Barack Obama’s “moonshot” project to map the human brain and to create new tools to study it.

BrainEx is one of those tools, developed in consult with the neuroethics working group at the NIH. Andrea Beckel-Mitchener, the team lead of the BRAIN Initiative at the NIH, says BrainEx “is really a tool to study basic biology,” to study the three-dimensional structure of a living brain outside the confines of the body.

In the past, slices of brains and other tissues from dead animals have been shown to be able to be cultured in a petri-dish environment. But never before have scientists had the chance to study those complex relationships with an entire brain.

“A whole cellularly active organ allows you to study the interrelationship between the parts of the brain,” says Nita Farahany, a professor of law and philosophy at Duke, who consulted on the ethics of the study. “You can’t get that with just slices of tissue.”

The scientists hope these whole, preserved, somewhat-alive brains will also be useful for neuroscience research, allowing others to test drugs, and study disease pathways and neuroanatomy. It also raises the far-flung possibility of helping people revive brains damaged due to stroke or other injury. Sestan, the lead researcher on the effort, says he’s not sure if that’s even possible.

But if it is, in the much, much longer term, it could force us to reconsider the definition of death itself.

How the BrainEx system works

Four hours after the pigs were slaughtered in a meat processing plant, researchers hooked the brains up to BrainEx to try to restore and preserve the cellular function of the brains after death. As the researchers stressed many times during a press call, the BrainEx does not have the ability to “reanimate” an entire brain. “That was not the goal,” Sestan says. The goal was to show if individual brain cells can be revived in this manner.

Here’s how it worked. (You might have heard of this process before: Last year, the MIT Technology Review reported on this work while it was still preliminary, and unpublished.)

Four hours after slaughter, the pig brains were attached to the BrainEx device via the carotid arteries. You can think of the device as something like an artificial heart. It pumps a perfusate — a synthetic blood that delivers oxygen and nutrients — throughout the brain via the pig’s own arteries.

The perfusate also contains chemicals that stop the oxidation (i.e. breakdown) of body tissue, that stop apoptosis (i.e. cells bursting after death). It also contains a neural activity blocker, the purpose of which is twofold.

One was to halt excitotoxicity — a process by which neurons become damaged when they are left turned on, creating a chemical imbalance, also leading to cell death. The other was to make sure the brain didn’t “wake up” and regain any level of consciousness. If any consciousness was detected via EEG, the researchers said, they would have shut the experiment down immediately. They were even standing by with anesthesia to administer to the brain in case any widespread neural activity was detected.

After six hours on the BrainEx — 10 hours after slaughter — the researchers didn’t see signs of consciousness in the brains. But they did see signs of life. When hooked up to the BrainEx system, “we see the brains extract oxygen … they use glucose [sugar], and they produce CO2,” Zvonimir Vrselja, a Yale researcher and one of the study co-authors, told reporters.

Which is to say: The cells’ metabolism was turned on. That means they were, to some degree, alive.

Under the microscope, the cells of the BrainEx brains looked relatively normal, while the cells in the control brains, which were hooked up to the BrainEx but not to the sustaining perfusate, looked damaged.

Most compellingly: When the brains were dissected and the neural activity blocker was washed away, the researchers found the neurons retained their ability to communicate with one another. That means the cells retained the function they had when the body was alive.

At the end of the six hours, the brains were taken off the BrainEx. By that point, the control brains were too damaged to continue. But the researchers say there’s no reason why the brains getting the perfusate couldn’t be left on for longer.

What if you could restore consciousness in an animal’s brain?

But it’s more nuanced than that. It’s dead, but it’s also somewhat alive. What Sestan and his team are claiming is they kept the individual cells of the brain alive, hours after the pig was killed. But those cells, for the most part, weren’t talking to one another.

“If consciousness were somehow induced in the brain,” there was no ethics protocol in place, says Steven Lathan, a Yale researcher who served as the team’s bioethicist. “If consciousness was induced by the research, the research would have to stop until we could pull together some kind of ethics and neuro expertise to give guidance to the future conduct of the research.”

But, at the same time, it’s hard to know if EEG is the only indicator of consciousness or perception of any kind. There are billions of neurons in a pig’s brain. How many need to be activated for a pig to “feel” anything — as much as a disembodied pig brain could feel or interpret anything — is not known.

“I think they’re right, that given the lack of an EEG, it would be shocking if there were any consciousness there,” Greely says. “But are there parts of the pig brain that are somehow sensing and reacting to pain? … [I]s that something to worry about? The lack of an EEG is very comforting, but what comes next? Will there always be the lack of an EEG? … My honest answer to the question of ‘does this make the possibility of reanimation thinkable?’ is ‘maybe.’”

Scientists are heading into uncharted territory

All of this is so new. There are some other immediate ethical considerations to think through as the science progresses.

One is: How should scientists think about the ethics of experimenting on partially revived animals?

Technically, this doesn’t fall into the category of animal research “because the brain comes to the researchers already from a dead animal,” from a slaughterhouse, Lathan explains. That means the researchers don’t have to follow the ethical guidelines that come with animal research. Namely, animals should not be subjected to unnecessary harm. But what about partially revived animal brains? There’s no guidance on that.

Here’s another. The researchers also used chemicals to block neural activity in the pigs’ brains to try to ensure they never became conscious. But what if the researchers hadn’t done this? They wouldn’t speculate what would happen then. They don’t know if some consciousness could ever be restored after death, and they say they don’t want to try to restore it.

But some other research group might take their results and try. And there needs to be ethical guidelines in place for that, the ethicists say. “There is, at least, the potential for EEG [i.e. brain activity] to be restored,” Farahany says. “And that means the capacity for pain and distress could be restored as well.”

Greely adds, “We have an obligation not to be cruel to this former pig.”

In the meantime, Greely and Farahany suggest, the research can continue, but scientists need to keep safeguards — like the neural activity blockers and the anesthesia — in place in the case any consciousness is revived.

In a separate commentary in Nature, bioethicists Stuart Youngner and Insoo Hyun warn that the findings could have implications for organ donation. If it’s conceivably possible to keep a brain alive for a period after death, should doctors feel more reluctant to harvest organs for donation?

“If technologies similar to BrainEx are improved and developed for use in humans, people who are declared brain dead (especially those with brain injuries resulting from a lack of oxygen) could become candidates for brain resuscitation rather than organ donation,” Youngner and Hyun write. “Certainly, it could become harder for physicians or family members to be convinced that further medical intervention is futile.”

Again, that’s far off at this point. But these findings implore us to think a bit more deeply on this question: Where is the line between life and death? It’s less clear than it was a day ago. “We had clear lines,” Farahany says. “There was dead, and there was alive. … This calls that into question.”

We need to see the study replicated, Farahany says. And there are a lot of unanswered questions about its potential use in other animals, or perhaps in humans. “But at least it opens up the possibility that what once was lost is possibly recoverable.”