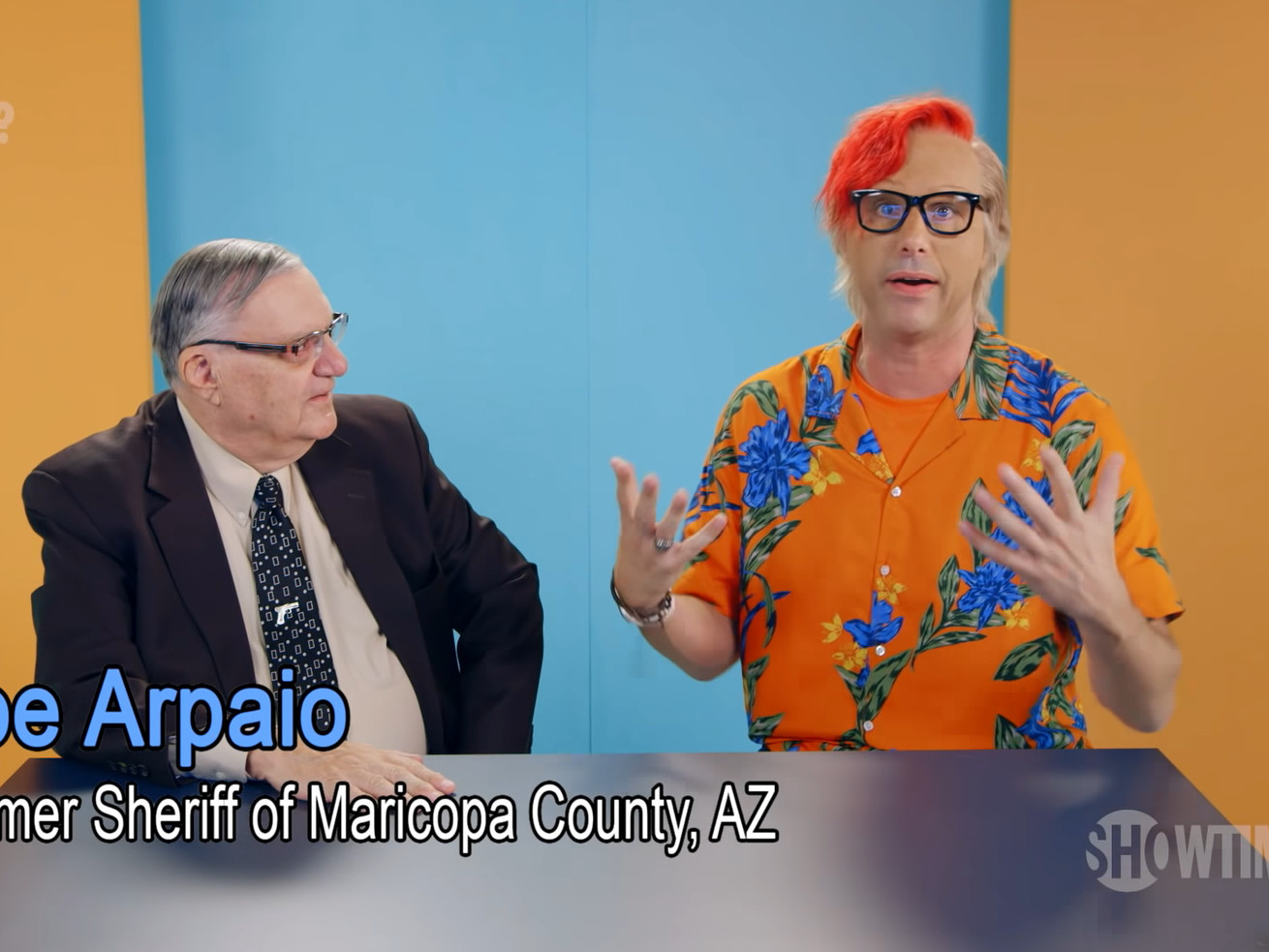 It’s the most disappointing show of the year.

A few weeks ago, a friend asked me if I’d seen the latest installment of Sacha Baron Cohen’s Showtime series, Who Is America. After I said I hadn’t, he asked if I was enjoying the series, and I told him I wasn’t, at least to that point. He didn’t believe me — and his doubt only increased when I admitted I’d liked Cohen’s earlier work, especially Da Ali G Show and Borat.

I struggled to explain myself, as I always do when discussing why I don’t like Who Is America. The show feels oddly formless to me, due to some combination of Cohen’s new roster of characters seeming surprisingly toothless, too many of the show’s segments largely running out of gas, and the fact that the various politicos Cohen and his producers managed to book always feel a little like mini bosses, the monsters you fight right before you’re told the princess is in another castle.

My friend even granted me these points. But, he said, he’d really been enjoying it, before mentioning his latest favorite segment, in which Cohen tricked some yahoos into staging a fake quinceañera meant to “trap” undocumented immigrants. (They ended up being questioned by the cops, for reasons far too complicated to get into here.) He laughed and shook his head. “Sometimes it’s just nice to see these guys take one on the chin, you know?”

In that sense, my friend wasn’t wrong. If you lean left in 2018, the world can feel a little like falling endlessly into a pit, with every bottom you hit proving false. What once felt like inviolable rules of political gravity no longer seem to apply; even using the power of shame to force politicians you disagree with into doing the right thing is often unreliable.

This, I suppose, is Cohen’s secret power. He identifies the few things his targets still might feel theoretical shame over, then zeroes in on them relentlessly.

That shame might stem, largely, from the fear of appearing as anything other than a red-blooded American white guy, but Cohen is really good at puncturing his targets’ self-image; in all the best Who Is America segments, you can watch their eyes slowly fill with regret as the segments go on. Yes, Cohen has a few targets on the left, but he tends to save his biggest guns for those on the right. And after years of the right-leaning folks he targets behaving with absolute impunity, here’s a comedian who’s at least made them look ridiculous. That’s powerful, absolutely.

And yet Who Is America so rarely lives up to its best self, to the degree that the last couple of episodes have felt composed of odds and ends, rather than particularly incisive or even funny comedic bits. The show, just seven episodes long, ran out of gas somewhere in episode four. Why?

Who Is America fundamentally lacks a point of view

Comedy, when it’s funny, can get away with a lot. It can get away with having an incoherent or confused message, with having little in the way of story or character, and sometimes even with being blatantly offensive. If you laugh at the jokes, a comedy has you, even if you leave the experience a bit embarrassed or even angry that you laughed. It’s not rational. It’s physiological.

But I do think all successful comedy has one thing in common: a point of view. By this, I simply mean that successful comedy is filtered through some specific perspective. This is usually the perspective of the comic, or the writer, or the director, but one needs only to think about the oeuvre of Adam Sandler to realize the idea of “point of view” is flexible; the key is that it’s being consistently applied across an individual work. Having that filter in place not only helps the audience look at things in some new way, it also helps them understand why something is funny. Remove the filter and a joke just becomes an observation.

This is where Who Is America falls apart, week after week. Where Da Ali G Show focused on television’s unique ability to enable our worst impulses and Borat was about the underlying horrors of American hospitality, Who Is America sometimes feels like a scattershot riff on reality television that Cohen half-sketched out in 2005 and then forgot about until a few months ago.

I think this is why some of the series’ most successful gags come from the segments’ packaging, rather than the segments themselves. When Cohen’s Alex Jones analog, a character named Billy Wayne Ruddick Jr., PhD, is introduced by a graphic that changes “LIEBRARY” to “TRUTHBRARY,” you instantly get a sense of who this guy is and how Cohen feels about him (if only because he misspells “library”). But the segments featuring Billy Wayne rarely move beyond that basic gag. Billy Wayne is an idiot who doesn’t know anything, and who tries to engage with left-leaning political luminaries and members of the media on his own ridiculous terms.

The result is that it becomes hard to tell whether the joke is meant to be on Billy Wayne — who really does endorse these ridiculous ideas — or on the various suckers Cohen managed to get on the show, who have to listen to him blather. I suspect the answer is the former, given the way Billy Wayne is introduced, but all we have to go on are a bunch of one-joke segments that go on too long, as when Billy Wayne tries to tell Jill Stein that the temperature always fluctuates by pointing out the existence of seasons.

This one-joke limitation exists for most of Cohen’s Who Is America characters. There are six of them in all, and I don’t think I laughed extensively at any of them except one — the NPR shirt-wearing Dr. Nira Cain-N’Degeocello, whom I’ll talk about in a second. Meanwhile, another character, Israeli anti-terrorism expert Erran Morad, convinced enough of Cohen’s targets to do something ridiculous to mark him as another relatively successful character. But the pickings were slim.

The weakness of Cohen’s characters might have been negated by a steady stream of high-profile guests, a sort of “Can you believe that happened?!” who’s who. But the show’s general aesthetic of seeming to have stepped out of 2005 and making only a few minor changes extends even to its treatment of its most familiar targets. It seemed like the show wasn’t even sure why it had Howard Dean talk to Billy Wayne, other than that viewers would recognize the name Howard Dean.

Once again, the packaging steps in to sell many of the gags. The various fake “shows” that Cohen has dreamed up for his characters to “star” in really are a lot of fun in conception. Perhaps a stronger version of the series would have had each episode focus on a single character, following them on their journeys through the racist, gun-loving heart of America. Yet even when Cohen really does seem like he’s zeroing in on racism or gun obsession in an intriguing way, Who Is America too often lets him down by simple virtue of its structure. It can never say anything real because Cohen is always trying to fool his marks.

That wouldn’t necessarily be a problem for a program with a sharper point of view or stronger comedic characters. But I spent far too long in any given episode of Who Is America watching segments that simply went on forever, looking for something to say, then just sort of stopped, before moving on to the next bit.

Which brings me to the one character I felt Cohen used to make some sort of point about America today. As the hippie-out-of-time Dr. Nira Cain-N’Degeocello, Cohen finds a way to make fun of neoliberal anxiety about the state of 2018 America in ways that manage to place the joke both on Cohen’s character and the (mostly) Republicans he interviews.

The joke here has a point of view — about Cain-N’Degeocello’s wish to be as open and tolerant as possible and his anxieties about how to possibly do that. It also offers some incisive commentary about performative misery in lefty white guys. It’s satire of the modern left, sure, but a satire that knows both its target and what it wants to say about that target.

Ultimately, this type of humor accounts for far too little of a show that never quite knows what it is or what it wants to be. When I first reviewed Who Is America, the show made me angry, but after watching almost all of the series (with only the finale unseen), I’m much more dispirited by it. It doesn’t really work, but maybe its goal isn’t to work. I’m not sure it wants to do anything beyond make sure the other guy takes one on the chin.

Who Is America airs Sundays at 10 pm Eastern on Showtime.