The Russian intelligence services “likely are watching the U.S. response to the COVID-19 pandemic,” according to a document obtained by Yahoo.

The intelligence bulletin from April 6 was produced by the Department of Homeland Security Counterintelligence Mission Center.

The document read: “Intelligence collection on medical supply chain vulnerabilities could inform future operations aimed at weakening key logistical elements in preparation for a wartime attack, or opportunistically during an emergency”.

The unclassified report also describes the possibility that Russia will use the current crisis to better their future.

“We expect the Kremlin analyzes American public reaction to disinformation and adjusts techniques to maximize the impact both during the current COVID-19 situation and in the future, such as Russia’s ongoing 2020 election interference”.

The Russian intelligence services “likely are watching the U.S. response to the COVID-19 pandemic”[/caption]

Michael Carpenter, who previously served as a senior Pentagon official responsible for Russia, told Yahoo that the claims do not surprise him.

He told the outlet: “Russian intelligence service is always probing vulnerabilities among adversaries.

“It’s not surprising even in the midst of a pandemic where they are supposed to be focusing on their own safety and health, they’re scrutinizing our supply chain vulnerabilities, our critical  infrastructure vulnerabilities and so forth.

“This pandemic is essentially a war game of countries’ resilience, how command and control works, how governments respond rapidly”.

Daniel Hoffman, a retired CIA senior Intelligence Officer, added: “The Russians are well aware that we know what our vulnerabilities are.

“Implicitly threatening us, the Kremlin wants us to know they also know our vulnerabilities.”

The report arose just days after Attorney General William Barr said that he believes the Russia investigation into Donald Trump’s 2016 campaign was baseless and intended to “sabotage the presidency”.

During an interview with Fox News on Thursday night, Barr said the FBI’s investigation into whether Trump’s campaign colluded with Russia was “one of the greatest travesties in American history.”

Without offering evidence, Barr said the investigation happened “without any basis.”

“They started this investigation of his campaign. And even more concerning, actually, is what happened after the campaign.”

The attorney general continued: “A whole pattern of events while he was president … to sabotage the presidency … or at least have the effect of sabotaging the presidency.”

Most read in US News

Parents shot ‘execution-style’ after kicking out daughter & lover over virus

Jaxon Buell, 5, born with half his brain missing dies in his dad’s arms

Teen, 18, ‘slashed friend’s throat then raped her before inventing suspect’

Trump grills reporter & asks ‘do you work for China?’

The news comes as the US coronavirus death toll reaches 16,267.

However, 24,962 people have recovered from the deadly virus. 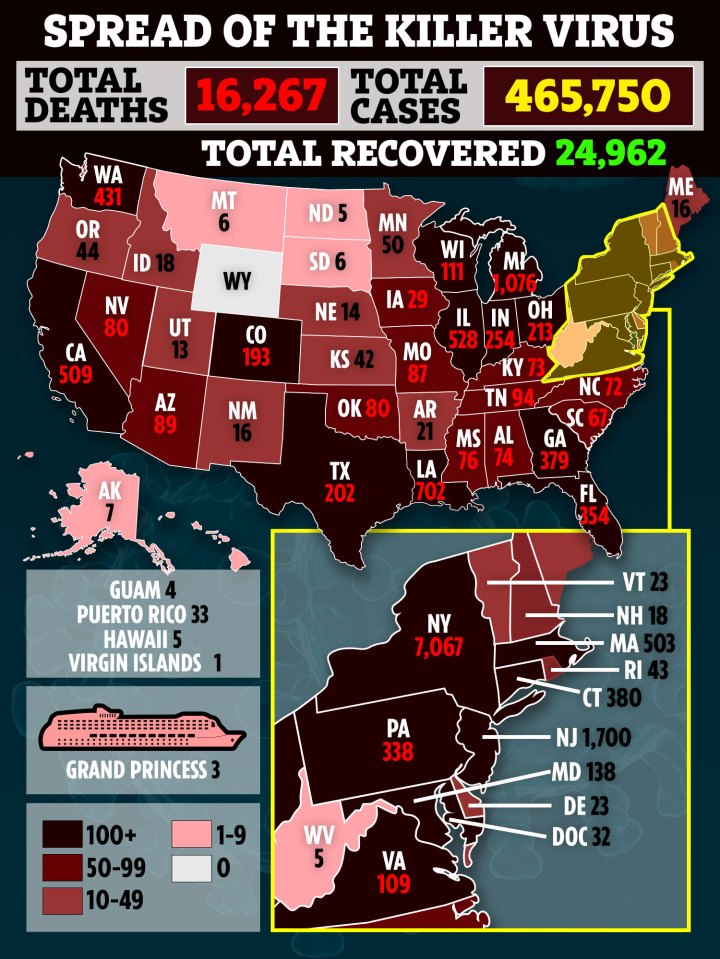