ONE day the Moon could be used like a ‘petrol station’ to fill rockets with fuel for cheaper trips to Mars.

This is according to researchers who think mining Moon ice could be the answer to making spacecrafts lighter and cheaper to launch. 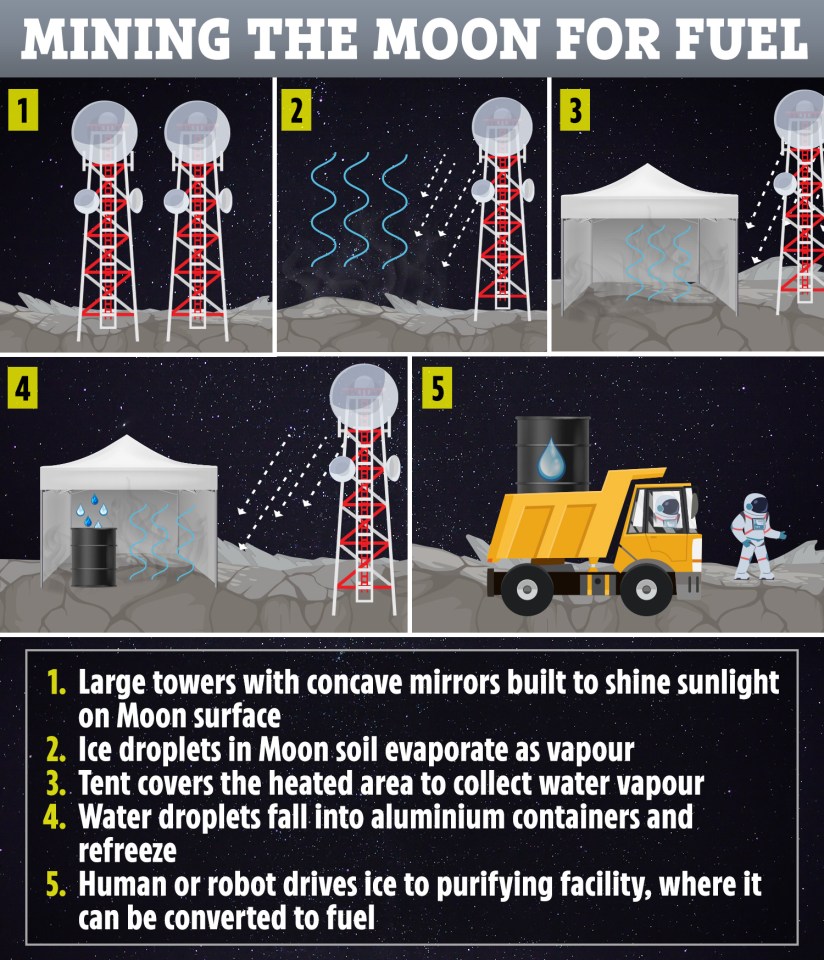 The Moon contains many rare substances and precious metals that space agencies have their eyes on.

However, water, in the form of Moon ice, could be the most useful substance of them all.

This is because water can be split into hydrogen and oxygen and these elements can be used to make rocket fuel.

Turning Moon ice into fuel could mean lift offs from Earth could be cheaper and less risky than heavy ones as a smaller amount of initial fuel would be required.

This could make travel to Mars and other regions past the Moon more efficient.

Nasa has previously estimated that there’s 600 million metric tons of lunar ice, although other agencies have estimated higher amounts.

However, lunar water isn’t actually that easy to access and researchers are still trying to work out how it could be done.

Water on the Moon is said to be like tiny grains of ice heavily mixed into the soil.

One theory of how to extract it comes from George Sowers, an engineer at the Colorado School of Mines in the US.

As part of the Artemis missions, Nasa will build a ‘lander’ to take two astronauts to and from the Moon (artist’s impression)[/caption]

In a research paper he proposed an extraction method that would require large towers with concave mirrors attached.

These mirrors would shine sunlight onto the soil to heat it.

The ice in the soil would then evaporate as vapour and be collected by tents setup over the heated area.

It would then condense into water and fall into aluminum containers.

Then the water would freeze.

Either a human astronaut or a robot could then take the water to a purifying facility so it could be converted into rocket fuel.

Other similar methods have been suggested by different reseachers.

However, there is still a long way to go before a method like this is perfected.

The purification process would have to be spot on, otherwise the fuel could be unusable or even explosive.

All the machinery would also have to withstand radiation and the extremely cold temparautres.

Moon ice tends to be found in craters and darker parts of the Moon, including poles.

Having astronauts work in these regions for long periods of time would come with its own issues.

Despite this, space agencies from all over the world are hoping to set up Moon bases and look into Moon mining in the near future.

Nasa has even proposed setting us neutral “safety zones’ between Moon bases to avoid conflict between companies and countries.

Here’s everything we know so far…

Most read in Science


Sun goes into period of ‘lockdown’ which could cause quakes, cold weather & famine

In other space news, Nasa is sending astronauts to the ISS on Elon Musk’s spaceship for the fist time next week.

A tropical storm has grounded a key SpaceX launch twice since Sunday.

And, incredible photos of eerie Martian landscapes have been released online by scientists.

Do you think humans should colonise Mars? Let us know in the comments…

We pay for your stories! Do you have a story for The Sun Online Tech & Science team? Email us at tech@the-sun.co.uk