NENE Leakes has been slammed for mentioning her boutique in a post about looting after George Floyd’s death.

The Real Housewives Of Atlanta star shared a snap of police cars outside a shopping mall and said it’s where Swagg Boutique is.

Nene wrote on Instagram: “This is happening right NOW at the mall where my boutique is located but what i do know is that your exhausted, upset and feel like you haven’t been heard!

“I feel ya! Let’s move in love, peace and support! Let’s try an understand better, let’s think about the future and do what’s right! I love us!

One follower asked: “Why is that the first thing you mentioned if it’s not about your boutique?” alongside a crying face. 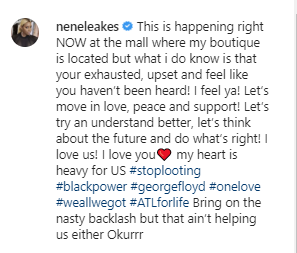 Another added: “You just don’t want your business burned down

A third posted: “The celebrities in ATL just worried about their businesses. Which boils down to $$$.”

Yet another user claimed: “Lol it’s definitely about your boutique, y’all stay in your gated communities and want to tell people that are oppressed how to react.”

Nene urged protesters not to “burn down our city”[/caption]

Nene shared another post about the rioting and said: “The enemy wants us to burn down our neighborhoods! Don’t fall for it!”

The Bravo star added: “DONT turn down the energy either….TRANSFORM IT!”

The death of George Floyd, 46, in Minneapolis has sparked protests, looting and burning of buildings across America.

Most Read in TV


Ruth Langsford breaks down in tears after winning £33K for charity


Where are the other Emmerdale Robert Sugdens now?


Where is The Repair Shop filmed and who pays for the repairs?

Public outrage was sparked after video emerged of white Minneapolis cop Derek Chauvin kneeling for several minutes on the neck of George, a black man.

Floyd, who was handcuffed and lying face-down on the ground, could be heard saying “I can’t breathe” multiple times in the video.

Nene’s RHOA co-star Porsha Williams was among the thousands taking to the streets to protest against police brutality.

She joins the likes of Oprah Winfrey, Beyonce, Rihanna and Kim Kardashian in speaking out after George’s death.