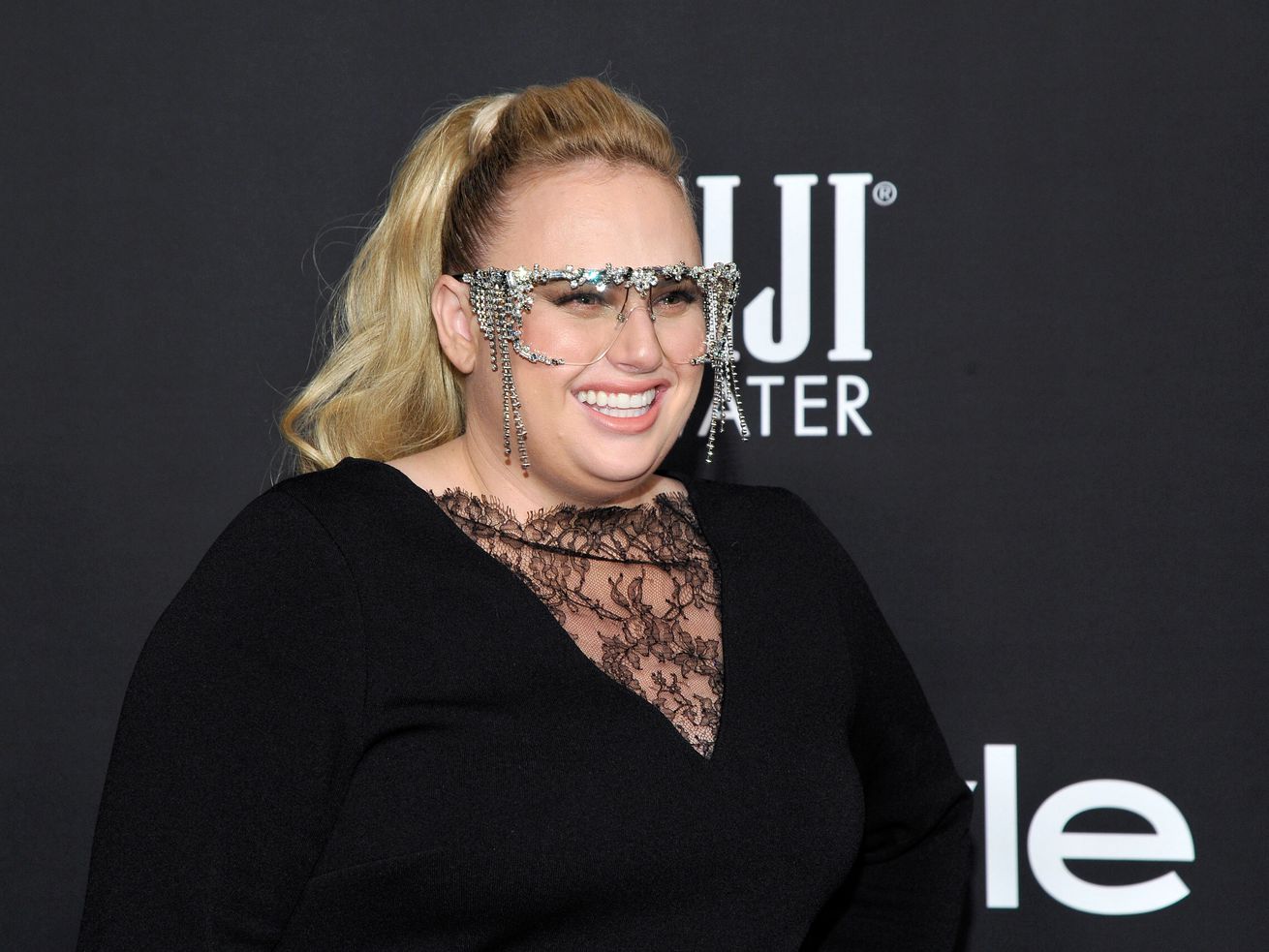 Ricki Lake, Queen Latifah, and Mo’Nique have all starred in love stories.

Rebel Wilson is learning the hard way that, more often than not, swallowing one’s pride and apologizing is the best way to handle a mistake. After days of outcry following her claim last week on The Ellen DeGeneres Show that she was “the first-ever plus-sized girl to be the star of a romantic comedy,” referring to the forthcoming movie Isn’t It Romantic, the actress admitted on Monday that she was wrong.

In a couple of well-intentioned moments, hoping to lift my fellow plus sized women up, I neglected to show the proper respect to those who climbed this mountain before me like Mo’Nique, Queen Latifah, Melissa McCarthy, Ricki Lake and likely many others.

Wilson’s apology comes after fans and film critics alike pointed out that she failed to recognize the work of actresses like Ricki Lake, Queen Latifah, and Mo’Nique when she claimed to be the first plus-size romantic lead.

Rather than immediately admit her misstep, though, Wilson suggested that those actresses didn’t really count as plus-size leads and proceeded to block critics, many of them African American, who called her out on Twitter. She’s since unblocked at least some of those critics.

Hey girl! Yeah I of course know of these movies but it was questionable as to whether: 1. Technically those actresses were plus size when filming those movies or 2. Technically those films are catorgorized/billed as a studio rom-com with a sole lead. So there’s a slight grey area

Before her apology, Wilson was specifically taken to task for erasing how inclusive black films have been of women of all body types. Given the entertainment industry’s history of marginalizing and underpaying black actresses and the dearth of black film critics covering the industry, the actress’s initial dismissal of black Hollywood’s contributions to size inclusion sparked outrage.

Isn’t it Romantic, which stars Rebel Wilson and Liam Hemsworth and will be released on Valentine’s Day, has been billed as a “game changer” for the body positivity moment. (The trailer for the film is out, and Wilson has discussed the plot while promoting it.)

In the film, Wilson plays a woman named Natalie who hates rom-coms because they typically star lithe Julia Roberts types, not larger women like herself. But when Natalie hits her head, she finds herself living in a rom-com, complete with a handsome suitor (Hemsworth) who falls in love with her at first sight.

ABC’s Good Morning America program predicted the PG-13 film could be a “body confidence game changer,” especially for teens. The morning show also compared the film to Crazy Rich Asians to suggest that it could do for body diversity what CRA did for ethnic diversity on the silver screen.

The film’s premise, however, sounds problematic, since something extraordinary has to happen (head trauma) for Natalie to attract a desirable mate — and this mate, rather than Natalie herself, is the one who helps her change her view of herself.

There’s nothing radical about a woman choosing to love herself after a man does it first. But during an era when diversity has become a selling point, be it body or ethnic diversity, it’s easy to see why Isn’t it Romantic has been marketed as a “game changer.”

Yet the film really isn’t. Movies like the Amy Schumer vehicle I Feel Pretty, though not a rom-com, explored body image as recently as this spring. And Netflix’s Sierra Burgess Is a Loser, which debuted in September, chronicled the romantic experiences of an “average-looking” teen girl.

Isn’t it Romantic may not actually be a game changer, but it’s this characterization of the film that likely led to the backlash against Wilson’s comments. Eager to play the role of pioneer, Wilson left out the plus-size actresses, many of them women of color, who’ve already played romantic leads in films that didn’t rely on a fantastical premise to set the plot into motion.

When Wilson questioned in a tweet whether actresses like Queen Latifah and Mo’Nique were really “plus-size when filming,” it plausibly stemmed from her desire to frame her new rom-com as groundbreaking. But in doing so, she inadvertently drew attention to how little credit black women get for their work in the entertainment industry and beyond.

It’s also worth noting that a plus-size America Ferrera starred in 2002’s Real Women Have Curves. The film focused not only on her character’s relationship with her mother and their work in a Los Angeles garment factory but on her romance with a boy from a completely different class and ethnic background.

Women of color have, for years, been depicted in film in a variety of sizes and shapes. They’ve played friends, family members, co-workers, and, at times, love interests.

To avoid the outcry that’s now dominating press about her rom-com, all Wilson had to do was acknowledge that fact. When she launched her plus-size clothing line Rebel Wilson x Angels last year, for example, she did not market it as the first plus-size clothing brand, because that would have been absurd. Instead, she straightforwardly discussed why there was a need for a clothing line in sizes 14 to 24.

”Obviously I just feel like plus-size fashion is underserved and, since the average size of an American women is 16 to 18, why aren’t there more brands, more options?” Wilson said at the launch party for her line. “Style shouldn’t just stop at size 2 or 4.”

She could have made a similar statement about her new movie, not marketing it as the first such film but highlighting why it’s important to have women of all body types playing love interests. While doing so, she could have highlighted the actresses who got there before she did.

There’s a reason body diversity is more prevalent in films starring people of color, and it’s not all positive. Since Hollywood’s Golden Age, larger black women have appeared in cinema because of racial stereotypes that pigeonholed women of color as either “mammies” or “jezebels.”

Think of this dichotomy as a racialized version of the madonna/whore stereotype. While jezebels were rooted in hypersexual stereotypes about black women, the “mammy” stereotype framed black women as heavyset, asexual caretakers of white families.

Actress Hattie McDaniel, the first black woman to receive an Academy Award, won the Oscar for her role as “Mammy” in Gone With the Wind. She would go on to play a maid more than 70 times, as the character was one of the most common film representations of African-American women.

In the 21st century, the trope hasn’t completely died out. Actress Octavia Spencer has discussed how often she’s asked to play caretaker roles and even won an Oscar for playing such a character in 2011’s The Help.

Today, though, audiences also see films with plus-size black women as romantic leads; it’s not considered earth-shattering, for instance, to see Queen Latifah paired up with Common in a film.

But this isn’t to say that fatphobia is not an issue in the black community. It’s a problem in pretty much every community, and many of the black films starring larger actresses as leads address it. Mo’Nique has commented on both her feelings about skinny women and her efforts to lose weight in her writing, comedy acts, and on social media. And she was one of the black actresses who directly tweeted at Wilson for falsely claiming that playing a love interest made her a plus-size pioneer.

Hey my sweet sister. Let’s please not allow this business to erase our talent with giving grey areas and technicalities. Take a moment and know the history. DON’T BE A PART OF ERASING IT. I wish you the best.

“Take a moment and know the history,” the comedian tweeted at Wilson. “DON’T BE A PART OF ERASING IT. I wish you the best.”

Mo’Nique’s words speak for many of Wilson’s critics. Beyond asking that she apologize for her mistake, they want Wilson to acknowledge how size inclusion in Hollywood largely started with African Americans.