The nation has come out in droves to support the inspirational World War Two veteran as he celebrates the landmark birthday.

The Queen and top military brass promoted Tom from captain to colonel as part of his birthday celebrations.

Piers Morgan lead the way for the celebrity thanks, sharing a photo of the Colonel with the caption: “Happy 100th Birthday COLONEL Tom! Promoted by the Queen to mark this very special day. Wonderful!”

Colonel Tom was invited onto Good Morning Britain, where Piers paid tribute to the hero: “Tom, you are a remarkable man. We’ve only known you three weeks but it feels like we’ve known you forever.

“But as the whole country has been going through such misery, hardship and loss, you’ve been like this shining beacon of hope and inspiration.

“You’ve made us feel so much better.” 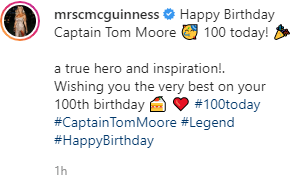 Simon Cowell filmed a special video for Tom, which was aired on Good Morning Britain.

He said: “Hello Captain Tom, this is Simon Cowell. I hear it’s your 100th birthday and I want to say that in itself is remarkable.

“Happy birthday. But I also want to congratulate you on everything else you are doing for the country at the moment.

“You are a total inspiration. I was going to say you’re a national hero, I think you’re a world hero.”

Simon continued: “Keep doing this, please, for the next 100 years. Sending you all my love. Have the most amazing day.”

Michael Ball – who bagged the UK number one alongside Colonel Tom – also said his thanks and sang happy birthday: “He is the epitome of that generation and the epitome of the great in Great Britain.”

Holly Willoughby wrote a tribute in anticipation of Tom appearing on her show This Morning: “Happy 100th Birthday to Colonel Tom Moore… sending you huge amounts of love… See you all on @thismorning at 10am”

a true hero and inspiration!. Wishing you the very best on your 100th birthday

Colonel Tom Moore sent his own message to the nation on Good Morning Britain – where he thanked the nation for their support.

MOST READ IN TV AND SHOWBIZ


Inside Ed Sheeran’s £3.7m Suffolk estate where he’s in lockdown with Cherry

He said: “Thank you very bloody much. It just shows what a magnificent country we are. No matter how difficult it may be, we know we will win through.”

As well as the celebrities, Prime Minister Boris Johnson called him a “point of light in our lives” in a special happy birthday video message and Captain Tom congratulated him on the birth of his son.

He has received more than 150,000 birthday cards from well-wishers around the world.