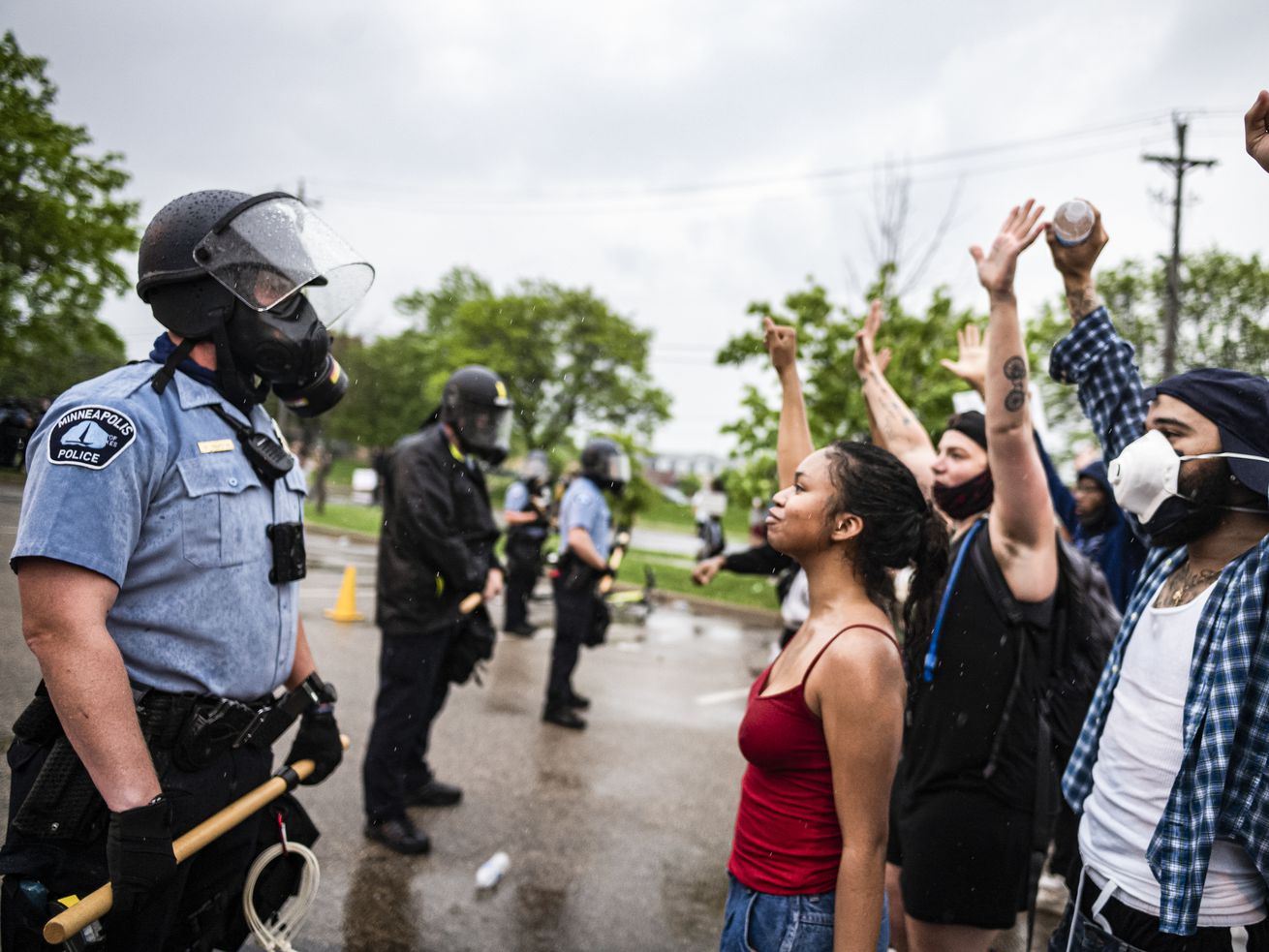 A community-wide protest in Minneapolis, Minnesota, was held May 26 after the death of George Floyd. | Richard Tsong-Taatarii/Star Tribune via Getty Images

In Minneapolis, police responded to a protest about police violence with more violence.

In Minneapolis on Tuesday, thousands of people gathered to condemn the police violence against George Floyd, a 46-year-old black man who died Monday after an officer knelt on his neck for more than seven minutes. The protest, which included chants of “It could have been me,” was met at times with tear gas and rubber bullets. It’s a response that was incredibly harsh — and one that marks a stark contrast with how law enforcement has reacted to lockdown protests, several of which have included armed white men.

Tuesday’s protest was prompted by officers’ violence toward Floyd, actions that were captured on camera by bystanders who urged the police to stop hurting him. Floyd was arrested in connection with a forgery report on Monday; shortly after, officers pinned him to the ground, with one putting his knee on his neck to keep him down.

In a video that circulated widely on social media, Floyd can be heard repeatedly saying, “I can’t breathe! I can’t breathe!” a statement reminiscent of the last words of Eric Garner, who died in New York in 2014 after a police officer put him in a chokehold. Following his transport to a medical center, Floyd died later in the day.

Floyd’s death has spurred massive outcry over the police’s excessive use of force during his arrest and the long pattern of police violence that’s resulted in the killing of black men. In Minnesota alone, there have been multiple incidents in recent years that have raised national attention, including the shooting of Philando Castile, who was killed by a police officer during a traffic stop in 2016.

Unlike many officer-involved shootings, though, there have been some swift repercussions to Floyd’s death: The four police officers who were involved in the incident were fired, and the FBI has now opened an investigation. “Being black in America should not be a death sentence,” Minneapolis Mayor Jacob Frey said in a statement. Floyd’s family is now calling for the officers to be charged with murder, a sentiment that’s been echoed by advocates around the country.

Yet despite the steps taken toward justice, the treatment of protesters during a Tuesday march in Minneapolis underscored how police continue to use violence against people of color.

Although the march was predominantly peaceful, at one point a group of protesters began to throw rocks and vandalize police cars, according to CBS Minnesota. When protesters approached the location of the precinct where the officers who hurt Floyd supposedly worked, some broke a window of the police station, while others tagged the outside of a car with graffiti. Around that time, police began firing tear gas at the crowd and using flash grenades, CNN reports. Andy Maddix, a Star-Tribune journalist who was on the scene, also noted that he was shot by a rubber bullet.

The escalation from police is an example of how open law enforcement can be to using violence against a crowd composed heavily of people of color. “This is where police have to become better at deescalating,” Rashad Robinson, the president of advocacy group Color of Change, told Vox. “It illustrates very clearly the ways controlling, harming, and mistreating black people are an acceptable course for police in America.”

Images from these protests — including protesters dousing their faces with milk in order to temper the sting of the tear gas — underscore not only the intensity of the response, but a major contrast with the lack of force that’s been used in anti-lockdown protests at state capitols around the country, when the protesters were armed white men. As Vox’s Katelyn Burns reported, white men equipped with assault weapons were among those who protested Gov. Gretchen Whitmer’s lockdown restrictions in Michigan in late April, prompting some lawmakers to wear bulletproof vests to work. In St. Paul, too, an overwhelmingly white crowd pushed to “liberate Minnesota” earlier this month, with some showcasing firearms.

“Unarmed people, many of whom are people of color, protest police brutality and are met with police brutality — flash grenades, tear gas, and rubber bullets,” says Georgetown Law professor Paul Butler, the author of Chokehold: Policing Black Men. “But when armed, mainly white protesters storm the Michigan state capitol, the police just let them be.”

There’s a major difference in how unarmed black protesters were treated in Minneapolis, compared to armed white protesters

The protests that took place in Minneapolis over Floyd’s death and those that have occurred in state capitols have many differences — including, in some cases, their size. Still, the contrast in how police reacted to protesters at these respective gatherings was evident, and several journalists and activists have called out the disparity on social media.

the stark — and sickening— differences in police response to the George Floyd protests vs. armed anti-lockdown protests // via @therecount pic.twitter.com/HqcwD8nPZy

Meanwhile, armed protesters in Michigan were met simply with pointed stares from the officers on the scene during a lockdown protest that itself drew attention to the racial disparities exacerbated by the coronavirus pandemic. “Armed men with guns have been showing up in capitols across the country, in essence, demanding that things open back up,” Robinson notes. “What’s been opening back up are places where black and brown people work.”

As advocates note, this is not to say that there should have been more force used in the protests at the state capitols, or in any protests, but to highlight the uneven response — and note that police shouldn’t be disproportionately using violence when these protests involve people of color.

Ultimately, both Robinson and Brown say that Floyd’s death — and the treatment of the protesters who were trying to raise awareness about it — draws attention to the lack of accountability of police in many cities.

Robinson notes that more policies focused on transparency and taking responsibility, coupled with a fundamental rethinking of why the criminal justice system is so central to American life, need to be implemented in order to advance long-term change. “We put everything in our police departments instead of investing in communities to make them home. Literally, we put our knee on people’s necks instead of lifting them up,” he said.