A NEW York City landlord has said that 80 percent of retail tenants skipped their April and May rent payments amid the coronavirus pandemic.

Residents are also leaving their apartments and breaking leases during the crisis – with most young people returning to their parents’ houses.

The city has been under lockdown for two months[/caption]

During an earning call with Vornado Realty Trust, one of the city’s biggest commercial landlords, Chief Executive Steven Roth said that roughly 80 percent of its retail tenants did not pay rent at the beginning of April and May, the New York Times reported.

However, among the company’s office tenants, roughly 60 percent were able to pay their rent, Roth confirmed.

And by the end of April, 90 percent of its office rent had been paid. 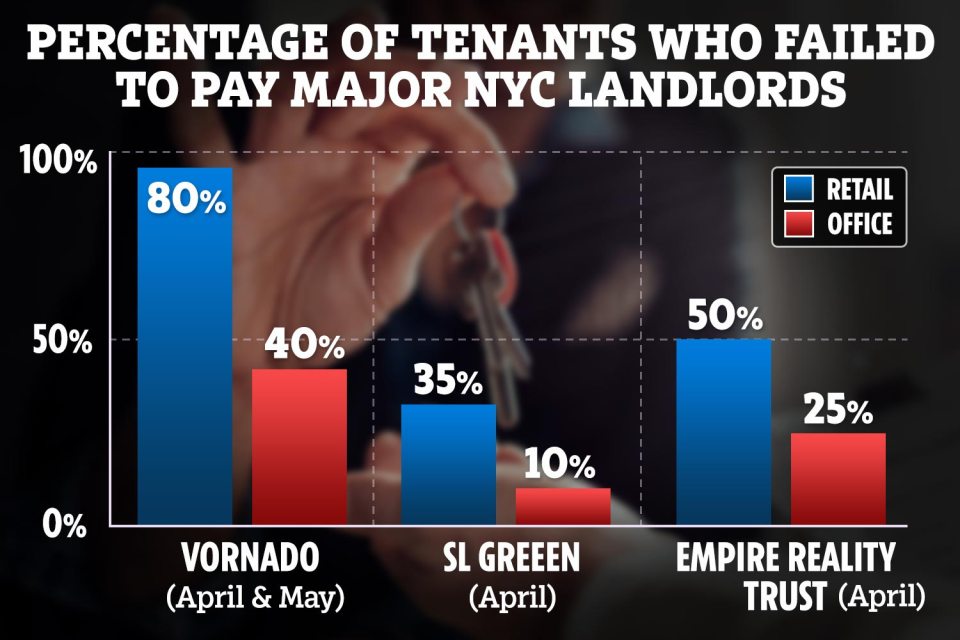 The decisions made by both residents and businesses can cause a knock-on effect for landlords, who will struggle to pay their tax bills on July 1.

This will result in an overall loss of tax revenues for the city and the state.

In April, the Empire State collected $78.5million in tax revenue on the sale of commercial and residential properties.

However, just one month prior the state collected $217.5million, according to a report by the Real Estate Board of New York, or REBNY, a trade group.

The city has turned into a ghost town[/caption]

“This dramatic loss in tax revenue is alarming,” said REBNY president James Whelan in a statement.

“The real estate sector is the city’s economic engine.

“The pandemic has caused that engine to stall and we should expect such alarming trends to carry through May and June in the best-case scenario.”

Jay Martin, Executive Director for the Community Housing Improvement Project, told Real Estate Weekly: “There are hundreds of buildings in New York City operating at a loss because of COVID-19, and many of them will not be able to survive another month without help.

New Yorkers have been protesting for rent cancelations[/caption]

“If officials do not immediately target relief to lower-income renters and small owners who have mounting monthly expenses, they will not be able to reverse the damage this crisis will have on our city.”

He continued: “Unless the federal government steps in to help renters and owners in a big way, we are going to see a housing disaster the likes of which we have never seen.

“Congress must provide financial aid directly to renters and the state must match that with property tax relief for owners or in weeks, not months, we will see buildings going under.”

The Times reported that only 1,660 residential properties were sold in April – which is half of the sales from this time last year.

Most read in US News

Hand sanitizer can burn through car DOOR if left in sunlight, firefighters warn

However, sales are expected to remain stagnant as real estate brokers are not allowed to show homes in person to potential buyers until the coronavirus lockdown is over.

Many New Yorkers have been protesting rent payments during the coronavirus pandemic.
On Friday, protesters from Housing Justice for All in New York showed up to Governor Andrew Cuomo’s Albany mansion and posted a banner on his fence that read “Cancel Rent,” Refinery29 reported.