NEW Bond flick No Time To Die has become the most expensive yet — at £200million.

The huge bill is revealed in accounts newly released by its production firm, B25.

Besides the lavish locations and set-pieces, the film has been dogged by problems.

Director Danny Boyle quit over the script in 2018 and was replaced by American Cary Fukunaga.

Filming was delayed by four more months when star Craig, 52, hurt his ankle on the set.

And when the Covid-19 pandemic shut cinemas, its release was switched from April to November.

Filming wrapped last October and by the end of December, B25 had spent £199.5million.

The cost would have been £47million more but for a tax scheme aimed at encouraging filmmaking at UK-based studios.

No Time To Die’s budget is 250 times that of the first Bond, Dr No, starring Sean Connery in 1962[/caption]


Kate Garraway thanks fans for ‘comforting’ messages about husband Derek

HOLMES IS WHERE THE HEART IS

Craig has said the film will tie up loose ends from his time as Bond, which began in 2006.

He said: “This movie is about reconnecting him to Casino Royale really, and that’s what we’ve managed to do.” 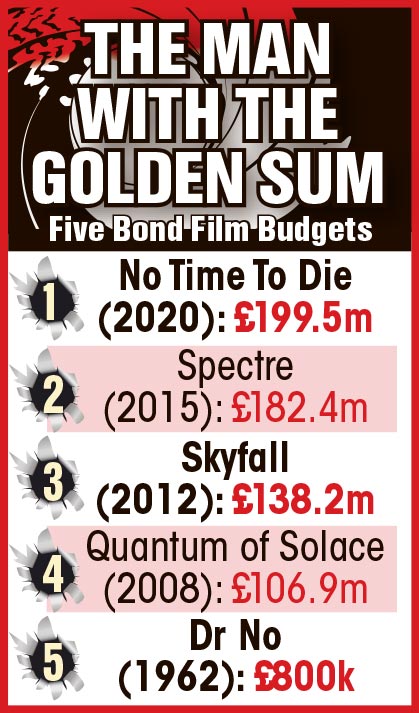