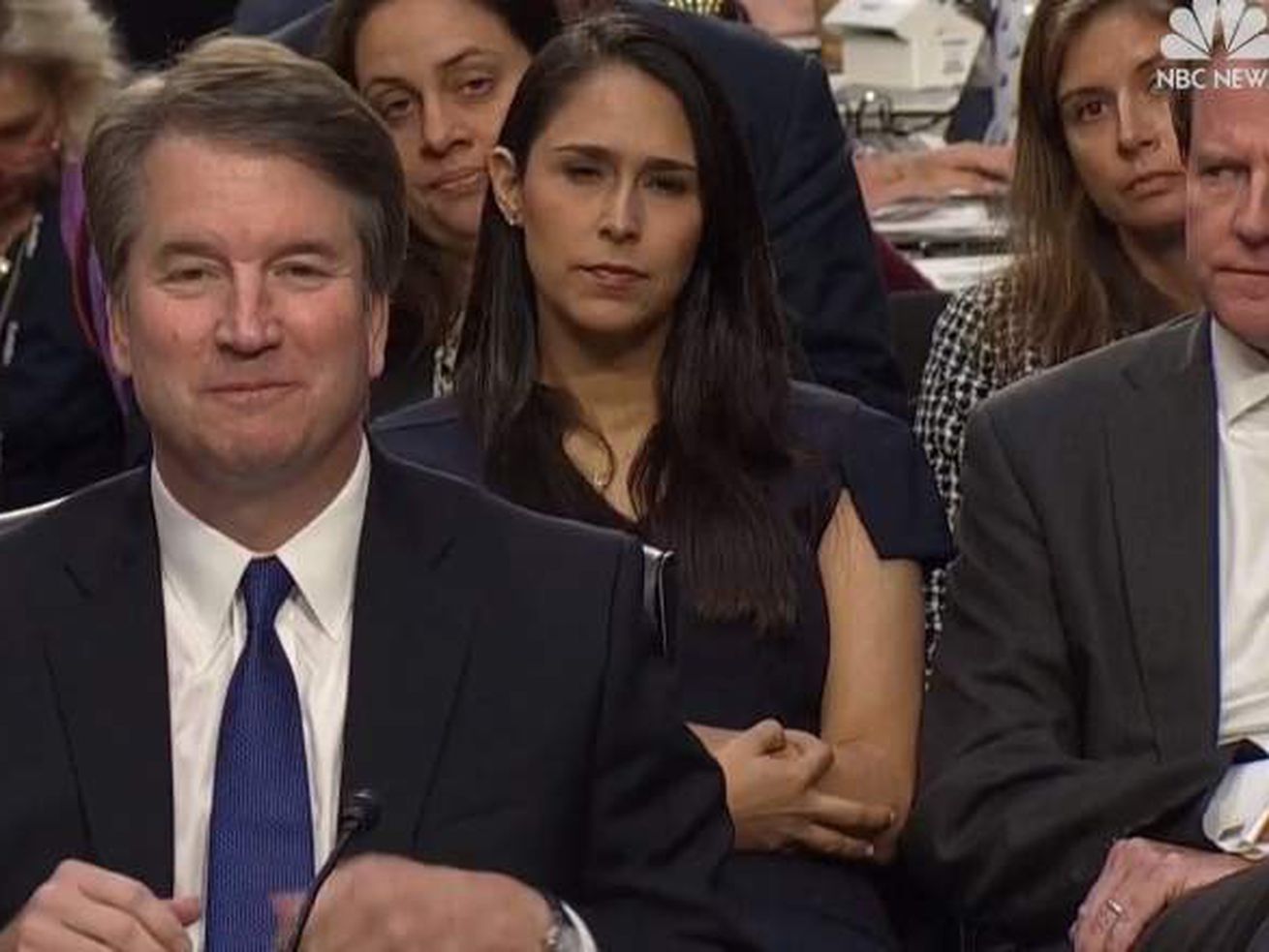 Look at the above image. On the left, of course, is Supreme Court nominee Brett Kavanaugh, at the Senate Judiciary Committee for his confirmation hearings. Behind him is his former clerk, longtime Republican legal operative Zina Bash. But what is Bash doing with her hand? Is she resting it normally? Is she making an “okay” sign? Or could it be that she’s making a … WHITE POWER HAND SIGNAL?

This is 2018, and so naturally, some prominent #resistance Twitter personalities jumped on the latter allegation, seeing Bash’s hand movements as proof of Republican complicity with white supremacist movements:

Kavanaugh’s former law clerk Zina Bash is flashing a white power sign behind him during his Senate confirmation hearing. They literally want to bring white supremacy to the Supreme Court. What a national outrage and a disgrace to the rule of law. pic.twitter.com/uQGOpNa6xg

Eugene Gu, a prominent anti-Trump doctor who recently made news when he was accused of sexual assault, racked up more than 13,000 retweets and 17,500 likes for his tweet accusing Bash.

Keith Rubin, an Army veteran whose Twitter bio states he “love[s] everything except racism,” got even more engagement on his version of the post:

Who is she? What’s up with the white power sign? @MSNBC pic.twitter.com/VUU9QsFdXW

In a since-deleted tweet, Amy Siskind, the prominent Twitter personality who writes a weekly list of #NotNormal things the Trump administration has done, stated that the hand signal should disqualify Kavanaugh from the Supreme Court.

Before we go any further: Bash was not making a “white power hand signal.” You can, if you want, trust the word of her husband, John Bash, who is currently US attorney for the Western District of Texas:

Zina is Mexican on her mother’s side and Jewish on her father’s side. She was born in Mexico. Her grandparents were Holocaust survivors. We of course have nothing to do with hate groups, which aim to terrorize and demean other people — never have and never would. 2/3

But if his word isn’t enough, you can listen to real experts on white supremacist movements.

“No one should assume anything about the use of such a gesture unless there are other unmistakable white supremacist signifiers in that context as well,” Mark Pitcavage, an expert on right-wing extremism at the Anti-Defamation League, tweeted, adding:

Out of all the things you should be legitimately concerned about regarding the Senate confirmation hearings in Washington, DC, today for Judge Kavanaugh & SCOTUS, handshakes and handsigns ought not be among them.

Jared Holt, a research associate at the left-leaning watchdog group Right Wing Watch, agrees. “It could have just been her resting her hand in a way that looked like that,” he said. “I haven’t seen anything that would lead me to believe this was intentionally a troll.”

That’s the gist of it. But there’s a backstory to why the okay gesture is perceived as a hate sign, and the eagerness of some liberals to embrace fake news on the subject is itself revealing. We have, at this point, gotten plenty of signs through actual policy decisions, and concrete connections between Trump staffers and white nationalist activists, that the Trump White House is pursuing a racist agenda. So why do people still want a secret hand signal to prove that the Trump administration is sympathetic to white supremacist goals?

The origins of the okay hand signal troll

As the ADL’s Pitcavage explained last year, this whole story was fueled, like so much internet nonsense before it, with a 4chan trolling effort.

In February 2017, Pitcavage writes, a 4chan user proposed an effort called “Operation O-KKK” in which he and allies would, in the anonymous user’s words, “flood Twitter and other social media websites … claiming that the OK hand sign is a symbol of white supremacy.” Here’s the original 4chan post, as shared by KnowYourMeme:

The choice of the okay symbol for the prank, as KnowYourMeme editor-in-chief Brad Kim explains, was not totally arbitrary; “Sometime during the 2016 United States presidential election,” Kim writes, “Pizza Party Ben and Milo Yiannopoulos began making the gesture together at various events supporting the candidacy of Donald Trump.”

On February 13, 2017, a few weeks before the 4chan post, Jim Hoft and Lucian Wintrich of the alt-right outlet Gateway Pundit made the okay symbol in the White House Press Room. The left-leaning media watchdog Media Matters denounced it as a “hate symbol,” noting that images of alt-right mascot Pepe the Frog sometimes showed the character doing the “okay” sign:

A far bigger blow-up occurred the following April when journalist Emma Roller, then of Splinter, tweeted a photo of alt-right celebrities Cassandra Fairbanks and Mike Cernovich making the okay sign in the White House press room:

To Channers and alt-right loyalists, this was the ultimate proof that the prank had worked: A left-leaning journalist had been fooled into thinking an innocuous hand gesture was a secret sign of deep, racist evil. Especially funny to them was when Roller explained her tweet by referencing a diagram … originating in the 4chan post that launched “Operation O-KKK”:

At first Fairbanks and Cernovich seemed to be having a laugh over the whole situation. Fairbanks told BuzzFeed News’s Joe Bernstein: “There was a troll meme going around saying that it meant white power. But it was a joke because Trump supporters are always being called Nazis even when it isn’t true.” Cernovich told Bernstein that he borrowed the hand gesture from Jay-Z, and from a conspiracy theory alleging that Jay-Z used the gesture as a sign he’s in the Illuminati.

Fairbanks would later purport to take the accusation a bit more seriously, and sued Roller for defamation in federal court. Judge Trevor McFadden of the DC District Court, a Trump appointee, dismissed the lawsuit in an opinion memorably beginning, “Plaintiff Cassandra Fairbanks trolled the web through Twitter …”

Holt at Right Wing Watch said that, meanwhile, “people at the ADL and people like me who follow this stuff full-time tried to explain that this is not actually a symbol tied to white supremacy in any way.”

Another iteration of the controversy exploded in December 2017, when the Daily Mail reported that White House intern Jack Breuer had flashed a “known ‘white power’ sign during a photo-op with President Donald Trump.” Here’s the photo in question, from then-Mail reporter Jessica Chasmar:

In some of our intern pictures, I emulated the OK sign the President sometimes makes. That was foolish. I should have listened more closely to the Commander-in-Chief and given the thumbs up. (1/2)

I’m proud of my Jewish heritage and strongly reject the hateful views associated with racist white power organizations. I would never make common cause with them. (2/2)

Snopes, the fact-checking website, called the accusation against Breuer “unproven,” noting that the only evidence the Mail produced for the suggestion that Breuer intentionally made the sign as a show of alt-right solidarity was an anonymous quote from a fellow White House intern. Even that source conceded, “Jack’s a good kid and is probably doing it as a joke.”

Holt, at Right Wing Watch, said that while it began as a hoax, the symbol’s success as a troll has given it some new meaning in right-wing circles it didn’t have originally. He says intentional use of it falls into two camps. “One is white supremacists making a tongue-in-cheek inside joke to each other,” he said. “Then the larger contingent of people are people who do it in the photos to get a reaction and troll the libs.”

In the former camp, he includes people like Charlottesville rally organizer Jason Kessler; in the latter, folks like Cernovich, an alt-right troll who, while certainly a racist, is “probably more concerned with just trying to make liberals and the #resistance look as bad as humanly possible.”

The Bash incident, and what this means for the White House and liberalism

Zina Bash, the latest conservative ensnared in an okay sign controversy, has a more intellectual pedigree than her predecessors Breuer, Fairbanks, and Cernovich. According to her LinkedIn page, she holds degrees from Harvard College, Harvard Law School, and Penn’s Wharton business school, and she clerked for both Brett Kavanaugh on the DC Circuit (hence her presence at the hearings) and for Supreme Court Justice Samuel Alito.

Until recently, she worked in the Trump White House as a special assistant to the president for regulatory reform, legal and immigration policy. In July, she joined Texas Attorney General Ken Paxton’s office as a senior counsel.

It seems clear that Fairbanks and Cernovich were using the hand signal to troll the libs, and at least plausible that Breuer, Holt, and Wintrich were as well. (The latter two are pretty prominent alt-right racists, but their incident was also before the 4chan hoax began.) But was Bash? It’s certainly possible she was exposed to the idea of the troll.

That said, it’s equally if not more plausible that she was replying to a text message. (Some Twitter hand signal detectives argued she can be seen getting an alert on her phone before the hand signal appears.) Or maybe she was signaling to someone watching the livestream; sending an okay signal to a senator or staffer sitting opposite her and Kavanaugh; or just fidgeting with her fingers.

There’s simply no reason, other than an epistemological commitment to assuming the absolute worst of absolutely everyone ever associated with the Trump administration, to believe she did a small hand movement to prove her commitment to white supremacy.

It’s, of course, natural for fake news about the president and his aides to proliferate among their political critics. When I was 14, I really sincerely believed that George W. Bush had snuck in an earpiece so he could be fed answers during his debates with John Kerry, and that the “bulge” in the back of his suit jacket proved this.

This was, of course, nonsense. But Bush really was awful, and really was prosecuting a horrific war killing hundreds of thousands of people and torturing many more. That made ridiculous suggestions, like that Bush had to cheat at televised debates, seem plausible to me (that, plus I was 14 and my brain was small and unformed).

And, of course, fake news about Barack Obama (he’s secretly Kenyan!) and Bill Clinton (he’s a cocaine trafficker!) spread wildly among conservatives during their presidencies.

But in a way, the Zina Bash fake news is stranger, because it seems to confirm something we all already know: The Trump administration contains racists who want to use policy to harm nonwhite people. You don’t need a hand signal to know that.

Take, say, Rosie Gray’s exposé in the Atlantic of Homeland Security staffer Ian M. Smith, who was close with numerous white nationalists and went to a house party advertised as judenfrei (or “free of Jews”). Or take Stephen Miller, the White House domestic policy adviser responsible for the partial implementation of Trump’s promise to ban Muslims from the US and for the policy of separating immigrant families, and who alt-right leader Richard Spencer has described as a friend and ally when they were at Duke together.

Or take, I don’t know, the president: a man who as a candidate promised to ban all Muslims from the US, who calls Elizabeth Warren “Pocahontas,” who said that a Mexican-American judge is unfit to preside over cases involving him, who called Mexican immigrants “rapists,” claimed Muslim-Americans celebrated the 9/11 attacks. And then, after all that, a man who came into office and set about implementing the most anti-immigrant policies in years, slowing housing discrimination law enforcement to a halt, and reorienting the Justice Department away from fighting racial discrimination against black Americans. Oh, and who empathized with neo-Nazis after Charlottesville, and described Haiti and African nations as “shithole” countries, for good measure.

We don’t need to interpret hand signals to know where this administration stands on racism and white supremacy. We know very well where it stands.