NEYMAR must leave PSG this summer and put an end to his hedonistic partying days, his compatriot Rivaldo has advised.

The future of the world’s most expensive player is currently in the balance with reports that the Brazilian superstar is keen to leave PSG.

Having quit Barcelona two years ago to join the Ligue 1 champions in a £198million transfer the strongest rumour is that the 27-year-old striker will return to the Nou Camp.

He reportedly text his former team-mates recently to tell them that he would be back.

He also sent a message to PSG president Nasser Al-Khelaif, allegedly saying: “I do not want to play more in PSG. I want to go back to my house, where I should never have left.”

Rivaldo wants to see that happen in the current transfer window, particularly after Al-Khelaif signalled that now might be the right time for Neymar to go.

Rivaldo told SunSport: “He has to take the decision now, not wait for another season.

“Leaving Barcelona was a very sudden and quick decision. Also, the PSG president has left the door open, if he wants to leave, for him or any other players.”

Rivaldo, a Betfair ambassador who played for Barcelona from 1997 to 2002, thinks Neymar should never have left Catalonia.

“He’s a brilliant player who made a mistake in leaving Barcelona.

“I think it’s a good opportunity to come back, and if he comes back here, everything will change in his life, and he’ll have good possibilities.

“I think he’s done good things for PSG. [But] the league is not the same, like the English league or Spanish league. The French league is good but not so good for a player of Neymar’s level.”

Neymar’s departure from Barcelona was a tough one for the proud Spanish champions to take and Rivaldo believes that his compatriot will have to make amends with fans – and bring an end to his party boy antics.

The Ballon d’Or winner said: “70 per cent are not going to be happy with him, and are probably going to be annoyed with him!

“But I think he has the personality to win them over, and if he does well, scores goals, plays football like he’s always done, do his job, doesn’t go out with friends partying and makes Barcelona champions, everything will be forgotten.”

During his time at PSG – and his spell at Barcelona – Neymar has had a reputation for enjoying himself.

Earlier this year the flamboyant ace put on a huge red-themed bash for his birthday at which he arrived needing crutches due to an injury. 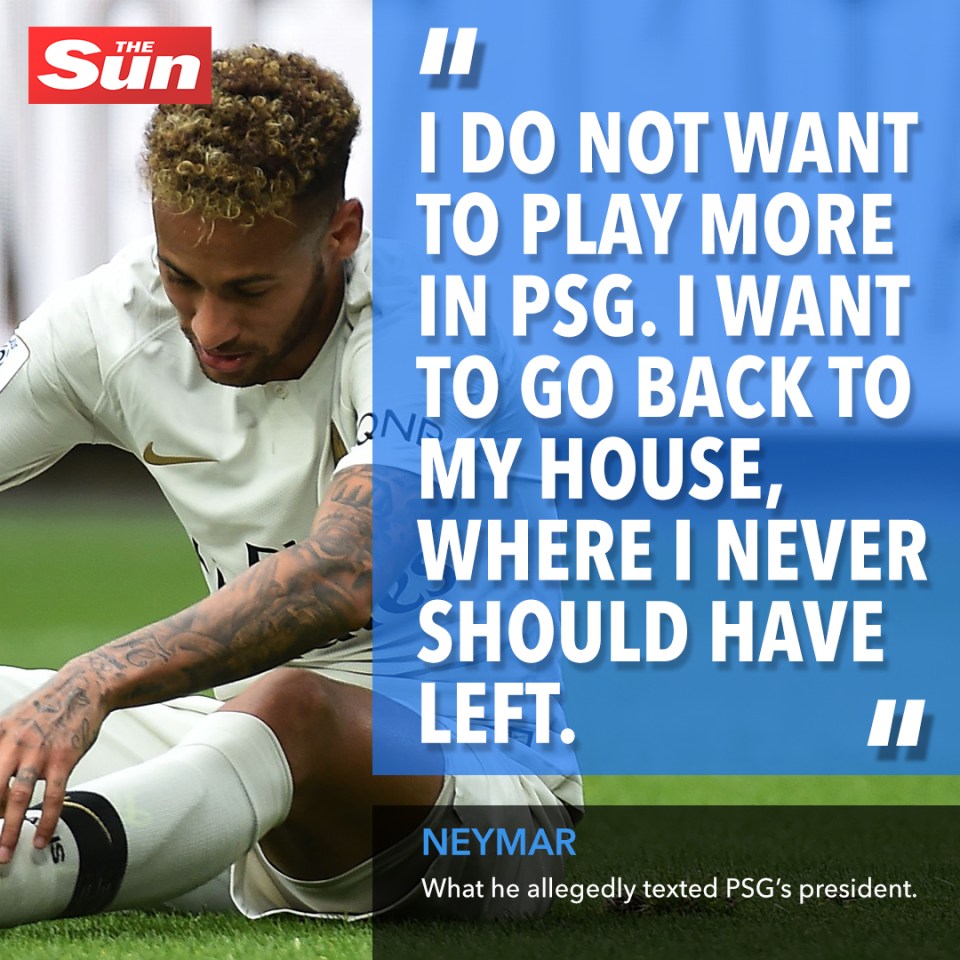 Real Madrid could also be an option for Neymar if he quits PSG this summer – and even a move to Manchester United has been mooted – but Rivaldo is urging him to come “home” amid reports that the player himself could be willing to make a public apology for the way he left.

He said: “I think he’d have to demonstrate more to Madrid because here everyone knows him, and how he plays.

“For Neymar, it’s only at the start that people are annoyed here, but here is his home. Once he starts playing again, people will love him again.”

At the time of his departure, there was much speculation that Neymar wished to escape the shadow of Lionel Messi.

However Rivaldo believes the move to PSG was strictly financially motivated, with Neymar understood to be earning £900,000-a-week in the French capital.


Rafa is worth 15 points a season.. it’s a shambles and travesty letting him go

Speaking at the Nou Camp at a Betfair event he said: “Well, everyone knows there was a financial element, that’s why it happened. It was a tremendous bid.

“It was a lot of money for Barcelona, and more that than being in Messi’s shadow.

“Neymar knows Messi is a great player. He didn’t worry about the shadow of Messi.”

As official betting partner of Barcelona, Betfair invited supporters from all around the world to play in a tournament at Camp Nou. Fans won a place by testing their Barca knowledge in a quiz named ‘Beat The Elite’ where they had to better the score of 1999 Ballon d’Or winner and Betfair Ambassador Rivaldo.