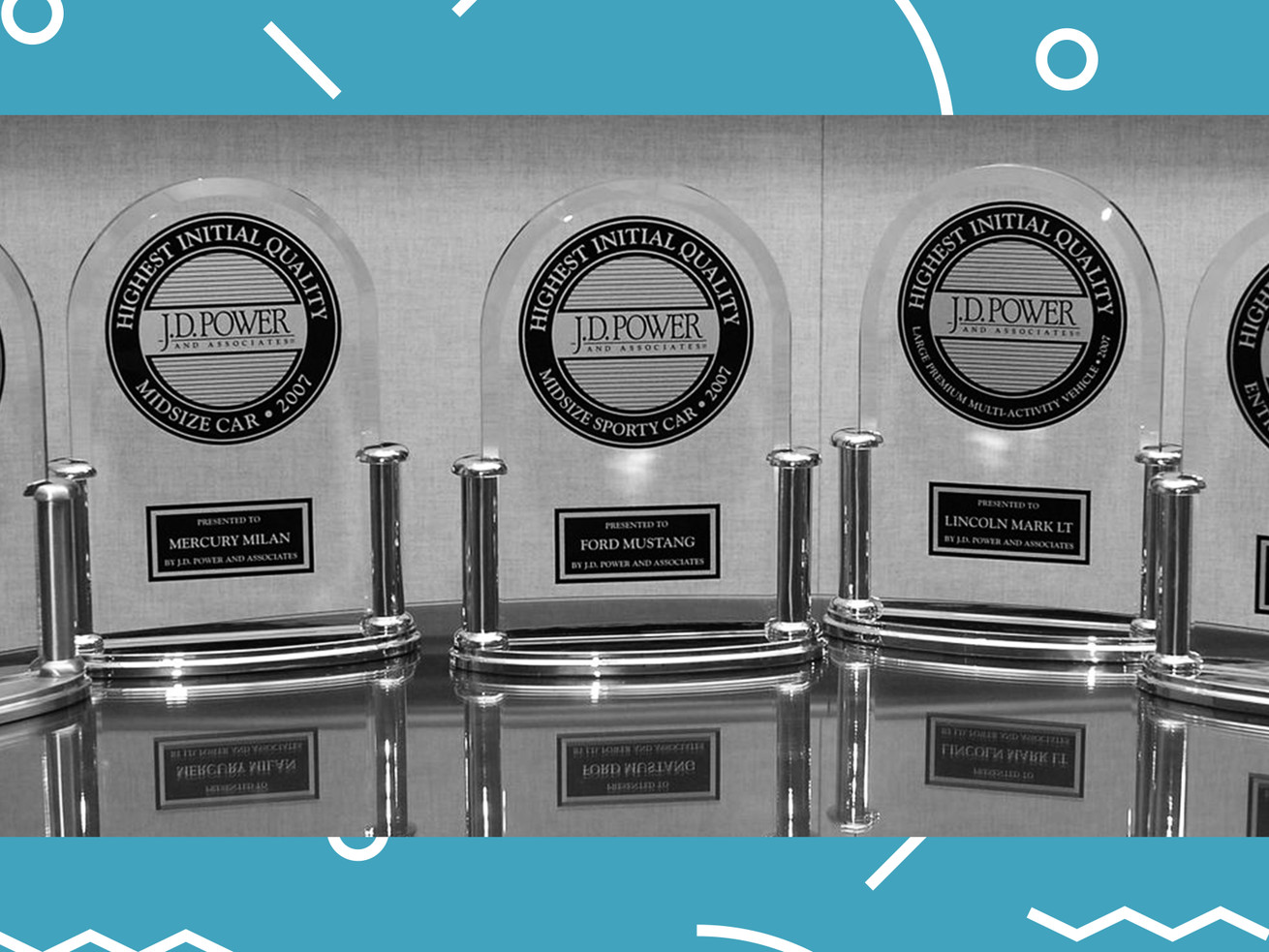 How James David Power III created the only car ranking company you’ve ever heard of.

I’m not sure how many times I’ve personally heard the words “J.D. Power and Associates,” but it’s definitely often enough that I’ve accepted it as a part of my reality that needs no further explanation. The phrase is a permanent fixture of late-night TV, when car commercials boom through your speakers at inexplicably loud volumes. You’ve heard it in ads for Chevys, Lexuses, and Fords.

And because of its consistent place in advertisements, I’ve always believed two things: one, that J.D. Power is a very important institution, and, two, some people must know what it is. Why else would it be worth mentioning in a 30-second car ad?

J.D. Power is a marketing firm best known for its automotive research; it collects consumer responses for a variety of surveys (asking drivers about the reliability of their car’s transmission or the comfort of the passenger seat or performance of the navigation system) and then awards car models rankings based on those surveys. But how helpful those surveys are to car designers and car consumers is up for debate. And the reason car companies choose to so frequently include J.D Power rankings in their commercials has less to do with the surveys’ legitimacy than with how recognizable the firm has become to consumers.

James David Power III and his wife, Julie, started J.D. Power and Associates in 1968. According to Jalopnik, the “associates” were Power’s wife and children. By the time he started this venture, his résumé was a mix of auto and advertising, first auditing dealers in the tractor department at Ford and then moving on to the research division at the advertising agency McCann (formerly McCann-Erikson), and then to market research for a chainsaw manufacturer. Power’s experiences taught him not only how to conduct detailed market research but also that detailed market research wasn’t something car manufacturers had access to.

So J.D. Power and Associates began with Power and his wife mailing out surveys and tabulating the results at their kitchen table. It wasn’t until 1973 that they gained national attention for their work. When looking at the surveys, Julie found that one-fifth of the rotary engines on a Mazda R100 were failing somewhere between 30,000 and 50,000 miles. The survey concluded that the engine’s failure was due to bad O-ring gaskets. Even if you’re not sure what all of this means, it’s easy to see how this information — sputtering engines, faulty parts — was sensational enough to make the Wall Street Journal front page, which it did.

Soon, every automaker was buying J.D. Power’s research. Today, its roster of current and past buyers includes BMW, GM, Hyundai, and Volvo. J.D. Power’s corporate communication director Geno Effler tells me, “You can go ahead and include every car manufacturer that operates in the United States on that list.”

Over the next decade, J.D. Power became an industry name, but a mention during a well-timed 1984 ad made the market research firm a household name. During Super Bowl 18, Subaru aired the first commercial to boast its J.D. Power rankings. Since then, J.D. Power has been mentioned in more than 350,000 television ads and 2 billion print ads, according to its website.

The cost of a 30-second commercial at Super Bowl 18 was $368,200. The beauty of J.D. Power’s Super Bowl debut is that the firm likely didn’t pay directly for a cent of the ad — if anything, it probably got paid. At the time, J.D. Power charged companies like Subaru $350 to mention its study for 10 months. Power saw the bigger benefit as publicity, rather than money, but soon the firm upped that number. (Today J.D. Power does not disclose how much an automaker pays to include the company’s findings.)

Power sold the company to McGraw Hill Financial (now S&P Global) in 2005 for $400 million, after which it dropped “Associates” from its title, and in 2016 it was acquired by XIO Group for $1.1 billion. “But there are still lots of people at J.D. Power who were here when Dave was here,” Effler says.

Three years after that Subaru commercial, J.D. Power debuted its Initial Quality Study, one of the firm’s more frequently consulted offerings. The survey asks car buyers to divulge any “problem” with a car they’ve had in the first 90 days after purchasing, and quantifies these problems into a ranking. The survey contains more than 200 questions in eight categories (exterior, interior, features/controls/displays, audio/entertainment/navigation systems, seats, climate controls, powertrain, and driving experience), and answers are supposed to reflect the “voice of the customer,” according to Car and Driver. But the problem with reflecting the voice of the customer is that customers voice not just concrete issues but also their opinions.

Effler says that when the study was first conducted more than 30 years ago, cars had fewer bells and whistles, so the survey did usually just evaluate the mechanics. But today, he says, cars are like “computers on wheels,” which is why consumers can flag things that are difficult to use, even if they aren’t malfunctioning. “It is a measure of vehicle quality as perceived by the consumer,” he says.

In recent years, J.D. Power’s IQS has come under a lot of scrutiny from publications like Car and Driver and Extreme Tech for what it classifies as a problem and how it uses consumer surveys to rank vehicles. The survey records “problems,” but this could mean an actual problem with the function of the car, or a problem a driver has personally with a feature in the car. For example, a faulty door lock and a frustration with voice command would be equally weighted as “problems,” even if the voice command is working exactly as it’s supposed to. In this sense, J.D. Power’s IQS is not reflective of quality, like the name implies, as much as consumer satisfaction.

Still, this can be helpful in its own way. Ezra Dyer of Popular Mechanics says that when he was at the Kia factory in Georgia a few years ago, Kia employees told him that when they first released the Sorrento, J.D. Power’s IQS report informed them that customers didn’t think the back windshield wiper should be a button on the dashboard but a rotary switch on the steering wheel. The next year, Kia changed this design and customers no longer had a problem with it. In this instance, the fact that the survey collected what people didn’t like — not only what didn’t work — was helpful to Kia.

“That’s a big part of that survey,” Dyer says. “It’s not just, ‘Did your car break?’ but, ‘How is your car annoying you?’ So when a car company rolls out some new feature that nobody likes or is hugely confusing or both, the manufacturer can hear about it from real customers and hopefully change course.”

After acting on feedback from the IQS, Kia moved to No. 1 in the rankings, but it still doesn’t mention J.D. Power in many advertisements. Dyer suspects it’s because the company doesn’t want to draw attention to its prior negative ranking (no one wants the Most Improved trophy). Porsche is another car manufacturer that doesn’t mention J.D. Power in its commercial, despite its high rankings. “J.D. Power is kind of a weird beast where it’s both overblown by some marketers and, behind the scenes, actually useful to manufacturers in making cars more reliable and easier to use,” Dyer says.

Knowing how J.D. Power conducts its research, it’s easier to see why car companies mention it so frequently; it’s a survey theoretically filled out by customers just like you and me, with rankings that would be relevant to customers just like you and me. Even if it isn’t indicative of anything concrete but rather customer satisfaction, car companies find some value in that.

But why do we find such value in it? Our acceptance of J.D. Power as an authority on something, even if we don’t know what, may well have to do with the name itself. It feels specifically manufactured by someone inventing a car ranking company, not the real initials of a real person.

It’s hard to say how many people know what J.D. Power and Associates is. Just last year, Chevy debuted a commercial where “real people” discovered that Chevy received more J.D. Power Initial Quality Awards than any other car company. The commercial shows consumers responding with low-energy exclamatives like “wow,” “I’m speechless,” and the somehow even more robotic, “That really makes me a lot more confident in Chevy as a brand.”

Later, the A.V. Club interviewed one of the real people (who was in fact a random person with no ties to the company) from the commercial, and found that none of the participants actually knew what J.D. Power was prior to filming. The participant told the A.V. Club, “[The spokesperson] was asking us all these buzzword questions, and then after a while he was like, ‘Do you know what a J.D. Power And Associates Award is?’ And we all go, ‘No.’ Because we all know they don’t really matter because nobody really knows what they are.” Even if you’ve heard of it, its function is still a mystery.

Jeff Galak, an associate professor of marketing at Carnegie Mellon University, says it’s this exact lack of knowledge that makes the award such a trustworthy prize. “People have no idea what it is,” he says. “If you say to somebody, ‘I have an award for the best cow,’ they don’t know how to evaluate a cow. But this award is ostensibly official-sounding.”

Effler agrees that some people may not know what exactly J.D. Power does, but because they are familiar with it, he believes they have a neutral to positive response to it, something also referred to as the “mere exposure effect.” The phenomenon states that the more you see or hear something, the more you like it. So those car commercials that you’ve seen a million times have in fact done something for J.D. Power — made you familiar with the name. “If anyone … made the term ‘customer satisfaction’ a part of the vernacular of America, it was J.D. Power,” Effler says.

Hearing “Winner of 3 J.D. Power Initial Quality Test Awards” means something because you have been told it means something, every time you sit in front of the TV.

2 comments on “Why every car commercial mentions J.D. Power and Associates”