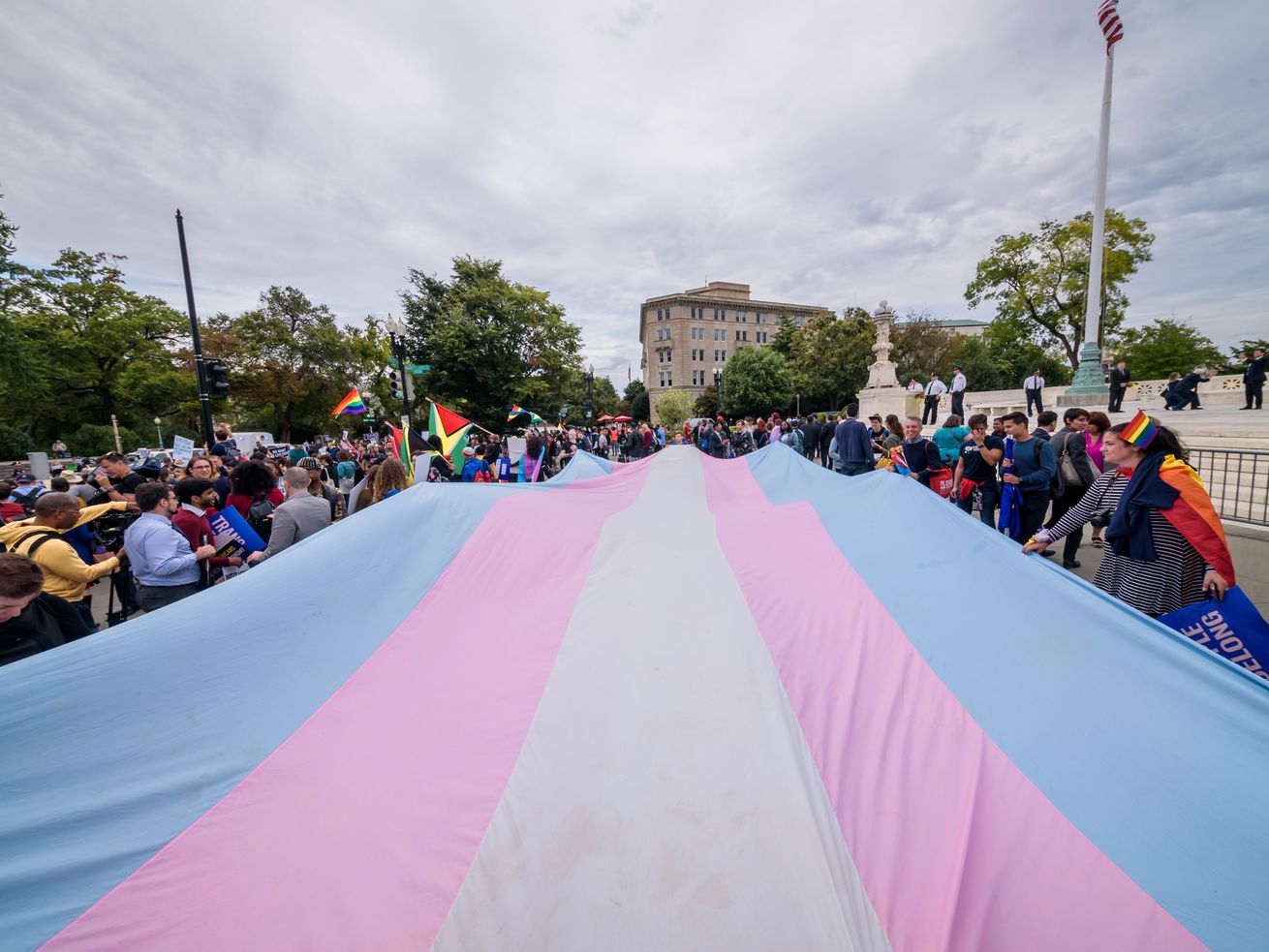 Demonstrators unfurl a Transgender Pride Flag outside the US Supreme Court on October 8, 2019. | Erik McGregor/LightRocket via Getty Images

It’s part of a bigger push around the country.

Trans children have been in the national spotlight in recent weeks, with the governor of Texas stepping in to try to stop a mother from allowing her child to transition. And on Wednesday, South Carolina legislators joined in with a bill that would ban a variety of medical treatments for trans children, potentially even antidepressants for gender dysphoria.

The bill, called the Youth Gender Reassignment Prevention Act, prohibits doctors from performing any “gender reassignment medical treatment” on a person under 18. Proposed by state Rep. Stewart Jones, a Republican, the bill isn’t just about surgery, which is uncommon for patients under 18 in any case. It would also ban hormones and puberty blockers, a reversible treatment that stops the physical changes associated with puberty. And it would prohibit doctors from performing “interventions to alleviate symptoms of clinically significant distress resulting from gender dysphoria,” or conflict between a person’s assigned gender and their gender identity.

The proposed legislation has an exception allowing mental health counseling. Still, it is so broad that it could ban medication for depression associated with gender dysphoria, Colleen Condon, board president of the South Carolina LGBTQ rights group Alliance for Full Acceptance, told Vox. Because “interventions” covered by the bill could include allowing a child to dress in accordance with their gender identity, she added, “It does seem to basically say you can’t be you.”

Pre-filed during a recess in the South Carolina legislature, the bill won’t get a hearing until January at the earliest. But it’s part of a larger trend around the country, with lawmakers in Texas, Georgia, and Kentucky floating bans on medical care for trans youth, as Katelyn Burns reports at Vox. If passed, trans rights advocates say, such laws are likely to harm trans youth, who are already at high risk of suicide and depression, by cutting off access to the care they need.

Speaking of Jones, the sponsor of the South Carolina bill, Condon said, “It feels like he’s trying to drive our trans teens to the grave.”

The Youth Gender Reassignment Prevention Act was pre-filed on November 20, which is also Transgender Day of Remembrance, a day honoring those who have died as a result of anti-trans violence.

But rather than addressing such violence, the bill would restrict what kind of medical care trans youth can receive.

Around the country, the care doctors recommend for trans children varies by age, as Burns reports. Before puberty, they typically perform no medical interventions at all. Rather, most major medical associations recommend the “affirming method” for young children who may be trans, allowing them to experiment with different pronouns or gender presentations as they wish.

The South Carolina bill would appear to ban both puberty blockers and cross-sex hormones (Jones has not yet responded to Vox’s request for comment on the bill). And because it bans interventions “to alleviate symptoms of clinically significant distress resulting from gender dysphoria,” it could ban the affirming method as well, preventing doctors from, for example, recommending that parents allow a child to dress or wear their hair in a way consistent with their gender identity.

Such a ban could be very dangerous for trans young people, who are already at high risk of attempting suicide, Condon said. In one recent study, over 50 percent of trans male teens said they had tried to end their own lives, along with nearly 30 percent of trans female teens.

The bill “is essentially state sponsored deadly violence against trans kids,” Chase Strangio, an attorney with the American Civil Liberties Union who recently argued a landmark LGBTQ rights case before the Supreme Court, said on Twitter.

I am an expert on the subject and this is essentially state sponsored deadly violence against trans kids. https://t.co/VCNbw2joFU

Doctors who prescribe puberty blockers and other care in South Carolina are doing so to help alleviate gender dysphoria and save young people’s lives, Condon added. “Any treatment that occurs is limited, thoughtful, and medically appropriate,” she said. The bill, by contrast, would force doctors “to actually commit malpractice” by denying treatment they believe is necessary for children’s health.

And yet under the bill, doctors who provide the banned treatments could lose their medical licenses.

It’s part of a bigger movement around the country

South Carolina is behind many other states when it comes to trans rights, Condon said, with one of the most difficult processes for legal transition in the country and no state law allowing people to change their legal gender. (California, by contrast, allows trans people to change their legal gender if they submit an affidavit attesting to their gender identity.) At least five trans people have been killed in the state this year, including 24-year-old Pebbles LaDime Doe, who was fatally shot in August.

But the Youth Gender Reassignment Prevention Act is not unique. As Burns reports, Texas state Rep. Matt Krause has pledged to introduce a bill banning puberty blockers in his state, while fellow Texas Rep. Steve Toth promised to introduce a bill defining the “transitioning of a minor” as child abuse. Their pledges came in the midst of a media firestorm over Luna Younger, a 7-year-old trans girl whose father wants to stop her from presenting as a girl. Texas Gov. Greg Abbott even got involved, saying he would ask state child protective services to investigate the girl’s mother, who is supportive of Younger’s gender identity.

Meanwhile, legislators in other states, including Kentucky and Georgia, are also considering legislation to restrict medical care for trans kids.

The push for such restrictions is reminiscent of “bathroom” bills, legislation over the last several years that sought to prevent trans people from using bathrooms consistent with their gender identity, as María Méndez of the Dallas Morning News notes. For a time, the bills became “the center of the country’s culture wars,” Vox’s German Lopez reported, with Republicans supporting the restrictions and LGBTQ rights groups launching protests and boycotts of states that had such laws on the books.

Medical care restrictions could become a similar battleground, and Republicans may be using them to stoke controversy and energize their base going into a general election year. “I’m not even sure how much Rep. Jones cares about this,” Condon said of the South Carolina bill, “as much as creating something that is red meat to draw those who are not supportive to the polls.”

Whatever the intent, Condon says the impact on trans people could be even more severe than that of bathroom bills. And proposals like the one in South Carolina have an impact on the entire LGBTQ community in the state, she said.

At a ceremony on Thursday night to mark Transgender Day of Remembrance, “there was just such shock and depression in our community,” Condon said. The group was remembering the trans people murdered in South Carolina this year, as well as a trans teenager who died by suicide after being denied hormone treatment.

“We are trying to save children’s lives,” Condon said.