A NEW ZEALAND tour company could be forced to pay out millions for organising a doomed trip to the White Island volcano, it’s reported.

White Island Tours is already facing a fine of up to £750,000 for helping to arrange for 24 passengers to visit the crater before it erupted, killing at least seven people.

White Island Tours is facing a fine, its claimed[/caption]

The White Island eruption has so far killed seven people, with scores injured and missing[/caption]

But the company could also be ordered to pay reparations potentially running into millions of pounds after New Zealand’s WorkSafe regulator announced a probe into the disaster, reports stuff.co.nz.

The Royal Caribbean, the cruise company that took the passengers on the trip, could also face additional lawsuits in America, where it is based.

However, New Zealand’s compensation act will prevent victims from launching personal injury claims against the firm, with any payouts being made by the government.

Graeme Christie, a specialist insurance lawyer, told the New Zealand Herald that grieving families could look into filing a suit in America to avoid restrictions in New Zealand.

If courts there find Royal Caribbean has is a case to answer, then the company could face personal injury claims potentially running into the tens of millions, it’s claimed.

A Royal Caribbean spokesman refused to say whether the company organised the volcano tour itself, or whether it sub-contracted the responsibility to another firm.

A group watch the eruption from a boat[/caption]

The company said in a statement: “We grieve this tragic loss. We will to continue to offer our support and services to the families during this difficult time.

So far, at least seven people have died following Monday’s blast, with another nine officially listed as missing and 30 injured.

And the death toll could rise with 29 people in intensive care in several hospitals around the country, including two British women who were injured in the eruption.

WorkSafe, the public body responsible for enforcing New Zealand’s Health and Safety Act, announced Tuesday that it is investigating the disaster on White Island which involved White Island Tours.

The regulator has 12 months to complete its investigation.

It could then decide to prosecute the company for failing to keep its staff and guests safe.

Today, it emerged three more Australians died in the disaster.

Jason Griffiths, 33, from Coffs Harbour, NSW, has died from his injuries after he was taken to hospital in critical condition.

He had been travelling with couple Karla Mathews, 32, and Richard Elzer, 32, who were among those still on the island and are now dead, friends said.

Zoe Hosking, 15, who has been confirmed among those killed in the White Island volcanic eruption[/caption]

Julie Richards, 47 and Jessica Richards, 20, of Brisbane, were named by New Zealand Police as the first two Australians killed in the disaster[/caption]

In a statement issued by the Dallow family, grieving relatives said they “mourn the loss of Gavin and Zoe.”

“Our hearts break at the loss of Zoe at such a young age.”

It is just devastating news

Zoe was an active Girl Guides member while her mother and stepfather are adored by the Rotary Club of Adelaide.

When asked to summarise the impact of his son’s death, Mr Dallow said: “Naturally, it will have a big impact. We’re just coming on Christmas. We’re really going to miss him.”

Brisbane mother Julie Richards, 47, and her daughter Jessica, 20, were named by New Zealand Police earlier today as the first two Australians killed in the disaster.

John Mickel, a friend of Julie Richards’ brother Michael, spoke on behalf of the family in Brisbane today about the adventurous pair who loved the outdoors, as well as cruising.

“It is just devastating news,” he said. 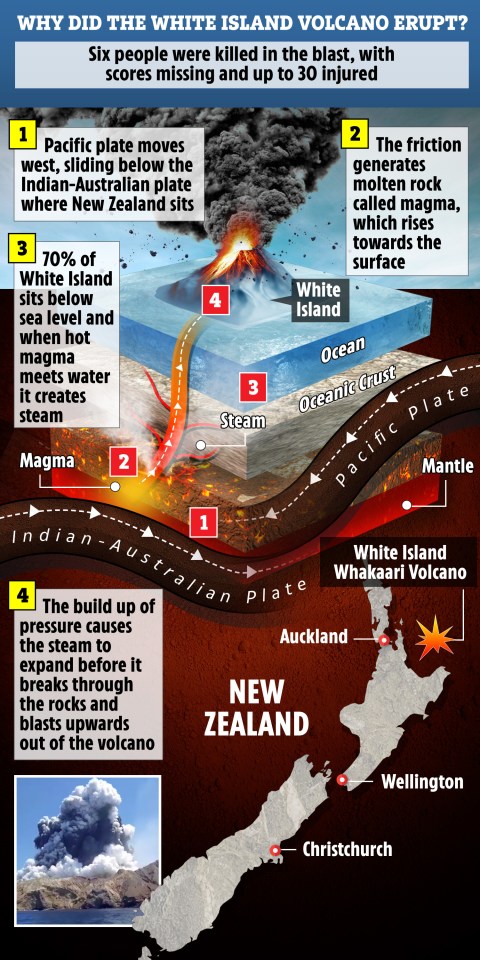 most read in news

FEARS FOR MY LIFE

GONE WITH THE WIND

UNHAPPIEST DAY OF HIS LIFE


World’s moodiest groom completely loses it in front of guests

Many of the victims also suffered inhalation burns to their lungs and airways, leaving them unable to speak.

New Zealand’s chief medic Pete Watson has said it is likely that not all of those currently being treated will survive.

Today it emerged that the country has ordered 1.2million square centimetres of human skin from Australia and the US to use in skin grafts for burns victims.