ELEVEN firearms have been ­stolen or lost from Ministry of Defence bases in the last year, it has admitted.

Four SA80 assault rifles, four target rifles and 1,000 rounds of .22 ammunition were taken from one cadet facility in Merseyside.

1,000 rounds of .22 ammunition were stolen from a cadet facility in Merseyside[/caption]

In a second theft, two .303 Lee-Enfield bolt-action rifles were swiped from a permanent display unit.

The SA80s had been deactivated — but a fifth lost in a deep-water exercise in Wales could be fired.

Another 150 bullets of different calibres were also lost from MoD bases, a Freedom of Information request for Sky News revealed.

Campaigners fear the missing arsenal may be sold over the dark web.

Gun Control Network said the haul could be “used in crime or hoarded by ‘gun enthusiasts’.” 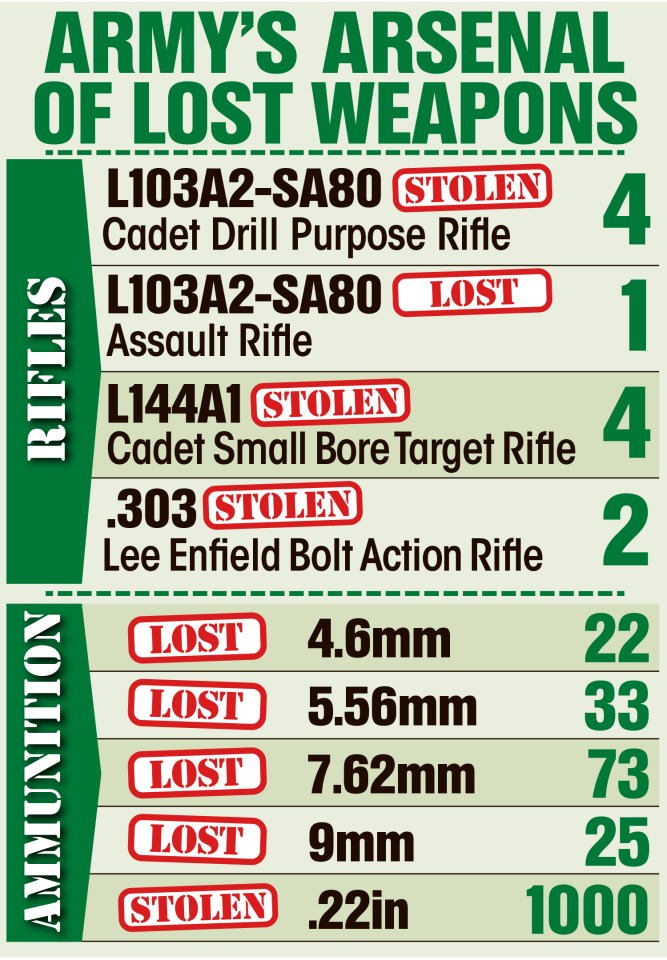 Who was Christine Keeler and what is the Arne Jacobsen chair photo?

Other items stolen in the year to September 29 included body armour, a helmet, nine radios, an airfield lighting cable, 30 computers and 210 laptops.

The MoD said: “We take security extremely seriously and have robust procedures to deter and prevent losses and thefts.

“All incidents are recorded so lessons can be learnt and disciplinary action or prosecution taken.”