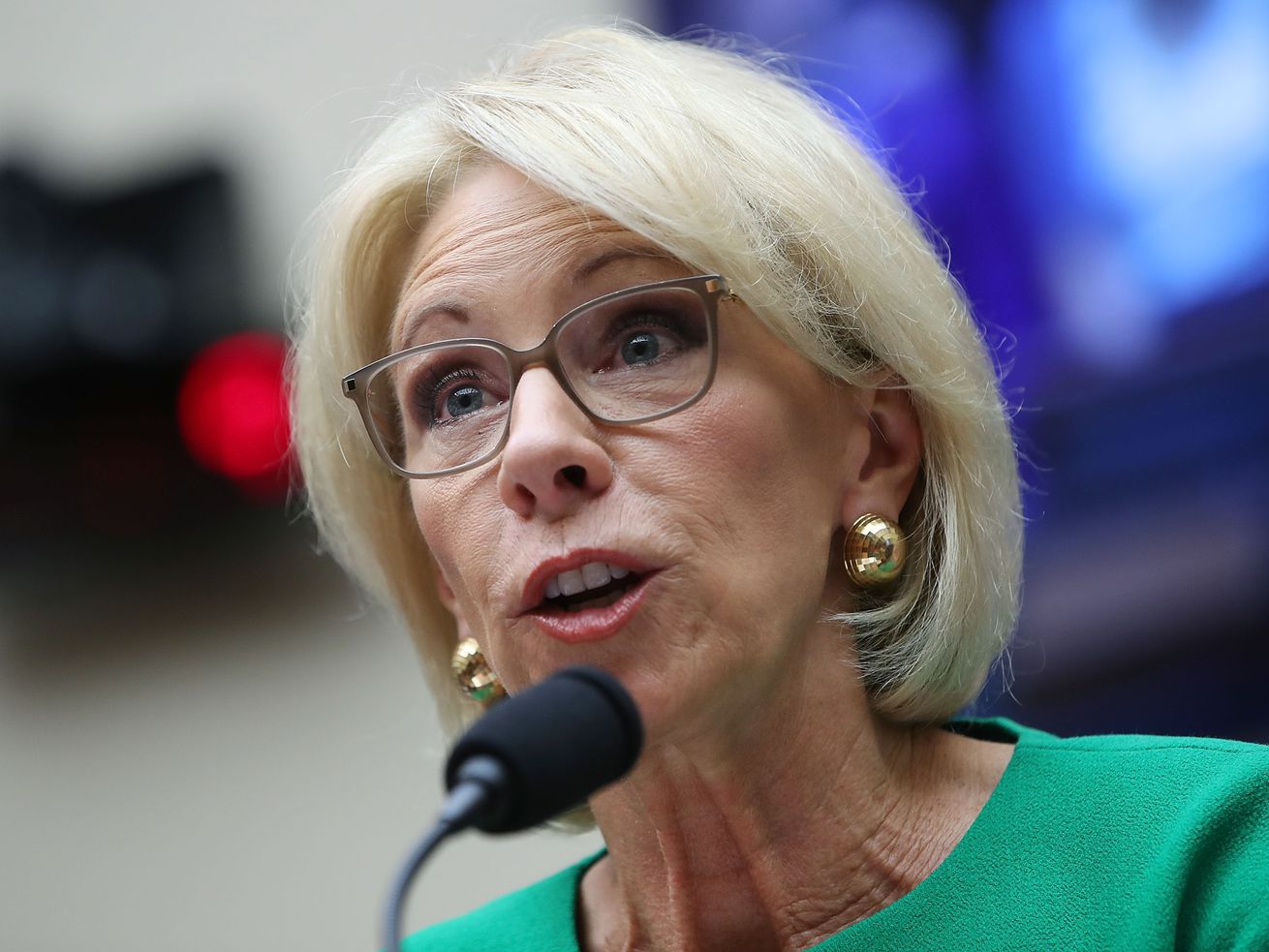 The education secretary says it’s one of the “difficult decisions” the Trump administration had to make.

Education Secretary Betsy DeVos is struggling to defend the Trump administration’s proposal to cut funding for the Special Olympics from the federal budget — an idea that triggered a ferocious backlash this week among Democrats, celebrities, and sports personalities. Many Republicans have refrained from weighing in, though one GOP senator reassured the public that the cuts wouldn’t be approved.

“The world needs more [Special Olympics],” Julie Foudy, a retired soccer player and now an ESPN host, said on Twitter. “The joy these athletes pass on is absolutely contagious.”

DeVos appeared before a House Appropriations Committee subcommittee hearing this week to defend the Department of Education’s budget request for 2020, rolled out earlier this month as part of President Donald Trump’s full budget request. The Education Department’s budget was set at $64 billion, about $7 billion less than its current budget. She also appeared before a Senate hearing on the budget on Thursday.

The Special Olympics cut would result in $17.6 million in savings. It was one of 29 programs the budget proposed eliminating that it states “achieved their original purpose, duplicate other programs, are narrowly focused, or are unable to demonstrate effectiveness.”

DeVos told the House she believes Special Olympics is an “awesome organization, one that is supported by the philanthropic sector as well.” In other words, she thinks that if the government cuts funding, the private sector will step in.

As Politico notes, the department’s last two budgets also sought to eliminate funding for Special Olympics education programs. It’s unlikely the proposal will actually make it very far in Congress. But it is demonstrative of a Trump administration that is willing to undercut support for the most vulnerable while at the same time enacting tax cuts that disproportionately benefit corporations and the wealthy and boosting spending on defense.

Trump apparently felt the pressure and on Thursday reversed course. “The Special Olympics will be funded, I just told my people,” he told reporters. But of course, as mentioned, what to do was up to Congress, anyway.

DeVos has gotten a lot of blowback over this

Rep. Mark Pocan (D-WI) asked the secretary if she knew how many children would be affected by the proposed cut. DeVos initially tried to sidestep the question, acknowledging instead that “we had to make some difficult decisions with this budget.” Pocan answered for her: the cut would affect 272,000 kids.

Pocan also noted that the budget proposes a 26 percent cut to special education grants to states and cuts to the National Technical Institute for the Blind; Gallaudet University, a university for the deaf and hard of hearing; and a federal program for print books for blind students.

“I have two nephews with autism,” Pocan said. “What is it that we have a problem with — with children who are in special education? Why are we cutting all of these programs over and over within this budget?”

Rep. Barbara Lee (D-CA) also criticized DeVos. “I still can’t understand why you would go after disabled children in your budget. You zero that out. It’s appalling,” she said.

“Unbelievable,” Sen. Bernie Sanders (I-VT) wrote in a tweet. “When we are in the White House we will get our national priorities straight.”

Trump and DeVos want to slash education spending and defund the Special Olympics after giving tax breaks to the top 1%. Unbelievable. When we are in the White House we will get our national priorities straight. https://t.co/b1qpE9SA2t

Former Ohio Gov. John Kasich, a Republican who competed with Trump in the 2016 presidential race, called the administration’s proposed cuts “outrageous.” Sen. Roy Blunt (R-MO), chair of the Senate Appropriations subcommittee that deals with the Department of Education’s funding, in a statement said the Special Olympics cuts wouldn’t be approved.

Look, I’m not perfect but at least my obituary won’t say, “and in 2019, he defunded the Special Olympics.”

Special Olympics was founded in 1968 by Eunice Kennedy Shriver. According to its website, it reaches more than 5 million athletes in 174 countries.

Special Olympics chair Timothy Shriver spoke with MSNBC about the proposal on Wednesday and said that the Trump administration is “missing a big story” in what it’s trying to do.

“There’s a much bigger story going on in the country, in our schools, young people who are fighting intolerance, who want to have programs in their schools that allow them to meet their peers who have differences, who want to overcome fear of difference and replace it with the choice of inclusion,” he said. “That’s what the Special Olympics movement is doing today in schools. And so while the philanthropic traditions we have of volunteerism and private support are important, we’re now in a new ballgame of trying to educate young people about the importance of an inclusive mindset to the future of the country.”

Shriver said more than 6,500 schools participate in the Special Olympics and some 2 million people are involved, working to “end this age-old fear of children who are different and replace it with a much more inclusive worldview.”

The organization also put out a statement.

Full statement from Chairman @TimShriver on the proposed funding cuts for our education programs in the United States ➡️ https://t.co/P59cuvmjmx pic.twitter.com/dTKO1Ho5Pv

DeVos says this is all being taken out of context

DeVos reacted to the blowback over the budget cuts in a statement on Wednesday and sought to cast it as an overreaction by the media and Democrats, who have “spun up falsehoods and fully misrepresented the facts.”

She pointed to the department’s $13.2 billion request for funding under the Individuals with Disabilities Education Act, the same level as is currently appropriated by Congress now, which she said “goes directly to states to ensure students with disabilities have the resources and supports they need.”

DeVos said she loves the Special Olympics and has personally supported its mission, but there are “dozens of worthy nonprofits that support students and adults with disabilities that don’t get a dime of federal grant money.” She said the government can’t fund everything, especially ones that get private donations. DeVos, a billionaire, donates her salary to four organizations, one of which is the Special Olympics.

DeVos in January 2017 raised eyebrows when during her confirmation hearing she seemed to suggest the handling of the enforcement of the Individuals with Disabilities Education Act is “best left to the states.” Later in the hearing, she said she “may have confused” the fact that it is federal law. In October 2017, the Education Department under her watch rescinded 72 policy documents on the rights of students with disabilities that it determined were “outdated, unnecessary, or ineffective.”

The news moves fast. Catch up at the end of the day: Subscribe to Today, Explained, Vox’s daily news podcast, or sign up for our evening email newsletter, Vox Sentences.