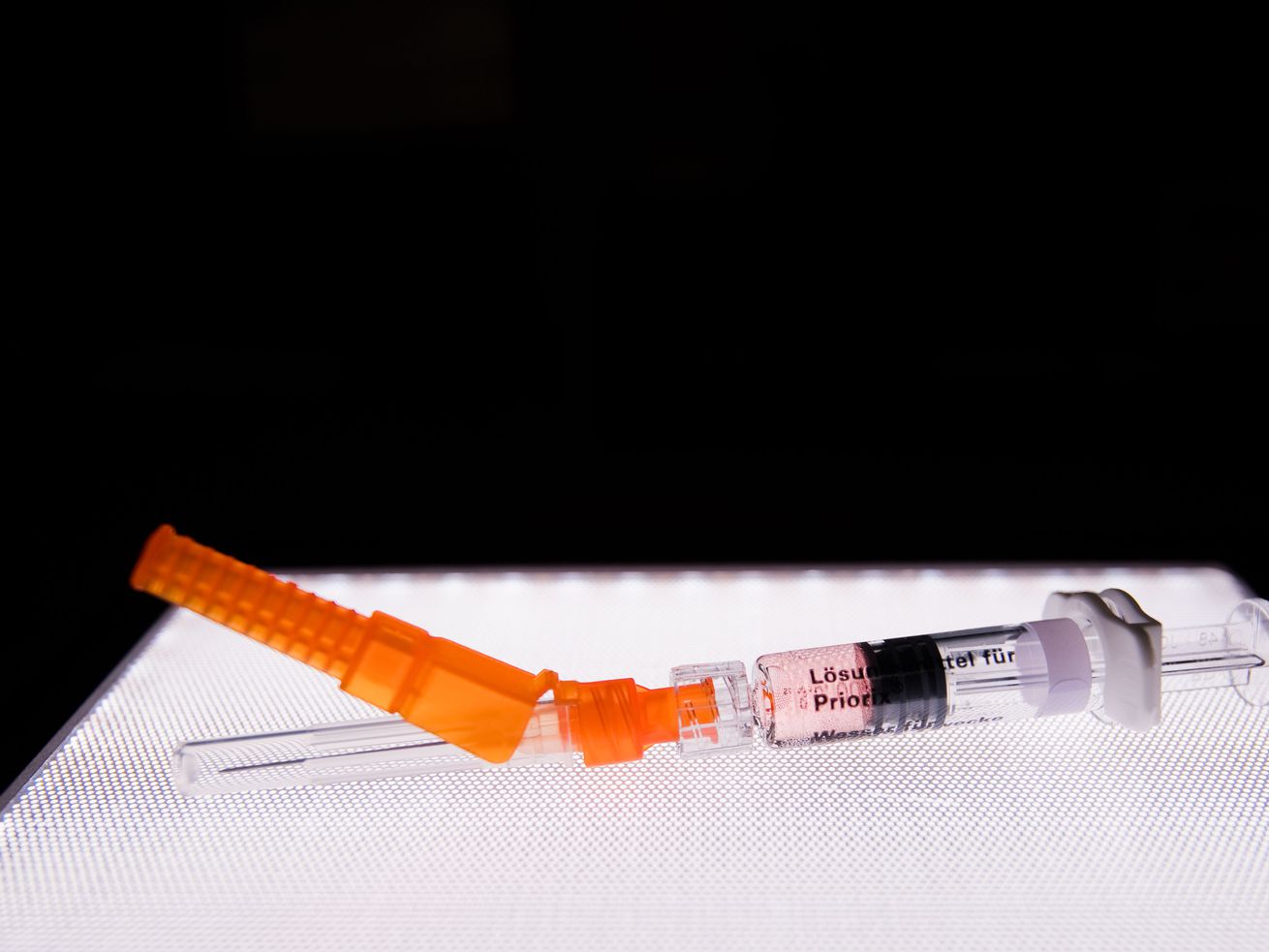 With the help of vaccines, America eliminated measles in 2000. Now that status is under threat. | Photo by Julian Stratenschulte/picture alliance via Getty Images

If an outbreak in New York state continues, the US will no longer be considered a nation that eliminated measles.

My father, like many of his generation, is hard of hearing, and he’s pretty sure a childhood brush with measles in Canada is to blame. The most contagious virus known to humans, measles can also lead to blindness, brain swelling, intellectual disabilities, and, in rare cases, death.

But most people who grew up in Canada and the US after a vaccine was introduced in 1963 didn’t have to worry about all that. In 1978, federal health officials in America set their sights on eliminating the virus. As more and more people were immunized, measles cases plummeted. By 2000, the US was declared measles-free, and until recently in North America, the disease was mostly relegated to the realm of lore.

Now, that’s changing. Too many people have forgotten how serious measles is, and they’re opting out of vaccines. Because of that, we all have to worry about measles again. In the beginning of September, the Centers for Disease Control and Prevention recorded more than 1,200 measles cases in the US. That’s the largest number for any year since 1992. It’s also a huge uptick compared to 2018, when 372 cases were reported.

As a result, on October 2, the US could lose its measles-elimination status. That status is conferred on countries without continuous measles transmission for at least one year, where all measles cases can be linked back to a traveler who brought the virus from another country where it’s been circulating. If an outbreak in New York state marks its one-year anniversary at the beginning of October, our elimination status will go with it.

America certainly isn’t alone. Measles is surging around the world and other countries — including the United Kington, Greece, and Brazil — have lost their elimination status over the last year.

So we’re sliding backward on this public health measure, not quite to the pre-vaccine, measles-ridden world our parents and grandparents had to endure — but we’re trending in that direction. Here’s how that happened, and why it matters.

Why America’s measles-free status is under threat

Before a measles vaccine was introduced in the US, the country had 4 million cases with 48,000 hospitalizations and 500 deaths in the US every year. Measles was also a leading killer of children globally.

The beauty of the vaccine is that most people who get the proper dose will never get sick with measles, even if they’re exposed. And by 2000, because of widespread vaccination, the virus was declared eliminated in the US.

But ongoing outbreaks in New York state threaten to topple that public health achievement. “If transmission continues in New York, elimination status for measles will end when there is any measles case connected to that outbreak on or after October,” a CDC spokesperson told Vox.

More than 75 percent of this year’s 1,200-plus cases can be traced to New York, where patients with measles are still popping up in Rockland and Wyoming counties. Even though a related outbreak in New York City is officially over and the number of cases reported in the state has dwindled in the last several weeks, “a few of them are actually recent cases,” the spokesperson said. And right now, state health officials are still struggling to control the outbreak.

So how did we get here?

The CDC points the finger at travelers introducing the virus into tight-knit, under-vaccinated communities. These communities are cohesive and conservative. They speak the same languages and read or watch the same news. When vaccine doubt seeds itself in them, it can spread like wildfire. “We think these communities are more alike,” Nancy Messonnier, the director of CDC’s National Center for Immunization and Respiratory Diseases, told me in March, and their insularity helps “outbreaks escalate.”

In the case of New York state, the outbreak has been traced back to Ukraine, which has seen 50,000 measles cases over the last year. The current theory is that a boy from Israel was infected with the virus by another Israeli who’d traveled to Ukraine. When the boy visited the US, he brought the virus to New York’s Orthodox Jewish community, where a sizable subset of people refuse vaccines because of safety concerns.

After that, “There were also multiple importations [by travelers] during the outbreak into those communities that kept the outbreaks going,” the CDC spokesperson said.

So America’s outbreaks this year, like all the years after measles was eliminated, started with a traveler. But if the elimination status is lost and vaccine coverage rates dwindle, enough people could get the virus that outbreaks will start to be homegrown again.

To understand why, look at New York: Even though the state’s overall vaccine coverage rate was extremely high for measles in 2017-2018 — at 97.2 percent — enough people refused vaccines in these tight-knit, Orthodox Jewish communities that the highly contagious virus managed to spread like wildfire.

This phenomenon — of anti-vaccine “clustering” — is something researchers have been warning about for years. In 2017, Peter Hotez, a professor and dean of the National School of Tropical Medicine at Baylor College of Medicine, penned a New York Times op-ed warning measles was poised to make a comeback, in part because of the numerous hotspots across the country with high rates of unvaccinated people.

The article now seems quite prescient. “Our national leaders kept pointing to state-wide averages of [vaccine coverage],” Hotez told me recently. “I said who cares — that’s not how measles works. It’s these pockets where we’re seeing huge numbers of kids not being vaccinated [that matter].”

With measles, around 95 percent of people in a community have to be vaccinated in order to keep the disease from spreading, something called herd immunity. When enough people are vaccinated, even those who can’t be or aren’t yet are protected from the virus. That 95 percent number is unusually high because measles is so contagious. (Other less contagious diseases, like polio, only need a coverage rate around 80 percent.)

That means even a small blip in vaccine coverage — and especially a large one — can help the virus easily spread.

Saad Omer, a vaccine researcher and director of Yale’s Institute for Global Health, also published a warning about a measles resurgence several years back. In an academic paper in 2016, he predicted larger outbreaks by showing how national childhood vaccine coverage rates undercounted the number of kids who were susceptible to measles.

“When you look at people who are not fully vaccinated, or who are too young to be vaccinated, or [who lose immunity following childhood cancer] — those rates are accumulating,” Omer explained in an interview. And they were worrisome enough that Omer and his colleagues warned that these overlooked groups of susceptible kids should raise “concerns that endemic measles transmission could be reestablished despite the overall high level of immunity.”

Unfortunately, health officials haven’t heeded these warnings, the researchers argue. “What should have been done is a coherent national response to strengthening and developing the evidence base to address and increase vaccine acceptance,” said Omer. But that didn’t happen.

Hotez agrees. “My feeling is that our nation has not taken the steps needed to disarm this new anti-vaccine movement. That means measles will be come a new normal again.”

It certainly doesn’t help that, at the state level, many places make it too easy for vaccine- hesitant parents to avoid vaccines, by offering religious and philosophical exemptions (ie. reasons that have nothing to do with legitimate medical concerns). And across the country, even without an exemption, kids can be granted “conditional entrance” to school on the promise that they will be vaccinated, but schools don’t always bother to follow up.

That was part of New York’s story, until this year’s outbreak prompted a crackdown. The 2019-2020 school year will be the first during which religious exemptions to vaccines are no longer on offer in the state, so all kids entering school must initiate vaccines in the first weeks of school and prove that they’re fully vaccinated by the end of the school year. The new law makes New York only the fifth state in the nation to eliminate nonmedical vaccine exemptions. So many other states still have a lot of work to do.

Measles could be “the canary in the coal mine”

If New York’s outbreak continues into October, the loss of measles elimination status will be a gut punch to public health.

Eliminating measles took decades of work to achieve. “It was a confirmation that our system of immunization was working really well,” said Hotez. “The fact that measles is back is a worrying sign there’s a problem nationally in our immunization system, that there’s been a breakdown.”

“It’s a line in the sand,” said University of Pennsylvania researcher Alison Buttenheim, “to go back to having regularly circulating measles in the country.”

If that happens, we’ll have to start worrying about the virus again in our communities. And even if America manages to hang on to its elimination status this year, we’ll have to wonder whether our children are in schools with high enough vaccine rates, and we’ll have to think about measles whenever we travel with newborn babies or family members who can’t be immunized. (Hotez said he got a booster shot to make sure he’s up to date, and anyone who’s worried about their measles immunization status can get a blood test to make sure they have antibodies for the virus.)

It’s also possible that America gets the measles under control again soon, and that this doesn’t lead to a full-blown disease resurgence.

But measles could also be a signal for a bigger problem. Since it tops the list of contagious diseases, again, cases can begin to turn up even with a small decrease in vaccination coverage rats. And the vaccine coverage rates required for herd immunity are much lower for other less contagious diseases, said Walter Orenstein, an infectious diseases professor at Emory University School of Medicine. “So measles may be the canary in the coal mine in terms of identifying a bigger problem with under-immunization. There’s the potential if this continues to worsen, it may mean other diseases are making a comeback.”