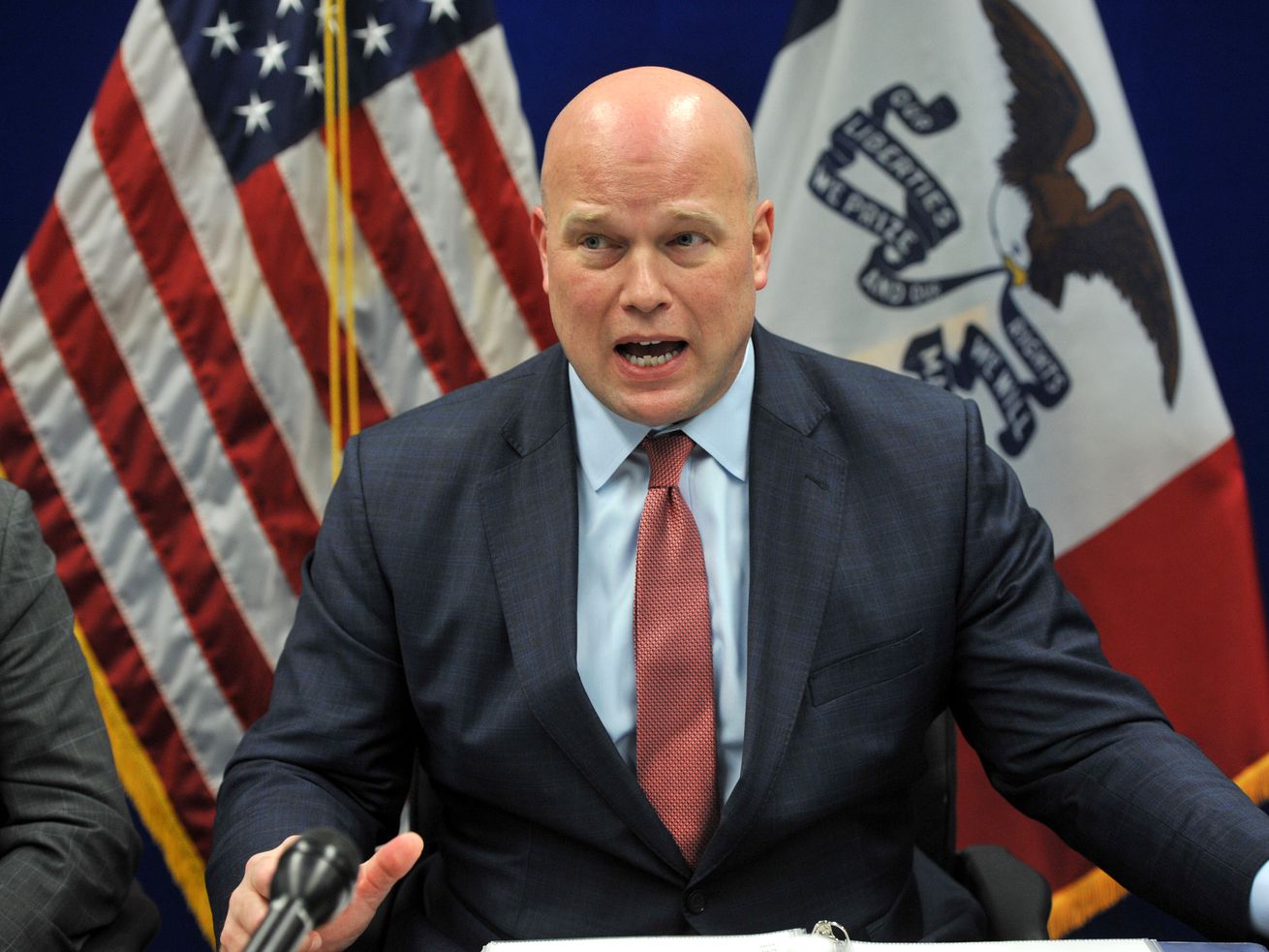 Lawyers are arguing that Whitaker’s appointment violates federal statutes and the Constitution.

Acting Attorney General Matthew Whitaker has been in office for less than three weeks, but legal challenges to his appointment are already piling up.

President Donald Trump selected Whitaker as the temporary replacement for Attorney General Jeff Sessions, who resigned at the president’s request earlier this month. It was a strange choice for a few reasons.

Whitaker served as Session’s chief of staff, which means Trump handpicked him for the role, rather than leaving Rod Rosenstein, the deputy attorney general and No. 2 at the Department of Justice, in charge.

Whitaker was also an odd choice for another reason: Prior to joining the administration, he had been a vocal and unabashed critic of special counsel Robert Mueller’s investigation into Russian interference in the 2016 presidential election.

This had led some calls, mostly from Democrats, that Whitaker recuse himself from the probe, which he now oversees. But these lawsuits are challenging his appointment as a matter of law, not ethics.

Trump made his decision to name Whitaker acting attorney general based on a provision in the Federal Vacancies Reform Act of 1998 (FVRA), which lays out a few categories of officials who can serve in executive branch roles if a vacancy opens up. Whitaker qualifies because he’s worked in the Justice Department for 90 consecutive days and is a high-level earner on the government pay scale.

But some legal scholars are arguing that Whitaker’s appointment is unconstitutional because he never received Senate confirmation, and other Senate-confirmed officers were available to fill the interim role.

Others are making the argument that the Justice Department’s order of succession should trump the Vacancies Reform Act, meaning Rosenstein should have been tapped to lead until a suitable replacement was nominated and Senate-confirmed.

Here’s what you need to know about some of the cases brought so far.

What the case is about: Senate Democrats want to block Whitaker from serving as acting AG, arguing that his appointment violates the Constitution because he lacks Senate confirmation. Even though the role is temporary, they say, it tramples on the Appointments Clause, which gives the Senate the “advice and consent power” over “principal officers” — high-level Cabinet positions, of which the attorney general is definitely one.

Senators say there are legitimate questions about Whitaker’s background, from his comments about special counsel Robert Mueller to his sketchy business dealings to his pretty thin legal résumé. This would make for a contentious Senate confirmation in normal circumstances, but Whitaker, as acting AG, doesn’t have to face lawmakers’ scrutiny while still being empowered to carry out all the duties of the nation’s chief law enforcement officer.

“If allowed to stand,” Senate Democrats argue in their lawsuit, “Mr. Whitaker’s appointment would create a road map for the evasion of the constitutionally prescribed Senate advice-and-consent role.”

The case: Maryland v. US

What the case is about: Maryland is suing the Justice Department over its decision to stop defending protections for people with preexisting conditions under the Affordable Care Act. The suit originally named former Attorney General Sessions, but now Maryland is asking the courts to block Whitaker and recognize Rosenstein, the deputy AG, as the rightful acting AG.

“The Constitution and Congress have established vitally important processes for filling high-level vacancies in the federal government,” Frosh said in a statement. “Few positions are more critical than that of US Attorney General, an office that wields enormous enforcement power and authority over the lives of all Americans.”

Maryland’s motion argues that Whitaker’s appointment violates the federal statute that governs the attorney general order of succession, which would have put Rosenstein in charge. (Justice Department lawyers have said the Vacancies Reform Act can be used in lieu of the succession order.)

The case also argues that Whitaker’s appointment, though temporary, is unconstitutional because he hasn’t faced Senate confirmation and is serving as a “principal officer.”

Who’s bringing it: Barry Michaels, a Nevada man convicted of securities fraud. He’s asking the Supreme Court to rule on the constitutionality of a firearms ban for felons.

What the case is about: Michaels is challenging a federal law that bars felons from possessing firearms. Attorneys last week filed a motion to replace Sessions’s name, which had previously been on the suit, with Whitaker’s. This is usually a noncontroversial process, but Michaels’s attorneys made it so by saying that since there were so many questions about the legitimacy of Whitaker’s appointment, the court should resolve the issue.

The motion takes up the same argument as the Maryland lawsuit (the attorneys behind the motion joined the Maryland case, too): that the federal statute governing the AG order of succession should trump the Vacancies Reform Act, and even if it doesn’t, the Appointments Clause prevents a non-Senate-confirmed person from exercising the functions of a principal officer, even if it’s temporary.

As University of Texas law professor Steve Vladeck noted at SCOTUSblog, the plaintiffs acknowledge that this case hasn’t been taken up by lower courts yet but are arguing that there’s “significant national interest in avoiding” controversy over who’s allowed to serve as acting attorney general.

Who’s bringing it: Douglas Haning, a Texas business executive who’s facing federal charges for putting substandard ingredients in pet food. The motion was filed in US federal district court in the Eastern District of Missouri.

What the case is about: Lawyers for Haning filed a motion last week that challenges to the constitutionality of Whitaker’s acting appointment. Former AG Sessions had been involved because a US attorney had to recuse himself from the case, according to Politico. With Sessions out, Whitaker steps in.

“For a federal criminal prosecution, the rule of law is profoundly important and the Department of Justice in this case is not upholding the rule of law,” Justin Gelfand, one of Haning’s lawyers, told Politico. “As a matter of federal law, the attorney general is in charge of this prosecution, but the office of attorney general is currently staffed by someone appointed in violation of Article II of the Constitution.”

What the case is about: On November 10, Trump issued an executive order barring people from seeking asylum if they cross the border illegally and outside a designated port of entry. Immigration advocates have challenged the ban, and a judge temporarily put the order on hold.

This latest case, filed in federal district court in DC, not only seeks to challenge Trump’s order but also argues that Whitaker doesn’t have the power to issue the regulations because his appointment is invalid, as it violates the federal succession statute and the Appointments Clause. One of the problems with these Whitaker motions is the challenge of standing: basically, the need to prove harm from a particular action. This asylum ban case may be one of the stronger examples of that — and a reason to pay attention to this case.

And the most meta: a Mueller challenge where Whitaker comes up

Who’s bringing it: The court asked about Whitaker in a case involving Andrew Miller, an associate of conservative political operative and Trump confidant Roger Stone, who’s under the scrutiny of special counsel Mueller. Miller, who’s represented by attorneys from a conservative nonprofit group, is challenging a grand jury subpoena. A US district court judge ruled against Miller, and now the US Court of Appeals for the District of Columbia is taking up the question.

What the case is about: This case, which predates Whitaker, is about validity of the special counsel. Miller has been trying to quash a grand jury subpoena, and he’s fighting it by saying that Mueller’s appointment is unconstitutional because — wait for it — he hasn’t gotten Senate confirmation. (This, if you’ve looked at the president’s Twitter feed, is an argument he likes.)

Mueller was appointed by Rosenstein under a Department of Justice regulation, but Miller is arguing that the special counsel’s powers mean he should be designated a “principal officer.”

A conservative legal scholar put forward this stance earlier this year, though so far it hasn’t gotten any traction in the courts. A Trump-appointed judge also shot down a similar argument brought by the Russian firm indicted for funding the troll factory that spread misinformation leading up to the 2016 election.

Attorneys argued Miller’s case in front of the DC Court of Appeals two weeks ago, but the judges asked lawyers on both sides to address what effect, if any, Whitaker’s appointment has on their cases. Both Miller’s lawyers and the government came back and said it’s really not an issue at all.

The case, however, highlights the tricky nature of these constitutional questions — and how the question of Senate confirmation, specifically, is being used by both those who want to protect and those who want to sideline the Mueller probe.