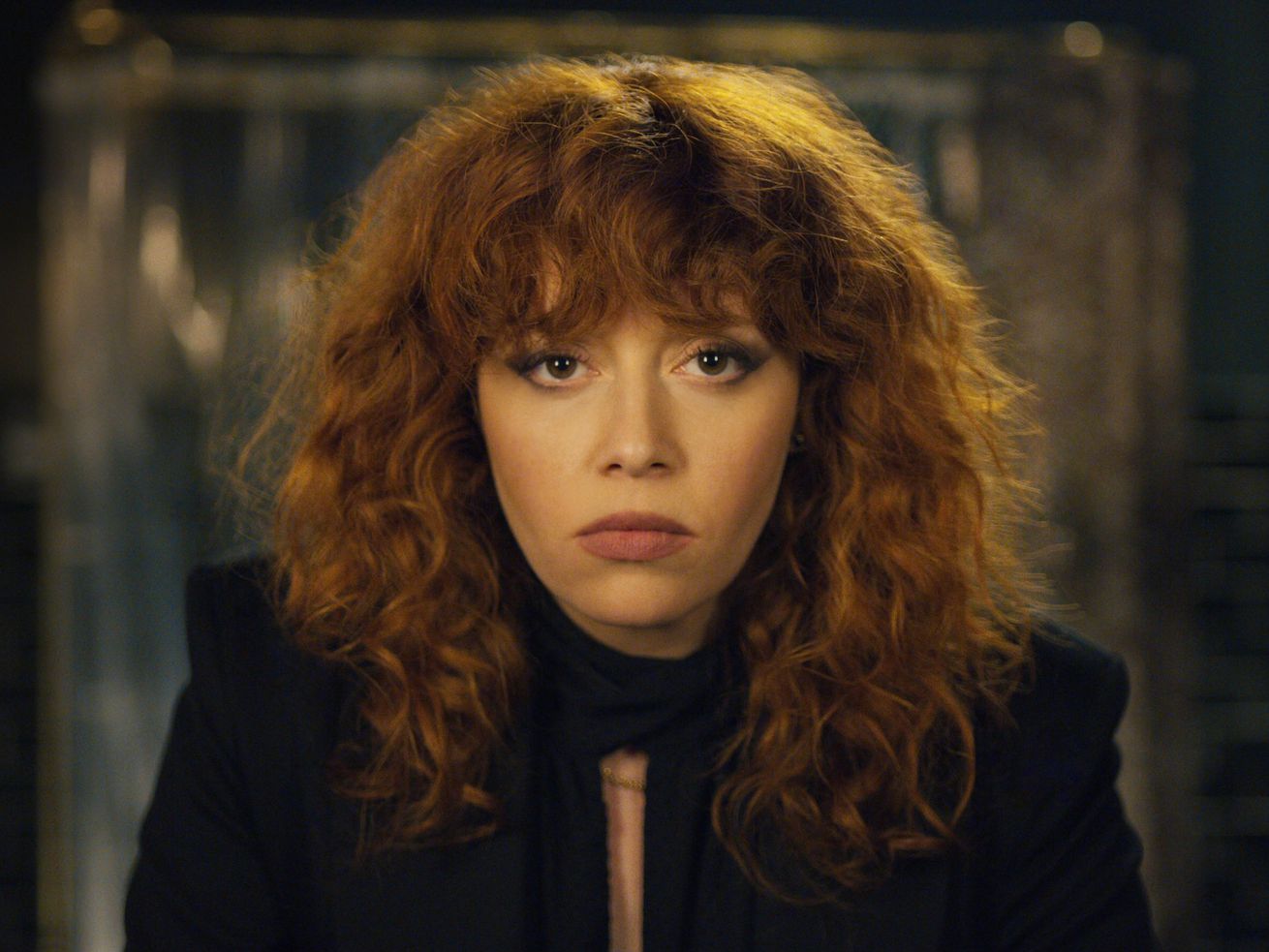 Natasha Lyonne stars. We’re not sure we should tell you anything more than that.

Natasha Lyonne is one of my favorite actors.

That’s one of my few shareable reactions to the new Netflix comedy Russian Doll, because the less you know about this terrific new series, the better. So let me just assure you that Lyonne is the star, she gets to showcase her considerable range, and her gift for wildly unconventional line readings is on full display. The series is probably too weird to win a bunch of Emmys, but God willing, Lyonne will be nominated. She’s so good.

But she does more than just play the central role of Nadia, a woman who becomes trapped by most unusual circumstances, then works to figure a way out of them. Lyonne also co-created Russian Doll (with Amy Poehler and genius indie director Leslye Headland) and wrote many of its episodes. And she directed the season finale. If you’ve been looking for an incredibly efficient Natasha Lyonne delivery vehicle (and I have) — this is the series for you!

A necessary caveat: One of Russian Doll’s executive producers — the fourth name listed in the closing credits, even — is Dave Becky, who used to be Louis C.K.’s manager and who has apologized for his role in the comedian’s cover-up of his sexual misconduct. Becky is still Poehler’s manager and one of Lyonne’s managers, and his company, 3 Arts Entertainment, is still a major force in TV comedy. This does not dampen my enthusiasm for Russian Doll or Lyonne’s performance in it, and I know Becky’s name appearing in the credits is almost certainly the result of some sort of contractual obligation. (That said, his name has been erased from the fifth and final season of Broad City.) But seeing his name did make my gut churn a bit at the end of every episode. You may feel differently!

Talking about Russian Doll requires spoiling some of the inevitable joy in discovering just what the show is, so here are three reasons to watch Russian Doll. They grow progressively more spoiler-y, so if you only want to know a little, read just the first. Got it? Let’s go.

Before watching Russian Doll, I had been more or less spoiled on the show’s basic premise: Nadia (Lyonne), a woman celebrating her 36th birthday, keeps dying, then abruptly returning to the start of her birthday party. She might make it as long as a whole day past the reset point, but she always dies again eventually.

The show reveals this almost matter-of-factly, midway through its first — 24-minute! — episode. Nadia runs out into the street without looking both ways and gets struck by a taxi. The camera pushes in on her head, bleeding out into the street. And then she’s suddenly back at the bathroom sink of her best friend Maxine’s house, with the Harry Nilsson song “Gotta Get Up” playing and someone pounding at the door to be let in, even though it’s Nadia’s dang birthday party.

So, yeah, it’s Groundhog Day, but with one key difference: The timeline doesn’t reset until Nadia dies. Sometimes she gets pretty far before she finds herself back at the sink, staring at her increasingly despairing face in the mirror. And the more loops she goes through, the more she starts to remember her past loops, which leads to a hysterically funny montage in episode two where Lyonne tries to navigate a set of stairs without falling down them and breaking her neck.

That grimly creative spin on this simple premise — gotta die to be reborn — gives Russian Doll a burst of dark comedic energy in its early going and eventually helps it zero in on more dramatic territory. Without saying too much, the series embodies the concept of the titular doll, a series of nesting layers that hide some dark, horrible core. The loop of life, death, and rebirth that Nadia is trapped in becomes symbolic of just about anything you might want it to be symbolic of, from addiction to mental illness, and Russian Doll not only makes this suggestion but does justice to its thematic implications.

Plus, just when the show is starting to run out of juice from the “Nadia dies in some bleakly comedic fashion” gambit, it starts seeding other big ideas and twists, ones that I’m loath to spoil. If you’ve seen at least half the series, though, follow me deeper still for more spoilers.

The first thing you’ll notice about Russian Doll that one might confidently identify as a successful blend of Lyonne, Poehler, and Headland’s artistic styles is the series’ comfort with having all sorts of fascinating, complicated women characters, of all ages, of all stripes, of all levels of being irritating. (Both Lyonne and Greta Lee, who plays Natasha’s friend Maxine, perfectly capture the brittle tension running through their otherwise very warm friendship every time Maxine becomes upset that Nadia is leaving her own party prematurely.)

There are men on the show, but they tend to remain on the fringes of the story — whether it’s the guy Nadia takes home from her party in the loop’s first iteration or her ex-boyfriend, a recently divorced dad named John (Yul Vazquez) who still carries a torch for Nadia, even though she no longer wants to be with him because she’s terrified of the responsibility inherent in dating a guy with a kid. Then there’s homeless man Horse (Brendan Sexton III), who seems like he might contain the secrets to the whole story.

And then you meet Alan (Charlie Barnett) at the end of episode three, in a brilliantly deployed cliffhanger, and the whole series shifts.

Alan, too, is stuck inside the loop, only he keeps resetting to his own bathroom sink, where he’s washing up to get ready to leave and take his girlfriend on vacation. He plans to propose on the trip. She’s planning to break up with him before they depart. The fourth episode is given over to replaying the events of the previous three through Alan’s eyes, and it isn’t just an experiment in point-of-view shifting — it legitimately provides a brand new way of looking at what’s happening to Nadia, too.

Alan’s presence underlines just how thoroughly Russian Doll blends Lyonne’s spiky sense of humor and mordant willingness to explore the darker corners of human nature, Poehler’s boundless energy and optimism, and Headland’s love of complicated storytelling structures and dissecting relationships. But eventually you start to realize that breaking down which elements of the show are thanks to which of its co-creators is a fool’s errand, because Poehler is just as willing to tell a dark joke, and Headland’s terrific Sleeping with Other People is one of the most beautifully optimistic rom-coms of the decade.

By introducing Alan, the three (and their writing staff) put their marker down on something darker and deeper than the black comedy that Russian Doll has been to that point, and the series takes a step inexorably toward more dramatic territory without missing a beat. Headland, who directs almost all of the season’s eight episodes, is integral to this evolution, as she deftly highlights very small visual details that show how the loop keeps changing in ways that suggest Nadia and Alan’s time is running out. Because yes, Russian Doll is interested in the nature of time itself.

This brings me to my final spoiler warning, and trust me, you should only proceed if you’ve seen all of Russian Doll (unless you are my editor, and I’m so sorry, Jen, because you’re gonna like this show).

I mentioned earlier that what’s happening to Nadia and Alan could stand in as a metaphor for mental illness or addiction, and in the season’s standout seventh episode, the loop crumbles around the two of them. First animals, then objects, then whole people disappear.

Nadia and Alan struggle to find a way to end the loop, only starting to realize that they need to first seek the emotional closure that will help them move on to the next step of their own personal recovery processes, and then must try to help each other live through the night once the loop resets one final time. (Trust me, this makes sense in the moment.)

(A necessary sidebar: Realizing that Alan played a small but memorable role in the series’ very first episode when he took center stage in episode four was one of my biggest pleasures in watching the show. I love how confident its storytelling is in the audience to keep up, and I can’t wait to revisit the show to find the many, many Easter eggs that must be scattered throughout it.)

Some critics have written this final empathy-driven gambit off as a kind of gooey kumbaya bullshit answer to the series’ deeper mysteries. Shouldn’t there be a deeper answer here than “We need to help each other out in our darkest moments”? Shouldn’t there be an explanation?

I think this misses the mark, though. What the series is is perceptive about how we can only help others after we’ve taken care of ourselves — but also how the two are so inextricably intertwined that one becomes the other. The deeper Nadia drifts into her own past, the more she confronts her horrible childhood, and the more she realizes that she’s forever marked by traumas she’s never forgiven herself for, even though she was a child, the more the series starts to zero in on its real villain: the human brain. The series mimics the slow, methodical unpeeling of layers that is talk therapy for a good reason.

Both Nadia and Alan spend much of the series doing self-destructive things, but because we’re in their points-of-view, those self-destructive behaviors seem entirely fine, justified even. (It also helps that Lyonne is so good at making seemingly terrible ideas feel like the only possible action to take.) It’s not for nothing that Nadia’s beloved aunt, who raised her, is a therapist. Only once Nadia and Alan have traveled to the heart of their own Russian doll to find the shard of painful truth buried there can they begin to heal.

But Russian Doll doesn’t bother arguing that this will “fix” either character, which is where the idea of helping others comes in. If Alan can pull Nadia out of the path of that taxi, if Nadia can stop Alan from jumping off of a building, then they’ll be there to look out for each other in the future. (Also, it’s nice that the two aren’t forced into a romance — though they do have sex.) Life is a series of loops, after all, repetitions of patterns we become comfortable with. And the very best friends we can have are those who see those loops for what they are and take our hand to make us just a little bit better.

Russian Doll is streaming on Netflix.