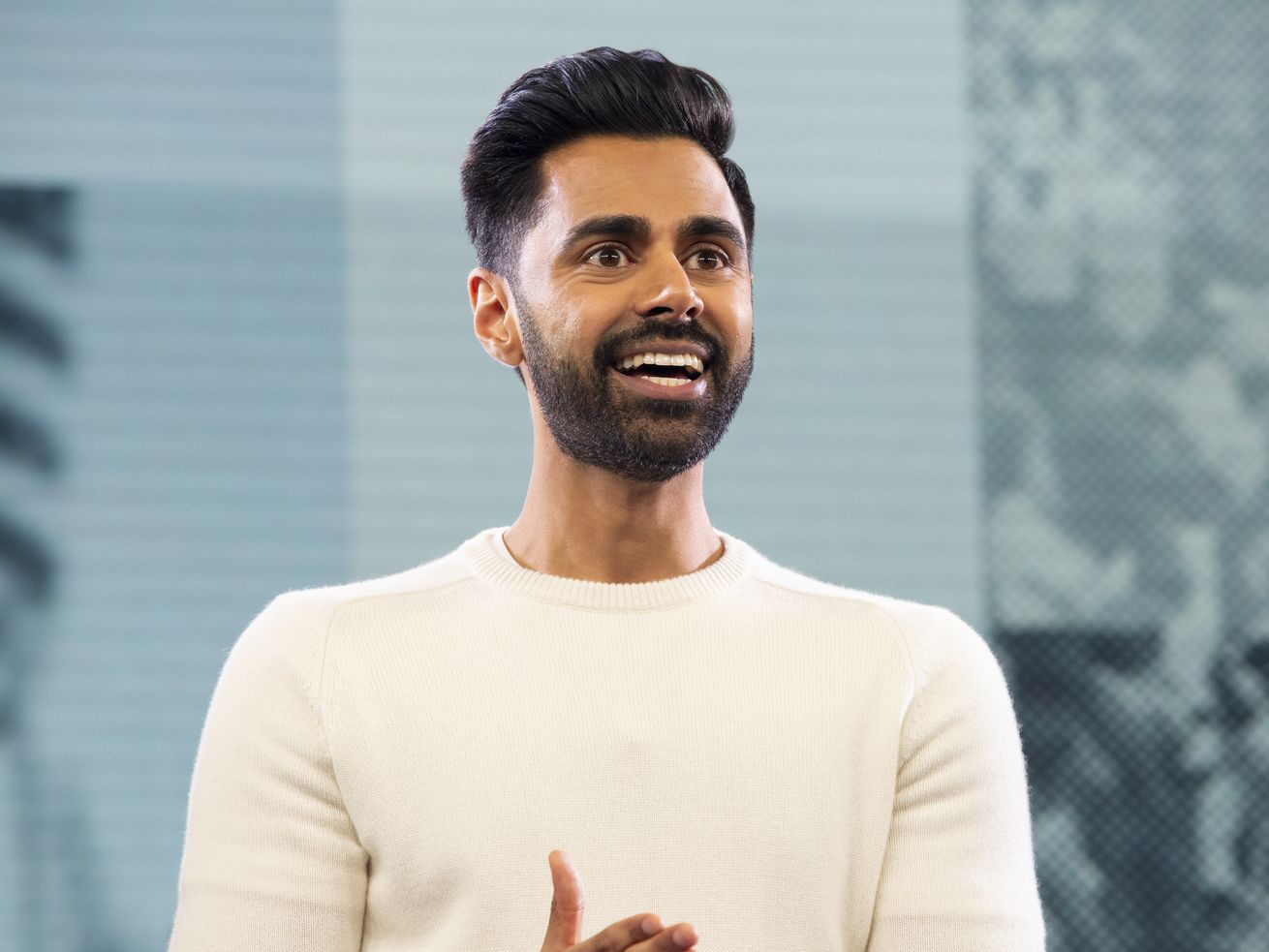 A few days before the launch of Patriot Act With Hasan Minhaj, Netflix’s latest attempt at a timely news show, the network released a 10-minute video featuring Minhaj and Queer Eye’s Tan France going shopping for an outfit that Minhaj could wear on his new program. The video’s premise and purpose were hardly novel; it was obviously meant to promote two different Netflix shows, and ever since the new Queer Eye debuted, clips of one or all of its stars giving someone a makeover have become fairly common. But it still became an instant hit, with social media lighting up with commentary.

The video’s success speaks directly to just why Minhaj’s new show is so great. It’s not that anything particularly unique happens; rather, it’s the fact that the perspectives of France and Minhaj — who are Pakistani and Indian, respectively — allow for a different kind of discussion.

Within the first minute, they’ve already covered the proper pronunciation of their names (“That’s a brown thing”) and moved on to comparing their skin tones, discussing Western versus South Asian beauty products, and jokingly referring to themselves as the “brown Illuminati.” They display a rapport and specificity that’s missing from enough media that it feels remarkable to find in a silly promotional clip. But it’s exactly that type of specificity that makes Minhaj’s new show worthy of note.

Though he’s not really doing anything that hasn’t been seen before, with Patriot Act, Minhaj has created something that feels fresh and new. Patriot Act is part talk show, part news commentary, part standup set. It’s part timely, part evergreen. And perhaps most strikingly, it seems to have a real shot at success in a streaming landscape that, by default, isn’t super friendly to a weekly news commentary show.

Patriot Act may finally give Netflix a true contender in the crowded field of newsy, funny talk shows

Netflix’s ongoing foray into the talk show/topical news field has been a mixed success at best. Over the past two years, the streaming network has launched several shows that seem to target the ever-expanding Venn diagram of news commentary and comedy, with Chelsea Handler, Joel McHale, and Michelle Wolf all trying their hand at hosting weekly series. But all three have since been canceled, after seemingly failing to resonate with viewers in the same way that other comics turned news commentators — think Last Week Tonight’s John Oliver, Full Frontal’s Samantha Bee, Late Night’s Seth Meyers, and The Daily Show’s Trevor Noah — all have.

The other talk shows that are currently airing on Netflix, like Norm Macdonald has a Show and My Next Guest Needs No Introduction With David Letterman, aren’t aiming for the same kind of timeliness, opting instead for a more traditional, less news-oriented approach. But as a result, they too have been relatively low-impact; both received lukewarm receptions upon their debut, beyond a brief controversy surrounding Macdonald’s defense of Roseanne Barr and Louis C.K. while promoting the show.

Patriot Act may just be the one to break out.

Of all of the late-night programs and talk shows currently airing on any network, from broadcast to cable to streaming, Patriot Act takes the best of each to create something that feels unique — and vital. As Minhaj takes the stage without a desk (like Bee does on Full Frontal), his show comes across more as a standup set than a talk show, and his approach of focusing on a single topic for most, if not all, of each episode (like Oliver does on Last Week Tonight) means that Patriot Act is incisive and, importantly, truly informative.

Minhaj is the first Indian-American performer to host a TV news-meets-comedy show, and the fact that he’s breaking ground becomes clear almost as soon as Patriot Act opens. The first episode is about affirmative action, and there’s a certain cosmic irony in how the topic — which inherently advocates for bringing a diverse range of voices into any given conversation, the better to reflect the world around us — is mirrored in the fact that Minhaj is the person leading the discussion.

There’s a specificity to the reference points Minhaj uses — such as a comparing a lota (a small water vessel commonly found in bathrooms in South Asian households) to toilet paper to help build a metaphor about effectiveness — that probably wouldn’t be made by any other talk show host currently on air.

He also addresses issues like anti-black sentiments in Asian immigrant communities, which is a thorny subject that’s rarely (if ever) so explicitly addressed in popular media, and he does it all without making any of his discussion topics seem like the domain of an “other.” The result is a news-comedy-talk show that feels like it can speak to a broader audience; while Minhaj is not trying to tailor what he’s saying for a white audience, he also doesn’t make his specific references inaccessible to anyone who might not immediately understand what he’s talking about. And his approach is only bolstered by Patriot Act’s focus on the wider world rather than on solely American politics.

The second episode of Patriot Act, “Saudi Arabia,” is perhaps the perfect example of how everything comes together, as Minhaj tackles the murder of journalist Jamal Khashoggi and the questionable-at-best politics of Prince Mohammed bin Salman. The episode approaches America’s relationship to Saudi Arabia from the latter country’s perspective, and Minhaj sharpens the macro into a more micro point as he explains how political turmoil within Saudi Arabia affects his faith as an Indian-American Muslim.

Through it all, Minhaj makes his stance clear, damning the crown prince’s actions as well as the role that many countries, including the US, have played in allowing him to go mostly unchecked. Impressively, the segment remains timely — and no less accurate — as of press time, though the rapidity with which news changes means that may not always be the case, a snag that Patriot Act seems to be counteracting by grounding its segments in sufficient broader historical context.

Later, in a shorter piece toward the end of the episode (that comes closest to replicating the segment-by-segment structure of a typical news show), Minhaj digs into “the Mount Rushmore of shitty Indians,” which includes political figures like far-right political commentator Dinesh D’Souza and former Louisiana Republican Gov. Bobby Jindal. Though their respective right-wing exploits have been thoroughly covered in the media, no one has ever deconstructed their personas the way Minhaj does, as he jokes that on the positive side of things, these “shitty Indians” have set Indian kids free because they set a precedent for being “complete fucking lunatics” instead of adhering to stereotypes about following the rules and studying to become doctors.

It’s also worth noting that, as yet, Patriot Act doesn’t have any bits. The comedic aspect of the show is contained within Minhaj’s delivery rather than coming from side characters or cartoonish graphics. (The graphics that do support what Minhaj is saying are all informational, in a statistic-heavy layout that brings to mind TED talks more than the complementary punchlines often seen on The Daily Show or Last Week Tonight.) Minhaj’s mission is clear: He wants to make sure we’re properly informed, but there’s no need to sacrifice accessibility or humor to get us there.

Thus, the window that Patriot Act opens into contemporary happenings feels singular, and both because of and as a result of that, it has the potential to succeed in a way that Netflix’s other talk shows haven’t. (And given the show’s 32-episode order, it would seem that Netflix is committed to giving it its best chance of doing so.) The only question seems to be how the show will handle timeliness, as the constraints of dissecting the news week to week remain a stumbling block for any show that airs on a streaming network built for bingeing.

And with the way “Saudi Arabia” still strikes home and feels relevant despite the news cycle continuing apace — a function of the episode’s smart framing of the story it’s telling within a bigger picture — Patriot Act may have cracked a difficult code. Ultimately, it may be Minhaj’s broader outlook on the news that saves the show from the timeliness trap. That, and a voice that’s too distinct to be drowned out.