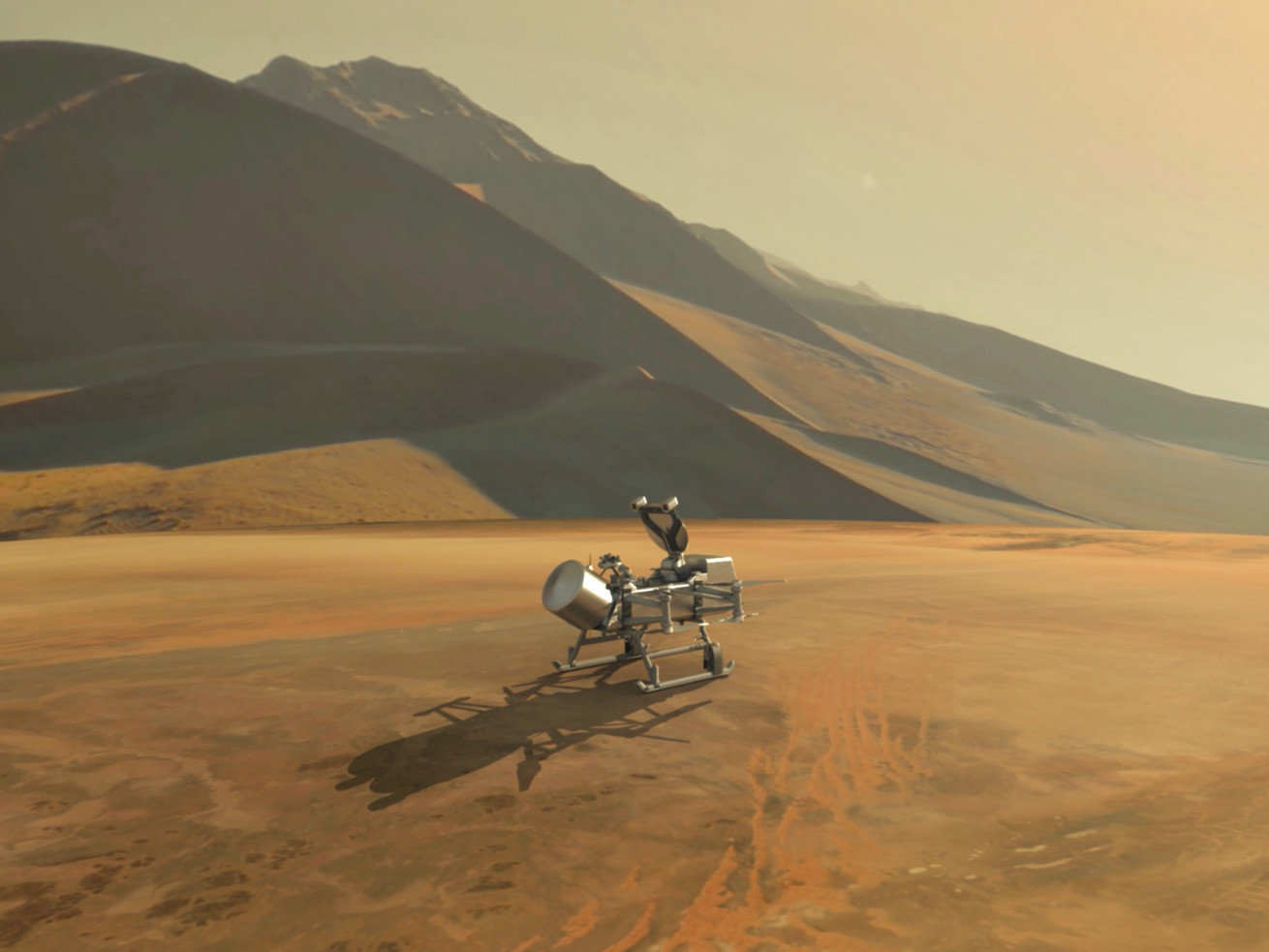 “We can’t go back in time on Earth to learn lessons about the chemistry that led to life. … But we can go to Titan.”

Titan, the largest moon of Saturn, has a lot in common with Earth. It has a thick, nitrogen-dense atmosphere and features like rivers, lakes, mountains, and, potentially, volcanoes.

In some ways, it’s like a smaller version of Earth, stuck in the time before life evolved here. It contains many of the organic compounds necessary for life. The rain that falls there isn’t water; it’s liquid methane (natural gas). Studying this world, the second-largest moon in the solar system, may give us a glimpse into how life began on our own.

On Thursday, NASA announced a new mission to explore this fascinating world with a helicopter drone. The mission, called Dragonfly, is the latest in NASA’s New Frontiers program, which has launched explorations of Pluto, Jupiter, the asteroid Bennu, and now, Titan. (Dragonfly beat out a competing mission plan to return a sample from a comet.)

Dragonfly is planned to launch in the year 2024 and arrive at Titan in 2034. When it lands, it will take off in flight on an alien world. It’s audacious.

With its eight rotors, Dragonfly will be able to fly tens of miles in a given day, powered by what’s essentially a plutonium battery. The atmosphere of Titan is four times as dense as the Earth’s and there’s less gravity, which makes it a prime location in the solar system to deploy a drone.

During a two-year mission, Dragonfly will travel hundreds of miles across the surface (which is much more than the rovers on Mars, like Curiosity, are capable of), sampling the chemistry of the moon and studying its geology and atmosphere. It will also look out for signs of life.

“We can’t go back in time on Earth to learn lessons about the chemistry that led to life,” Curt Niebur, NASA’s lead program scientist for New Frontiers, said on NASA TV, announcing the mission. “But we can go to Titan … and look at that chemistry.”

Scientists are interested in learning how organic chemicals form in Titan’s atmosphere and then float down to the surface. Again, a similar process could have occurred on Earth, generating the chemicals necessary for life to form here.

They’re also interested in studying Titan’s methane cycle. Methane (the primary ingredient in natural gas) actually forms clouds and rains down on the surface of Titan, a lot like how water rains on Earth. If we can understand how weather works on Titan, it will give us a better picture about what’s possible in the greater reaches of the cosmos, and help scientists understand what makes a planet or moon habitable or not.

Titan was discovered in 1655 by the Dutch astronomer Christiaan Huygens, but because it’s covered by such a dense, thick atmosphere, scientists never knew what lurked underneath. It wasn’t until a mission called Cassini-Huygens arrived at Saturn in 2004 and dropped a lander that we were able to appreciate the complexity of the world.

This is what the lander, Huygens, saw: a rocky landscape about a billion miles from Earth.

Dragonfly is going to get a better view, and will send back photos of its flights through Titan to Earth. We’ll be able to see what it’s like to fly on another world, to discover what rivers, mountains, and lakes look like on a world that’s not our own. Mark your calendars: 2034 will be a very exciting year for planetary exploration.