MILLIONS of vulnerable Brits will be told it is safe to venture outdoors again after ten weeks confined to their homes.

They will get the all clear after experts ruled there is now just a 1,000-to-one chance of them catching the coronavirus.

After ten weeks stuck indoors, vulnerable Brits will be allowed to go outside with members of their household[/caption]

Boris Johnson will announce today that from tomorrow 2.2million people “shielded” from the pandemic can go outside with members of their household.

The PM will also allow frail or elderly people who live alone to meet outside with one other person from another address — if they socially distance.

The move will bring new-found freedom to those with extreme medical conditions who have become prisoners in their own homes since the lockdown began.

Many have not had face-to-face contact since they were first advised to “shield” themselves.

Last night, Mr Johnson praised their extraordinary strength and thanked the volunteers who kept them going.

He said: “I want to thank everyone who has followed the shielding guidance.

“It is because of your sacrifice that thousands of lives have been saved.

“I do not underestimate just how difficult it has been for you, staying at home for the last ten weeks, and I want to pay tribute to your resilience.”

Those in the vulnerable category include organ transplant recipients, those on chemotherapy, kidney dialysis patients and those with severe respiratory conditions.

The move is the latest in a series of “baby steps” to ease the restrictions imposed on March 23.

It follows fresh clinical advice which shows the average chance of catching the virus has fallen from 40-1 to 1,000-1.

In a further relaxation of the rules, people will be able to exercise outside with up to five others from different households, starting tomorrow.

But last night a top medical expert warned it was a “dangerous moment” and advised: “Don’t tear the pants out of it.”

It means people will be able to play some team sports, go running or training together and enjoy fitness sessions.

But, as with those “shielded”, they must stay two metres apart and physical contact is out.

“We have to get this right. People need to behave responsibly.

“Don’t tear the pants out of it.

He stressed people must continue to wash their hands often and keep equipment sharing to a minimum.

Outdoor gyms, playgrounds and all swimming pools will remain closed.

But the announcement will raise fresh hopes that grassroots sport will soon return.

Sports Minister Nigel Huddleston said: “The coronavirus outbreak has demonstrated to so many of us how important exercise and fitness are.

“I am hopeful people will continue to make time for it as life gradually returns to normal.

“We are working hard to get grassroots sport running safely again, too, so that people can reunite with their own football, rugby or cricket team-mates.

“But we will only do this when it is safe.” 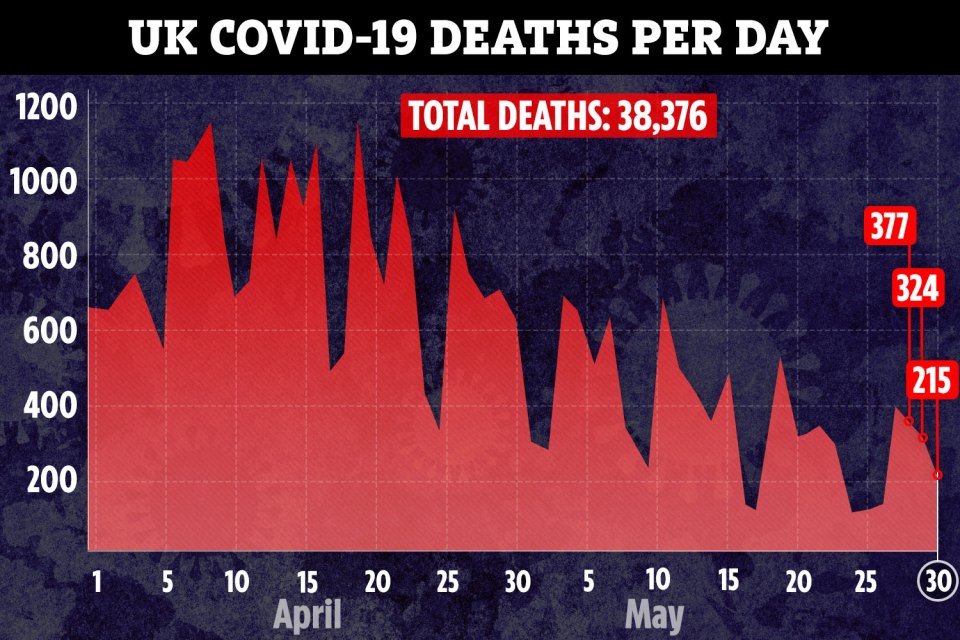 Every primary school in England is expected to reopen tomorrow in defiance of militant union leaders.

Most will have smaller class sizes than ministers want, but the return is a big boost for the Government.

It is a major coup for Education Secretary Gavin Williamson who has had to negotiate a minefield of obstacles set up by hardline leaders of the National Education Union who said a return on June 1 was “not viable”.

A poll conducted by the National Association of Head Teachers revealed nine in ten members will reopen classes.

Three in four will ignore government guidelines about which children should return, according to the survey of 2,000 heads.

NAHT leader Paul Whiteman said: “School leaders and their teams have worked tirelessly over the past two weeks to put in place arrangements to keep pupils, parents and staff as safe as possible from Monday. This is an incredible achievement.”

But five scientific advisers are still warning it is too risky to ease the lockdown.

The experts, all members of the Scientific Advisory Group on Emergencies, warned the infection rate was too high.

Prof Van-Tam said the rate will only stay below one if people continue to adhere to physical distancing and play their part in making the contact tracing system a success.