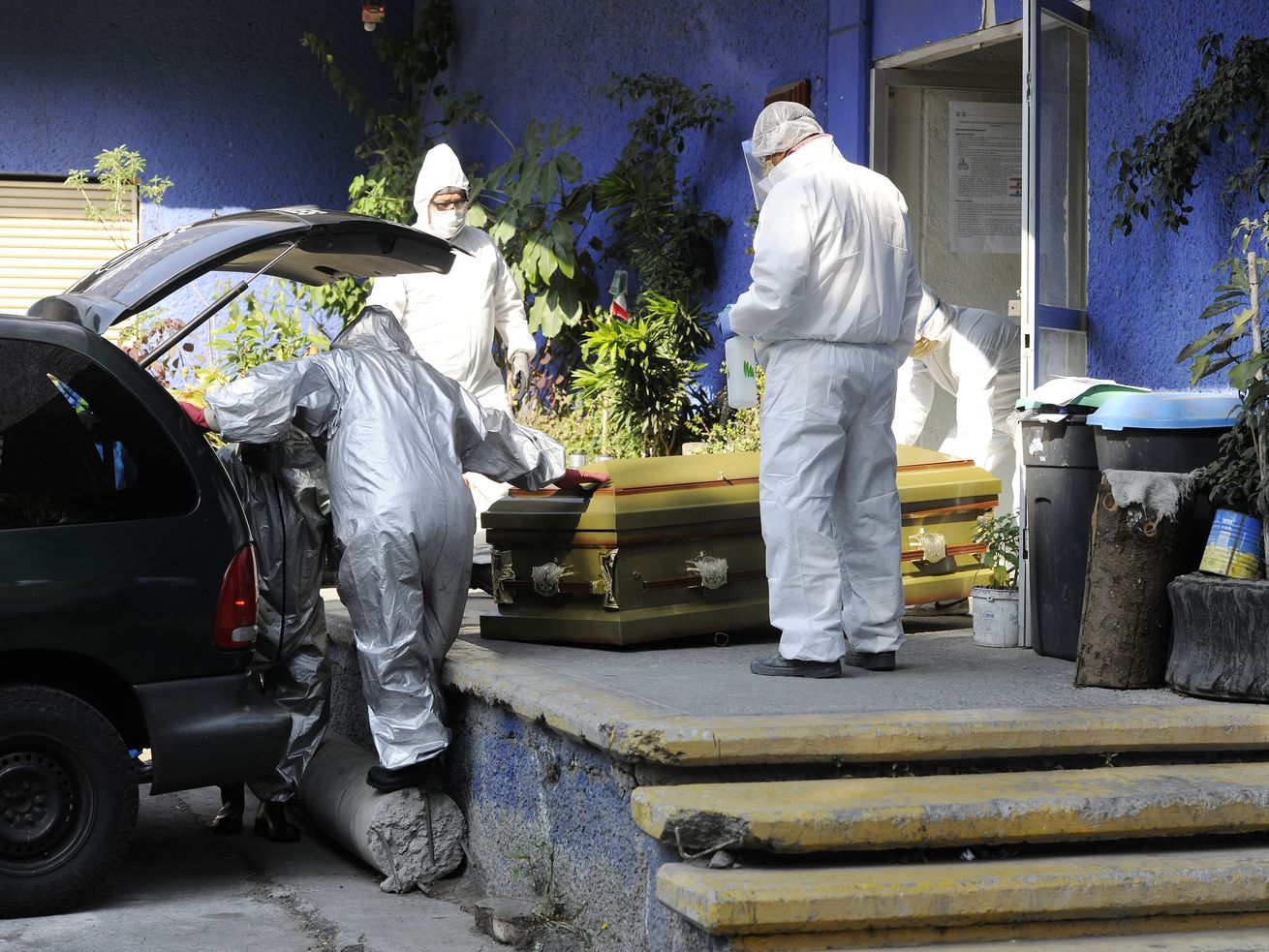 By some estimates, Mexico’s coronavirus cases are 17 times higher than officially reported.

As of May 13, Mexico reported more than 38,000 infections and nearly 4,000 deaths. Those are by no means small numbers (even if they’re leaps and bounds less than America’s). But the problem, experts say, is that the real totals are likely orders of magnitude higher. How high, though, is anyone’s guess.

“The numbers do not appear to reflect the death toll for certain,” Donna Patterson, an expert on Mexico’s health care system at Delaware State University, told me. “At the federal level, the numbers aren’t being reported accurately.”

Indeed, Mexican mayors, doctors, funeral home directors, and even former officials have said in recent weeks that they have reported death toll numbers only not to see them reflected in official federal government counts.

While the Mexican government itself has effectively acknowledged an undercount — saying it assumes the number of actual coronavirus cases is eight times higher than the numbers it has — its estimate is still far below what other experts contend.

It’s not clear if the case-counting disparity comes from inefficiency, incompetence, or deliberate obfuscation, but it’s a damning state of affairs. Some experts, like Dr. Laurie Ann Ximénez-Fyvie, the molecular genetics lab chief at the National Autonomous University of Mexico (UNAM), think the undercount might be a deliberate decision by the federal government.

“If Mexico is good at anything, it’s hiding numbers,” she told me.

Recent media investigations, including by the Wall Street Journal, the New York Times, and Spain’s El País, appear to support those claims. In fact, El País says that Mexico likely has between 620,000 and 730,000 coronavirus cases — about 17 times higher than the official count.

On top of that, Mexico also has one of the lowest testing rates among developed countries, and it doesn’t appear that it’ll increase anytime soon. Combined with the undercount, some experts say, the nation is flying blind as to the extent of its true coronavirus woes.

“The numbers are really not the problem,” Ximénez-Fyvie said. The issue is that “we don’t even know who the sick people are, and we don’t know where they are,” meaning Mexican health officials can’t identify clusters of infection that may overwhelm the nation’s health care system.

It’s also not good news for North America in general. The US has a major crisis of its own, with roughly 1.3 million cases and more than 80,000 deaths as of May 13. Having a southern neighbor with similar issues will only make the disease in both countries — and throughout Central America — harder to quash.

For those and other reasons, experts want Mexico not only to ratchet up its coronavirus response but also to come clean with its statistics. Otherwise, former Mexican Health Minister José Narro Robles tweeted last month, the government will further foment “distrust and uncertainty.”

It’s important to note that most countries are likely missing (and therefore undercounting) pandemic-caused deaths. But all it takes to realize that Mexico has a bigger problem on its hands is to listen to what local leaders are telling the media.

Jesús Roman, the mayor of Chimalhuacán, a city near the nation’s capital, told Al Jazeera on Sunday that the federal government “counted us as having 24 dead, but we had 87 — more than three times more than that.”

Mayor Maricela Serrano of the central city of Ixtapaluca also told the outlet that “up until [Saturday] night, we had 54 people die of Covid-19. … And in the daily roundups from the state and federal government, they’ve only registered 16 deaths.”

Those dealing with the bodies have been overwhelmed in recent weeks. “We are working triple what we usually do. We can’t keep up,” José Jardines, a crematorium official near Mexico City, told Al Jazeera. “Before, we cremated one to three bodies a day. Now, it’s up to 15 or 20.” Cremation centers are so overworked that staff sometimes leave bodies at hospitals for an extra day because they don’t have the space.

Even the president’s allies are aware of the problem.

Mexico City’s mayor, Claudia Sheinbaum, suspected the federal government’s data was wrong and had staff call public hospitals in the capital to get their death counts, the New York Times reported. They found that the hospitals’ numbers were about three times higher than the federal government’s. However, she has yet to lambaste President López Obrador because of their close political ties.

Despite what local political and medical leaders say, the federal government isn’t listening. And that’s only likely to make Mexico’s coronavirus recovery efforts much, much harder. “Maybe Mexico will be the textbook case of what happens when the government just did nothing,” UNAM’s Ximénez-Fyvie told me.

To understand how Mexico got into this mess, you need to understand two things: how slowly the government responded, and its current, controversial strategy.

Even as the coronavirus made its way into the country, Mexico’s president — who goes by AMLO — made repeated statements to assure the country that everything was fine.

“Live life as usual,” he said in a video posted to Facebook on March 22, six days after US President Donald Trump first debuted his “15 days to slow the spread” plan. “If you’re able and have the means to do so, continue taking your family out to eat … because that strengthens the economy,” he said in the video, seated outside at a restaurant.

In fact, he proceeded to hold political rallies, kiss supporters, and request that Mexicans go out shopping to keep the nation’s businesses humming. Only 250 cases had been reported by the end of March.

AMLO’s dithering delayed Mexico’s reaction to the growing crisis, and gave thousands of Mexicans a false sense of security. Recent Google mobility reports, which track how often people in a country roam around outside, showed that Mexicans observed social distancing measures less seriously than nations in Europe or even the US.

However, an important caveat is that nearly 60 percent of Mexicans work in the “informal economy” as street chefs, artists, construction workers, and the like. Their livelihoods depend on working outside to sell their goods and services. Without doing so, their ability to purchase food and necessities for themselves and their families becomes near impossible.

Without a major intervention from AMLO and his government, then, a major coronavirus spread was going to be the likely outcome.

The government did, eventually, start to counter the disease in March. But as Ximénez-Fyvie told me, the three phases of Mexico’s initially promising coronavirus strategy quickly faltered.

The government’s “Phase 1” plan, she said, was to test imported cases of coronavirus and track their contacts. That made sense as a start, she said, as the only way the disease was likely to get into the country was from abroad. In her mind, Mexico’s government responded appropriately and well.

But the strategy broke down in “Phase 2.” Using the Sentinel surveillance program at more than 250 labs around Mexico, the government could track local transmissions of Covid-19. This system, which is also used in the US and Canada, allowed health officials to estimate the number of coronavirus cases in the country.

That’s all well and good, but the problem is the government had no idea who, exactly, these people were, if they were symptomatic, or if they were isolating. The only way to do that would be not just to estimate the number of cases, but to confirm them with a widespread testing and tracing program. But since Mexico had (and still has) the lowest testing rate per 1,000 people among developed nations, its ability to figure any of that out was next to impossible.

So the government started to guess what the scope of the outbreak really was. On April 8, Hugo López-Gatell Ramírez, Mexico’s Covid-19 response chief, told CNN he and his team would multiply the total of confirmed, tested coronavirus cases by eight. He said he arrived at that number because the estimates from the Sentinel program were eight times higher than the confirmed infections total.

Such a back-of-the-envelope calculation, experts say, isn’t typical for governments, though all countries must do some educated guesswork during a pandemic. What’s more, Ximénez-Fyvie told me, López-Gatell’s own numbers from March and April show that Sentinel estimates were about 24 to 31 times higher than the tested, confirmed cases.

López-Gatell has yet to amend his government’s estimation plan. In fact, he’s defended the unknown spread in Mexico because he claims it will lead the country toward a herd immunity against the disease faster.

“How many [cases] are there? A lot, a lot. Hundreds of thousands,” he said during a May 7 press conference. “If only it were millions, because that’s what would stop the epidemic: to have a lot of infected people.”

Importantly, however, the science is still not clear if a country can achieve herd immunity from the coronavirus, and any attempts to achieve such a status puts the most vulnerable people in danger.

The situation is likely to get worse now that Mexico has been in “Phase 3” of its coronavirus plan since late April. The goal is to prevent hospitals from getting overrun with sick patients and no longer emphasize tracking the estimated number of cases through the Sentinel program.

There’s a good reason for this focus: Mexico’s health care system is in poor shape. It has about 1.4 hospital beds per 1,000 people, according to the Organization for Economic Cooperation and Development, just over 2,000 ventilators in the entire country, and few coronavirus tests.

But on its own, boosting health care would be a major undertaking for Mexico. AMLO has severely cut the health care sector in an effort to control government spending. In 2019, for example, around 10,000 health professionals were laid off due to a 44 percent cut to a public health and welfare agency. That’s led to delays in surgeries for children, reductions in staff, and cancellations of many forms of treatments for patients.

The bigger issue, though, is that prioritizing hospital capacity won’t do anything to stop the spread of infection, which has been poorly tracked and may end up overwhelming medical facilities in the long term.

“It’s like your house was flooded because you left your faucet on, and you decided to solve the problem by grabbing a bucket to scoop the water out. The house will continue to flood until you turn the faucet off,” said Ximénez-Fyvie.