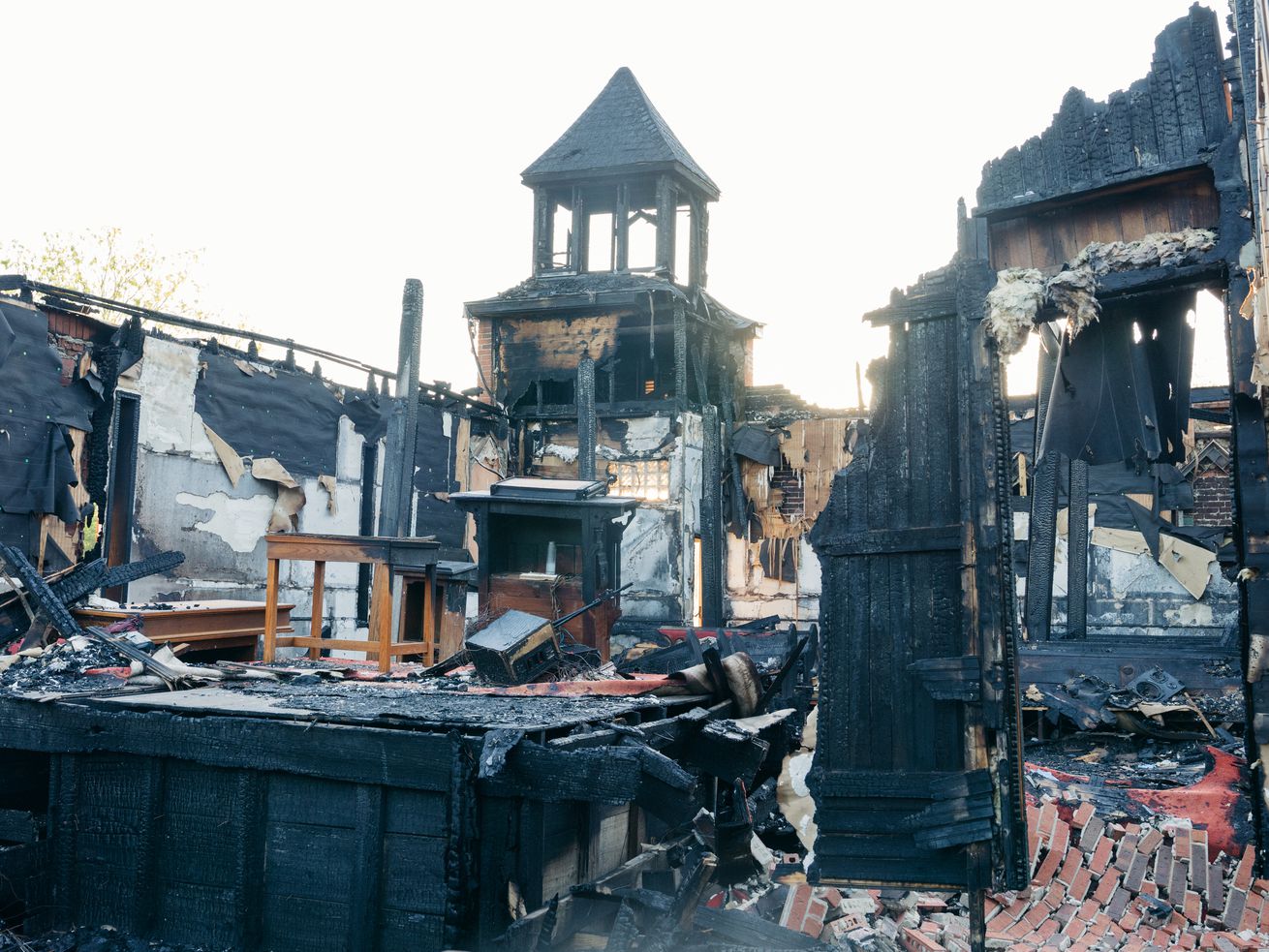 The federal charges against Holden James Matthews come two months after the churches received more than $2 million in donations.

In April, a fundraising effort to support three historically black Louisiana churches that were burned down by arsonists made national headlines when it received more than $1.9 million in donations in the span of a week.

Now, two months later, the man believed to be behind the arson attacks has been formally charged with federal hate crimes.

The Justice Department announced on Wednesday that 21-year-old Holden James Matthews — a white man and the son of a sheriff’s deputy in Opelousas, Louisiana — has been indicted by a federal grand jury. Matthews, who local authorities said “demonstrated the characteristics of a pathological fire setter” when he was arrested in April, also faces state arson and hate crimes charges.

In a press release announcing the June 6 indictment, DOJ argued that Matthews “was motivated to set the fires because of the religious character of these properties.” The agency notes that he faces six charges, three counts of “using fire to commit a felony” and three counts of intentionally damaging religious property. The latter qualifies as a hate crime under the Church Arson Prevention Act.

“Our freedom to safely congregate in these churches and exercise our religious beliefs must be jealously guarded,” US Attorney David C. Joseph said in the Wednesday statement. “Today we are one step closer to justice for the parishioners of these churches and the St. Landry Parish communities affected by these acts.”

If convicted, Matthews could face a maximum of 20 years in prison for each count of damaging religious property, as well as a minimum of 10 years on the first count of using fire to commit a felony, and 20 years for the final two counts. He could also be subjected to supervised release or fines.

The three churches, all of which were located in Louisiana’s St. Landry Parish and were home to predominantly or exclusively black congregations, were intentionally burned over a 10-day span in late March and early April, according to local officials. The first fire occurred on March 26 at St. Mary Baptist Church. On April 2, Greater Union Baptist was burned. Two days later, flames destroyed Mount Pleasant Baptist Church. The fires were investigated by local authorities with the assistance of the FBI and the Bureau of Alcohol, Tobacco, Firearms, and Explosives (ATF).

A GoFundMe effort to help the churches rebuild was created on April 10, but the page didn’t receive a massive amount of donations until April 16, one day after a massive fire damaged parts of the historic Notre Dame Cathedral in Paris. The cathedral quickly saw a wave of international financial support, with three of France’s richest families pledging to donate more than $500 million to efforts to rebuild the cathedral and the Trump administration also promising to provide aid.

With efforts to support the Notre Dame Cathedral drawing massive sums, activists, journalists, and politicians took to social media in the US to note that as the fundraising effort continued, people should also pay attention to the Louisiana churches, which were left reeling by arson and had been struggling to reach their donation goal. The message was further amplified by figures like former secretary of state and former first lady Hillary Clinton, journalist Yashar Ali, and retired NFL player Benjamin Watson.

“It is imperative that we show this community and the entire country that these types of acts do not represent who we are,” Watson, who was active in fundraising efforts when they began, tweeted on April 15.

The rebuild of Notre Dame will be well funded.

In the past month, three historically black churches in Louisiana were destroyed by a racist arsonist. He has been charged with hate crimes, but these churches need your help. Please join me in donating https://t.co/gj1BcNsGpu

The GoFundMe fundraiser was hosted by the Seventh District Baptist Association, a group of 60 churches active in southwest Louisiana, and was also supported by Louisiana Gov. John Bel Edwards and the pastors of the three burned churches. The fundraiser noted that all the money raised “will be disbursed equally among all three churches for not only rebuilding their sanctuaries, but for the purchase of all necessities lost in the fires, including pews, sound system, musical instruments, etc.”

After the Louisiana church fires, “all you see is charcoal”

When the church burnings first came to national attention in early April, the fires were quickly compared to a long history of attacks on black churches in the US, including the 1963 16th Street Baptist Church bombing in Birmingham, Alabama, the wave of fires at 145 black churches across the US from 1995 to 1996, and the 2015 mass shooting of black worshippers at Emanuel African Methodist Episcopal Church in Charleston, South Carolina. In the wake of the Charleston shooting, several fires at black churches across the country fueled concerns of a wave of arson targeting black houses of worship.

“For decades, African-American churches have served as the epicenter of survival and a symbol of hope for many in the African-American community,” NAACP President Derrick Johnson noted in an April 8 statement. “As a consequence, these houses of faith have historically been targets of violence.”

In Louisiana, authorities initially avoided suggesting that the three fires were racially motivated. Congregants noted that the fires had claimed decades of history, reducing Bibles, century-old financial records and documents, and handwritten sermons to ash.

“All you see is charcoal,” Freddie Jack, president of the Seventh District Baptist Association, told the New York Times. “It’s a total, complete loss at all three sites.”

Even with the surge in funding, the churches face a long road ahead as their congregations begin the process of rebuilding. The Times notes that while each church had insurance, the coverage is limited and will not cover all the costs. Jack added that the churches will also need to be built to fit standards passed after Hurricane Katrina, requirements that will likely increase the costs of the rebuilding efforts.

Members of the Louisiana churches say that they are prepared to move forward, that the fires have not shaken their faith, and that they are thankful for the outpouring of support. “It’s going to help our community,” Rev. Gerald Toussaint, pastor of Mount Pleasant Baptist Church, told CNN. “What the devil meant for bad, God’s going to turn it into something good.”