LOVE Island will air its steamiest episode yet tomorrow night when Curtis Pritchard and Amy Hart are seen spending the night together in the hideaway.

After seeing a teaser clip, fans are convinced Curtis will get to enjoy his favourite sex position The Eagle with love interest Amy.

It’s after the ballroom dancer shocked viewers by confessing what he enjoys doing most in the bedroom.

One joked: “Curtis and Amy in the hideaway… The eagle is coming out
#loveisland.”

Another added: “Curtis and Amy in the hideaway tomorrow, will we see what Curtis means by the eagle position? Maybe, maybe not, it is what it is #loveisland #loveisland2019.”

Someone else said: “Has The Eagle just landed in the hideaway? #LoveIsland #loveislandpodcast.”

For the first time this series, a couple will leave the main bedroom to spend some quality time together alone in a private bedroom.

Tomorrow night will see Curtis and Amy given the chance for a night away from their fellow Love Islanders.

They are seen snogging in the hot tub before getting cosy under the covers together.

It’s not known whether they have entered the Doing Bits Society – as coined in last year’s show – or are still planning on taking it slow.

Either that or he’s been able to try out the eagle sex position with Amy, where one partner lies on their back with their legs spread apart, or spreadeagle.

This variation is said to be better for stimulating the G-spot and the prostate gland and is sometimes called the peace sign position. 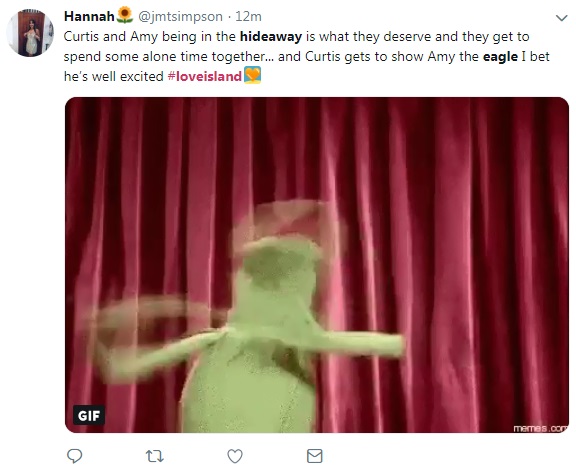 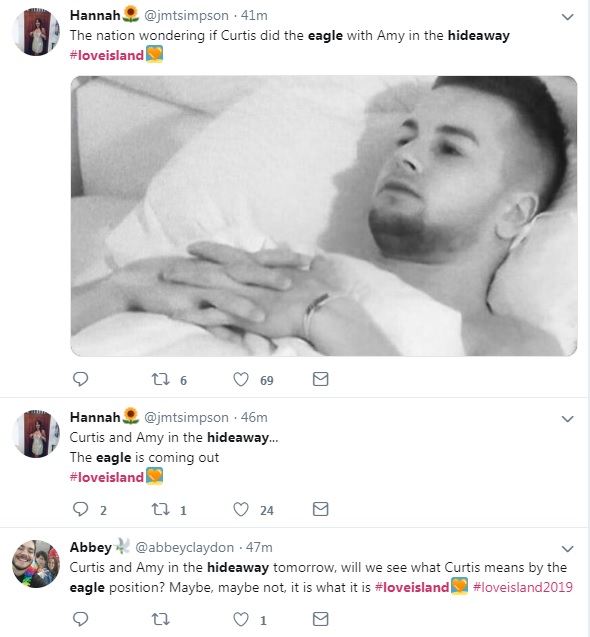 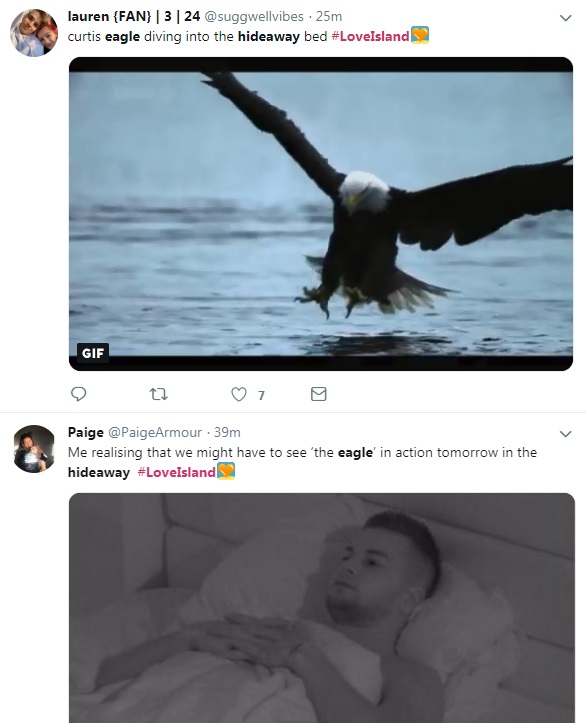 Meanwhile Michael and Amber finally share a kiss after going on a date with new boy Tommy made her realise she has feelings for the firefighter.

Despite being coupled up with Anton, feisty Geordie Amber has been hesitant to let herself go in the villa.

The 21-year-old rates herself as a ten out of ten when it comes to looks – and has found it difficult finding someone to catch her eye.

But after growing closer to Michael over the last few days, Amber shares a smooch with the 27-year-old outside on the sofa bed.

We pay for videos too. Click here to upload yours.