LOVE Island fans have flooded Ofcom with more than 1,300 complaints over fears about Lucie’s well-being.

Viewers today begged bosses to pull her out of the villa after watching her break down in tears when Joe was dumped from the island.

The number of complaints about surfer Lucie doubled overnight, reaching almost as many made about Maura’s “sexual harassment” of Tommy.

The first reached 684 after Lucie was left miserable about “controlling” Joe being sent home.

Meanwhile 686 furious fans called up the TV watchdog to moan about Maura’s behaviour on the ITV2 reality show.

An Ofcom spokesman told The Sun Online: “We will assess these complaints against our broadcasting rules, but are yet to decide whether or not to investigate.”

The complaints began when Lucie cried during Sunday night’s show after Joe, 22, told her off for talking to boys in the villa.

He said: “I’m not happy with it. It’s strange. I think it’s time for you to get close with the girls.”

Joe then told some of his male pals in the villa: “I hope today is the day she woke up and she will change.”

Joe has been accused of ‘gaslighting’ Lucie[/caption]

Some fans accused Joe of being “emotionally abusive” with Lucie – and begged bosses to remove her for own mental health.

One said: “They should remove that Girl #Lucie as quick as possible!!That baby girl ain’t ok she will mentally break down…REMOVE HER #loveisland.”

Another added: “Lucie could have a breakdown from this. My heart goes out to her. She clearly doesn’t have the strength to stay. 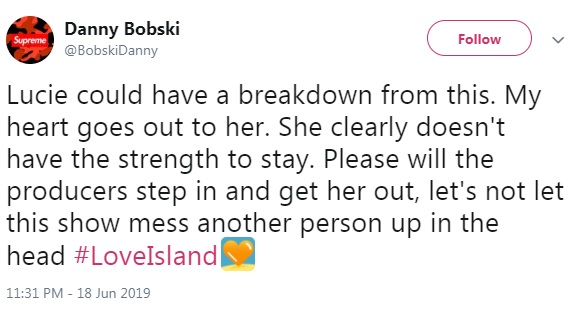 “Please will the producers step in and get her out, let’s not let this show mess another person up in the head #LoveIsland.”

Someone else said: “Lucie is so fragile! They need to remove her #LoveIsland.”

Another angry viewer said: “When will producers of reality tv realise that emotional torment is NOT entertainment? Lucie and Joe need protecting. Urgently. #LoveIsland.”

Domestic violence charity Women’s Aid blasted Joe over his actions, which he later apologised for.

Spokesman Adina Claire said: “Controlling behaviour is never acceptable, and with Love Island viewers complaining to Ofcom in record numbers about Joe’s possessive behaviour towards Lucie, more people are becoming aware of this and want to challenge it.

“Abusive relationships often start off with subtle signs of control, so it’s important that it is recognised at an early stage.