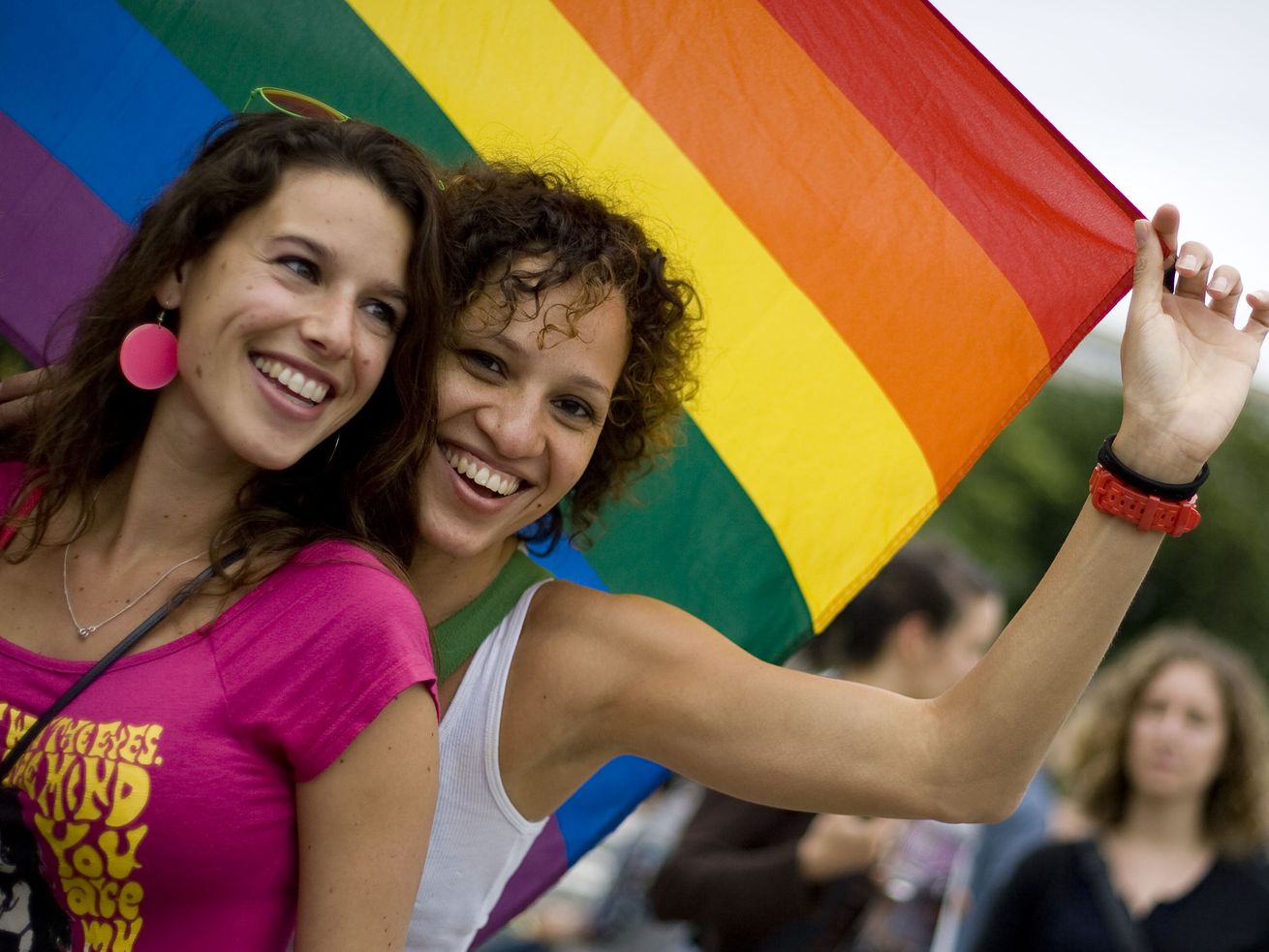 A month of celebration, protest, and political activism.

Get ready for the rainbows. June is LGBTQ Pride Month, which means Americans around the country should expect some colorful marches throughout the month as people make a stand for equality.

In recent years, the month has been marked by celebration — over the US Supreme Court’s decision to legalize same-sex marriage nationwide, as well as some of the other progress made in LGBTQ rights in broader American politics and culture.

This year, Pride celebrations fall in a markedly different atmosphere. Although LGBTQ advocates have seen big gains in recent years, the election of President Donald Trump and recent policy efforts against LGBTQ rights — from Trump’s ban on transgender people serving in the military to anti-transgender bathroom bills in North Carolina and Texas — have shown just how fragile these gains can be.

The less friendly political climate, however, is in line with the original Pride marches, which were often protests — not celebrations — in response to the violence and brutality that LGBTQ people faced at the hands of their fellow Americans, police, and the government. It speaks to the mixed nature of LGBTQ Pride Month: It’s a time to celebrate a person’s true identity, but it’s also a time to stake some ground in the ongoing political and cultural battles for equality.

The first march came at a time when Americans were considerably less accepting of LGBTQ people. Back in the 1970s, Gallup found Americans were evenly split on whether homosexuality should be legal in the first place.

That first march, back when the events were known as Gay Pride Marches, took place in New York City in 1970 in commemoration of the Stonewall Riots.

Through the 1960s, it was fairly common for police to raid gay- and trans-friendly bars. But in June 1969, LGBTQ patrons at the Stonewall Inn in New York City decided they had enough and refused to cooperate with police. When police tried to arrest and mistreated the bar’s customers and employees (including trans women of color), four nights of rioting commenced. Police and protesters were injured, and dozens were arrested.

“Police brutality (particularly NYPD raids of gay bars, nightclubs, and bathhouses) had been documented in New York City since the beginning of the century,” Kevin Nadal, executive director at the Center for Lesbian and Gay Studies, previously wrote in an email. “So, by 1969, LGBT people were quite fed up with this unfairness and decided to fight back.”

Fred Sargeant, one of the original organizers of the march, recalled his experiences in the Village Voice. The idea, Sargeant explained, was to commemorate the Stonewall Riots and move away from a conservatism that had mired LGBTQ organizations, such as the Mattachine Societies, that led the movement at the time.

“Before Stonewall, gay leaders had primarily promoted silent vigils and polite pickets, such as the ‘Annual Reminder’ in Philadelphia,” Sargeant wrote. “Since 1965, a small, polite group of gays and lesbians had been picketing outside Liberty Hall. The walk would occur in silence. Required dress on men was jackets and ties; for women, only dresses. We were supposed to be unthreatening.”

Sargeant pointed to one particular situation that inspired him and his partner, Craig Rodwell, to do away with the careful approach: “When Craig returned from Philadelphia [from the 1969 Reminder], he was blistering over an incident: Washington Mattachine’s Frank Kameny told two women holding hands that there would be ‘none of that’ and broke them apart. This physical act confirmed for Craig that we needed something much bigger and bolder than the Mattachine Society.”

Breaking through that conservatism, however, proved to be difficult. The Christopher Street Liberation Day Umbrella Committee had to negotiate with a dozen small LGBTQ organizations to give everyone a seat at the table, and the committee had to leverage the mailing list Sargeant and Rodwell had built up after they opened one of the nation’s first gay bookstores.

Sargeant recalled the first march as much more of a protest than a celebration. There were thousands of people, but there were no floats, music, or scantily dressed men. Marchers instead carried signs, chanted, and waved to reportedly surprised onlookers.

Nadal said the first march showed society that LGBTQ communities existed and included family members, friends, and neighbors. And it helped encourage other members of the LGBTQ communities to come out and be proud of who they are.

The knowledge and outrage of the Stonewall Riots gave LGBTQ advocates the momentum necessary to turn their cause into a true nationwide movement.

“Before Pride and Stonewall, there really wasn’t a comprehensive LGBT movement,” Nadal wrote. “Stonewall really was the first time that demonstrated that protesting and rioting and fighting back actually worked for the LGBT community.”

Indiana University sociologists Elizabeth Armstrong and Suzanna Crage explained that the reaction to the police raid at Stonewall Inn — the riots — resonated with LGBTQ people. After centuries of oppression, they understood why people would feel the need to react violently to yet another sign of discrimination and oppression. The Stonewall Riots, in other words, came at an exact moment in which social dissatisfaction and other political elements converged to push forward a larger LGBTQ movement.

It took just a few years for the movement to spread across the country. On the same year of the first Pride March in New York City, marches also took place in Los Angeles and Chicago. The next year, Dallas, Boston, Milwaukee, and San Jose took part. By 1972, participating locations included Ann Arbor, Atlanta, Buffalo, Detroit, the District of Columbia, Miami, and Philadelphia.

As Kameny later described, “By the time of Stonewall, we had 50 to 60 gay groups in the country. A year later there was at least 1500. By two years later, to the extent that a count could be made, it was 2500.”

Since then, the LGBTQ movement has grown even further. At first, LGBTQ Pride was typically celebrated on the last Sunday of June as Gay Pride Day or Christopher Street Gay Liberation Day. Over time, that day grew to a month of events for all LGBTQ people.

LGBTQ Pride Month is now a mix of celebration, protest, and political activism

LGBTQ Pride Marches in the US have become much more celebratory in nature over the decades, with more attendees, participants, and organizations taking part each year in the events.

There’s good reason for the positive outlook: While Americans were divided on the legality of homosexuality in the 1970s, a solid majority now support same-sex marriages, and marriage equality is legal across the US following a 2015 Supreme Court decision.

Those victories, however, have been met with a backlash in recent years. In 2016, North Carolina passed an anti-LGBTQ law that banned transgender people from using the bathroom that aligns with their gender identity and prohibited local ordinances that protect LGBTQ people from discrimination — a law that was only partially repealed after the state’s Republican governor was voted out of office later in the year. Several states, including Texas, have proposed, but not passed, similar measures.

The 2016 election of Trump and a Republican-dominated Congress also highlighted the potential dangers that a mere change in government can present for LGBTQ rights. The Trump administration has taken all kinds of anti-LGBTQ — and particularly anti-trans — actions, from trying to ban trans people from the military to rescinding Obama-era memos that protected trans workers and students from discrimination.

But the political activism of Pride isn’t just about Trump. Even before Trump, the US has by and large turned a blind eye to discrimination against LGBTQ people: It’s not explicitly illegal in most states to discriminate against LGBTQ people in the workplace, housing, public accommodations, and schools. This means that a person can be fired from a job, evicted from a home, kicked out of a business, or denied the correct bathroom facility just because an employer, landlord, business owner, or school principal doesn’t approve of the person’s sexual orientation or gender identity.

There are other issues as well, including LGBTQ youth homelessness, hate crimes, health issues like HIV/AIDS and Syphilis, the unique problems LGBTQ people face in the criminal justice system, and more.

“We don’t have full equality throughout the nation,” Jim Williams, who worked with New York City Pride, previously told me. “Although we’re very pleased with the progress that’s been made, there’s still a lot of work to be done.”

Pride Month highlights these issues by giving advocates a chance to rally supporters. The Pride Run, for instance, each year raises funds for a different LGBTQ organization. This year, contributions are going to New York City’s Lesbian, Gay, Bisexual & Transgender Community Center, which offers a wide variety of services to LGBTQ people. In the past, the run supported the Anti-Violence Project, Broadway Cares / Equity Fights AIDS, the It Gets Better Project, the Ali Forney Center, and Immigration Equality, among others.

In New York City, there are also huge historical overtones going back to the Stonewall Riots. New York City Pride, after all, arguably represents the birthplace of the world’s modern LGBTQ rights movement.

The celebration of LGBTQ Pride has also spread to many more events than just a march. New York City’s Pride group, for instance, plans to host a public rally, a brunch, and a family movie night.

Participants “need an opportunity and a place to celebrate, to play, to feel comfortable, to dress how they want to dress, to march with their friends,” Williams said. “There’s something very empowering about walking down New York City streets with crowds of people cheering you on.”

LGBTQ Pride Marches are also international, including in countries where the public remains much less supportive of LGBTQ people. In those places, the marches still act as one of the very few ways advocates can show their solidarity and support.