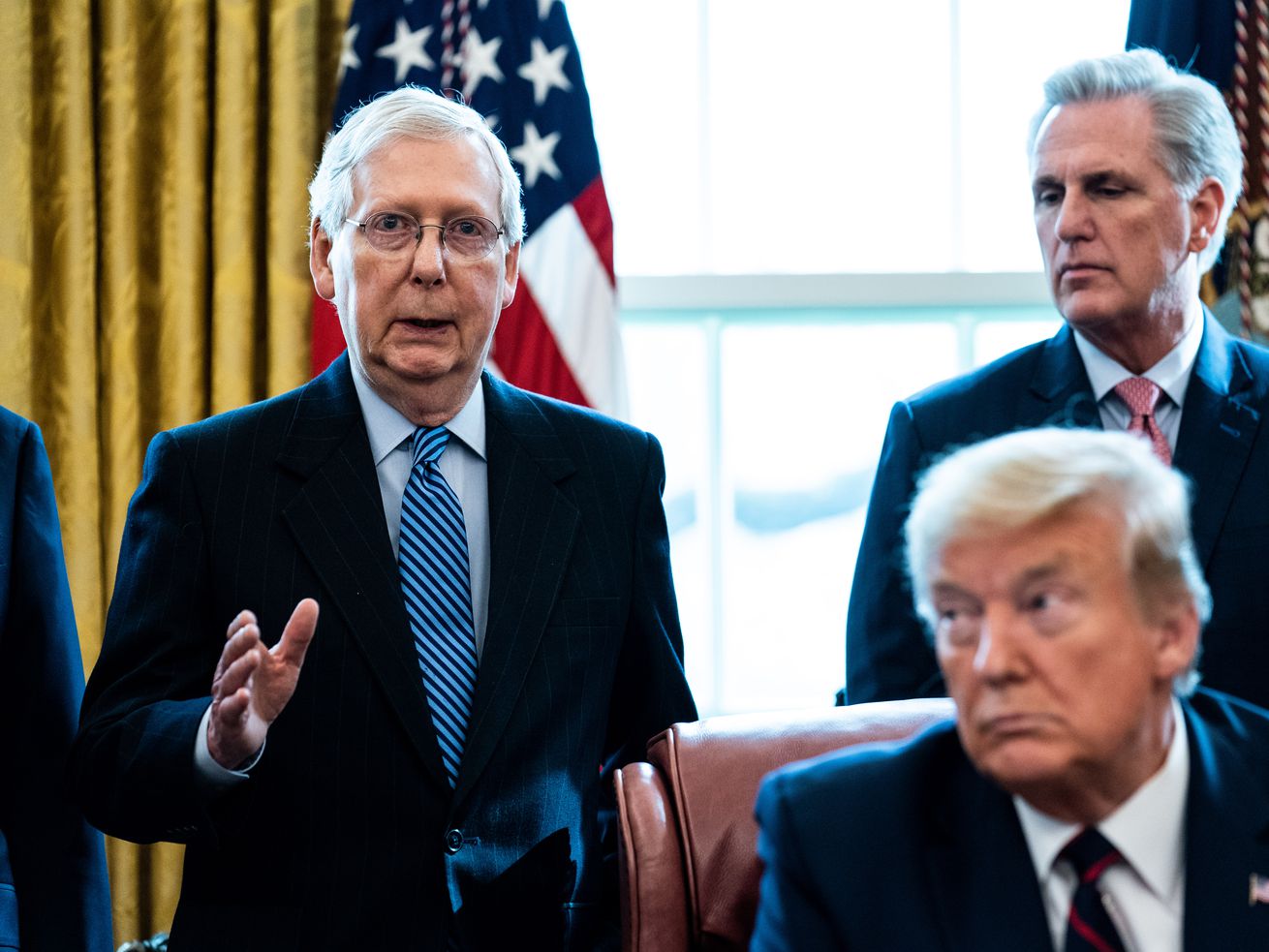 Democrats, meanwhile, are wondering why a judicial nominee is even on the docket when lawmakers haven’t approved more stimulus.

Even during the coronavirus pandemic, Mitch McConnell is laser-focused on one of his top priorities: advancing judges.

The Senate returns to the Hill this week following a month-long recess, despite concerns from the Capitol physician about testing shortages and coronavirus spread in DC. While the coronavirus stimulus is a major reason for lawmakers’ return, the current legislative agenda also includes a slate of unrelated priorities, including the confirmation hearing for a DC Circuit Court nominee.

Confirming judges, after all, is a major goal McConnell has had since the start of President Donald Trump’s term — and it’s one that clearly hasn’t changed despite the ongoing global public health crisis.

“My motto for the year is ‘leave no vacancy behind,’” McConnell said during an April appearance on The Hugh Hewitt Show. “That hasn’t changed. The pandemic will not prevent us from achieving that goal.”

This emphasis is emblematic of McConnell’s approach to the judiciary throughout Trump’s tenure thus far: Armed with a Republican majority in the Senate and the ability to blow up longstanding rules of the upper chamber — such as the amount of time required for debate on each nominee — the Kentucky lawmaker has helped shepherd through judges in rapid succession.

The implications of McConnell’s push to remake the federal judiciary are far-reaching: Many of Trump’s judicial nominees are white, male, and relatively young — and once approved, they’re set for lifetime appointments on the bench.

McConnell’s decision to move forward with judicial nominees this week — including an expected Senate Judiciary hearing on DC Circuit Court nominee Justin Walker — is the latest indication of how committed he is to this effort.

Walker’s hearing is far from the only thing on this week’s agenda. Also scheduled are hearings to examine the Covid-19 testing response and the coronavirus’s impact on the aviation industry, though no hearings or votes focused explicitly on the next wave of stimulus are currently scheduled.

Still, the fact that a judicial nominee is even on the docket, when the Senate’s full focus could be on coronavirus, has raised Democratic ire.

“Senator McConnell ought to focus the Senate’s work on the crises caused by COVID-19, not right-wing judges or fulfilling his ‘pre-existing partisan wish-list’ of protecting big business from any harm done to the American people,” Senate Minority Leader Chuck Schumer (D-NY) said in a statement last week.

A Senate Judiciary confirmation hearing is just one of several items laid out in McConnell’s Senate agenda — and it’s notable that lawmakers will be focused on this issue at all given the current pandemic.

As NBC News reported, a committee hearing this week is expected to center on the confirmation of Walker — a Kentucky district court judge who previously clerked for Supreme Court Justice Brett Kavanaugh — to the DC Circuit. It’s a move that’s garnered pushback from leading Democrats, including the ranking members of top committees, who’ve questioned why hearings unrelated to the coronavirus need to happen right now.

“Pursuant to your decision to convene the Senate during the week of May 4th, despite the public health emergency in Washington, D.C., we respectfully urge you to have the Senate focus on COVID-19 related matters and oversight of all COVID-related legislation enacted by Congress,” the ranking members wrote in an April 28 letter to McConnell.

Walker — who was deemed “not qualified” for the District Court judgeship by the American Bar Association last year — would be taking up one of two remaining Circuit Court vacancies if he’s confirmed, NBC News noted.

Additionally, the Health and Education Committee will hold a hearing with the director of the National Institutes of Health to examine the state of Covid-19 testing in the US; the Commerce Committee is scheduled to speak with airline industry representatives about the economic effects of coronavirus.

Concerns about the consideration of judicial nominees in this moment hasn’t been limited to Democrats. According to the New York Times, Sen. Lisa Murkowski (R-AK) raised this very issue during a recent GOP conference call. “As much as judges are important, what people want us to be focused on is Covid,” she said.

The next steps forward on stimulus are still hazy

The Senate is coming back to the Capitol as lawmakers continue to work on the next coronavirus stimulus package. The House, meanwhile, has opted not to return just yet, given guidance from the Capitol physician about the increased risk members and staff could face when it comes to contracting the coronavirus.

Presently, Democrats and Republican leadership have laid out pretty different approaches to the upcoming stimulus. As Vox’s Ella Nilsen reported, Democrats are eager to focus on additional aid for states and cities, and House Speaker Nancy Pelosi has said the bill would “probably [include] a number equivalent to what we have done for small businesses.” That would be significant: Thus far, lawmakers have approved upwards of $700 billion for small-business loan programs.

Republicans, meanwhile, have chafed at doing another expansive stimulus package, citing concerns about the national debt among their arguments for resisting the proposal. McConnell has more recently acknowledged that state funding will likely be necessary, though his initial push has centered on liability protections for businesses that could face lawsuits because of the potential impact on workers and customers during the pandemic.

Republicans and Democrats are expected to continue their negotiations on the legislation in the coming weeks. More than 30 million Americans have filed for unemployment insurance in the past six weeks, a sign that workers and businesses still desperately need a more comprehensive legislative response.