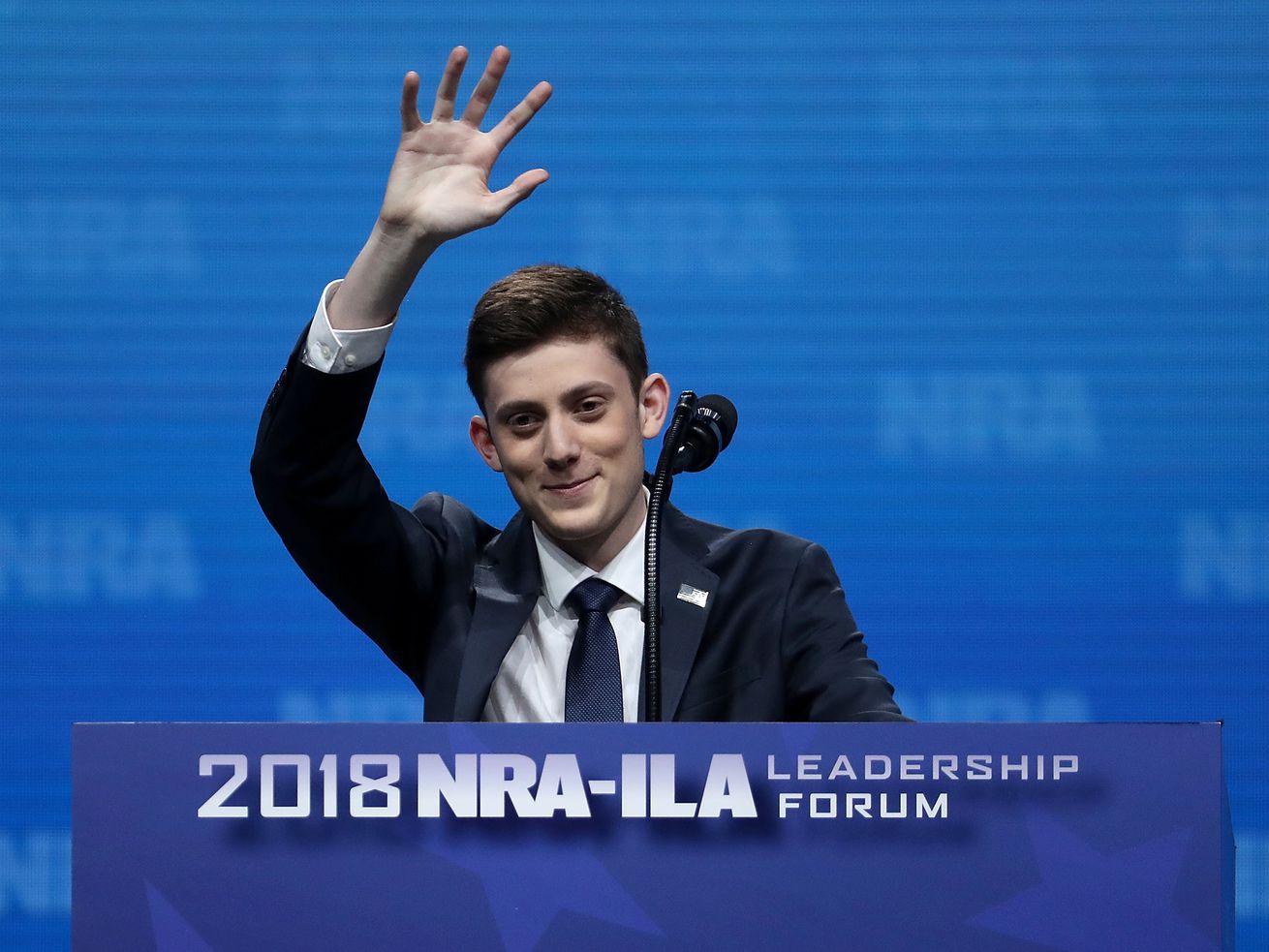 I talked to Kashuv about getting his Harvard admission rescinded over using racial slurs.

Kyle Kashuv, a survivor of the Parkland, Florida, school shooting who has since become a conservative activist who spoke at the National Rifle Association annual meeting this year and in 2018, has become the center of a new political culture firestorm.

On Monday, he tweeted that his admission to Harvard University had been rescinded after the unearthing of racist and anti-Semitic comments he made in text messages and a shared Google Doc with classmates prior to the shooting. He told me in an interview he used those slurs for “shock value.”

“I was in a friend group where we were saying the most shocking things for the sake of shock value, and you know, in the same kind of messages, I said extremely anti-Semitic things, and it’s not representative of who I am because I go to synagogue every week, and my parents are Jewish,” he said. “This isn’t … who I am.”

Three months after being admitted to Harvard Class of 2023, Harvard has decided to rescind my admission over texts and comments made nearly two years ago, months prior to the shooting.

I have some thoughts. Here’s what happened.

The comments, which swirled around Twitter before being first reported by the Huffington Post in May, included gratuitous use of the n-word, anti-Semitic references, and a reference to a fellow student as a “ni**erjock.” In a statement on Twitter, Kashuv said that he was “embarrassed” by what he said.

In the Google Doc, a venue teens frequently use as an unmonitored digital chat platform, Kashuv typed a racial slur over and over again, even bragging that “im really good at typing ni**er ok like practice uhhhhhh makes perfect.” The text messages are arguably worse — he demeans a female classmate by saying she only “goes for ni**erjocks,” suggesting that she would prefer such black men sexually to a “pasty jew” (it’s not clear from the screenshots what the context for this is).

As Beauchamp notes, the forces pressing for Kashnuv’s admission to be rescinded were bipartisan. Reason Magazine’s Robby Soave detailed how far-right figures like Laura Loomer and Mike Cernovich helped push the story of Kashuv’s use of racist slurs, as did other conservative activists who argued that Kashuv’s apology for his comments didn’t go far enough. Cernovich has tweeted repeatedly about his belief in the “white genocide” conspiracy theory, and Loomer was barred from multiple social media platforms for racist statements, making their newfound commitment to anti-racism somewhat dubious.

Rather, their interest in the case stems from their ire with right-leaning writers and pundits whom they view as opportunistic for not defending them against mainstream criticism (and, in Loomer’s case, social media bans) and being too friendly with liberals.

Kyle Kashuv referred to black athletes as “n——- jocks.” Where are the principle conservatives like @DavidAFrench and @benshapiro with a think piece about the coarsening of political rhetoric?

Come on, we all saw what you did to Milo and others.

I profiled Kashuv in April 2018 as he was gaining prominence on the right for opposing gun control measures after surviving the Parkland shooting, arguing that the Second Amendment’s primacy made gun control unworkable. At the time, conservative pundit Guy Benson called him “a reasonable voice in pursuit of bipartisan solutions” to school shootings. Kashuv was intending to take a gap year before entering Harvard to live in Washington and focus on getting school safety legislation passed through Congress, stepping down from his role as director of high school outreach for the conservative student group Turning Point USA in order to do so.

(For transparency’s sake, I’ll note that when I tweeted in November that I’d be happy to look at college admissions essays for young students taking part in the applications process, Kashuv was among those who emailed me an essay, which I edited.)

Kashuv and I spoke by phone on Monday afternoon. Our conversation has been lightly edited for length and clarity.

I want to get at something that I think is really important here. The slurs that you used were used when you were 16, which is two years ago but not that long ago. Why did you say those things? Why did you call black student athletes ni**erjocks? Why did you like typing the word ni**er? What were you trying to do? What was that?

I was in a friend group where we were saying the most shocking things for the sake of shock value, and you know, in the same kind of messages, I said extremely anti-Semitic things, and it’s not representative of who I am because I go to synagogue every week, and my parents are Jewish. This isn’t … who I am. There is no weight behind what I said, no animus. It was simply who could say the most shocking thing. That was the friend group I was with at the time. Those are the people I was with.

[Note: As others on social media have noted, the “ni**erjock” quote was not from the group Google Doc but from a text message sent by Kashuv. In a follow-up direct message, I asked Kashuv why he used that language outside of the Google Doc; he told Harvard’s admissions office that his language was part of an effort to “say the most insane things imaginable.” He responded in a message that he would not be commenting further.]

When you were saying those things, did you have a lot of black friends at the time?

Yeah, I had a few friends that we would just hang around with who would all sit by, you know, the lunch tables and just hang around and say stupid stuff and play video games with each other. And, yeah, race wasn’t really a factor. It was who could say the most insane thing.

Something that was, I think, kind of weird about a lot of this is that some of the people who were working the hardest to try to get your offer from Harvard rescinded were other folks who are further to the right [than you].

You said you have a lot to think about now. Are you still planning on taking a gap year?

Yes. The reason why I’m here in DC and the reason why I was actually granted that gap year was because I told Harvard that for the next year I’m working 100 percent of the time. I am done with school so I can focus 100 percent of the time on school safety, and I’ve been in nonstop meeting after meeting pushing for school safety because the job isn’t done. And you know, people from the media have moved on, and people have moved on and I refuse to let that happen until every single school’s safe, and until no other community has to face what mine had to go through.

Some people [on Twitter] have responded to what happened by just saying, “You said the word ni**er a bunch and you faced consequences from that.” How would you respond to that?

I know that this is all coming pretty quickly, and I understand that this must be incredibly challenging to deal with, but do you have any idea of what your next steps are going to be?

I don’t know. I’m keeping all of the options open. I’m really focused on, genuinely all I care about, all I’m really going to care about is school safety. I really don’t know. I know people have asked me about colleges. I have no clue. I’m just focused now on righting this wrong.