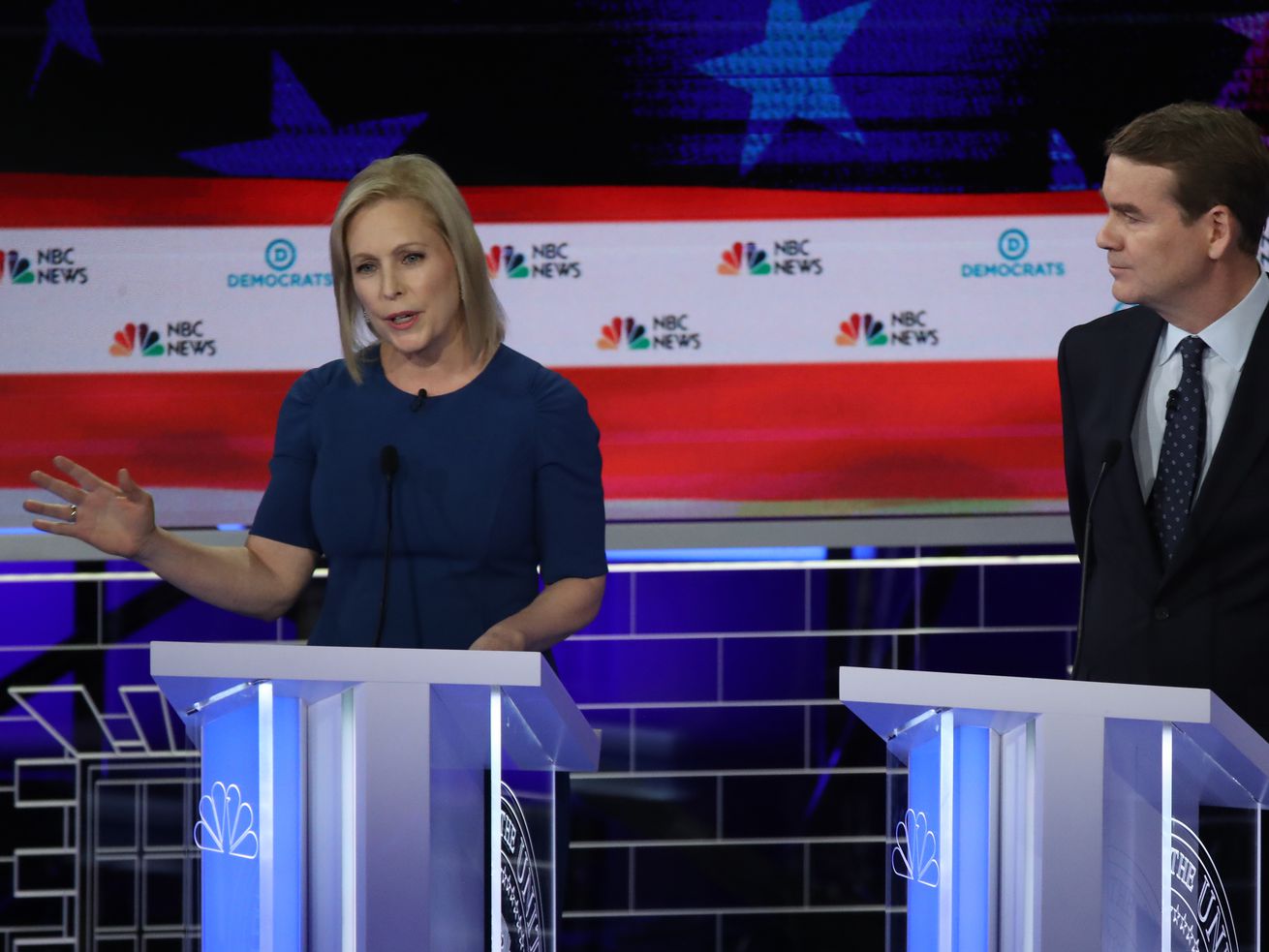 Many candidates in this week’s Democratic debates talked about the future of abortion rights in America. But Sen. Kirsten Gillibrand was one of few to talk about the history.

The exchange started with a question to Sen. Bernie Sanders about how he would preserve abortion rights if the landmark Supreme Court decision Roe v. Wade was overturned before he became president. Sanders responded that his Medicare-for-All plan would cover abortion for anyone who wanted it.

Then Gillibrand spoke up. “I want to talk directly to America’s women and to men who love them,” she said. On abortion, she said, “when the door is closed and negotiations are made, there are conversations about women’s rights, and compromises have been made on our backs. That’s how we got to the Hyde Amendment,” which bans federal funding for most abortions.

“When we beat President Trump and Mitch McConnell walks into the Oval Office to do negotiations, who do you want when that door closes to fight for women’s rights?” she asked. “I have been the fiercest advocate for Roe v. Wade, and I promise you when that door closes, I will guarantee your reproductive rights no matter what.”

Gillibrand was making a crucial point. There’s broad agreement on abortion rights across the Democratic field this year — nearly every candidate now supports repealing Hyde and codifying Roe v. Wade in statute, among other changes. But supporting those policies and making them a priority are two different things. And Gillibrand was calling her colleagues out on their commitment to fighting for abortion rights.

The Hyde Amendment, passed in 1976, bans federal funding for abortions except in cases of rape, incest, or a threat to the pregnant person’s life. Since it bans Medicaid coverage for most abortions, it can put the procedure out of reach for low-income Americans.

Gillibrand was right to call the amendment a compromise. Its architect, Republican Rep. Henry Hyde, initially proposed a total ban on federal funding for abortion. He said at the time, “I certainly would like to prevent, if I could legally, anybody having an abortion, a rich woman, a middle-class woman, or a poor woman. Unfortunately, the only vehicle available is the […] Medicaid bill.”

As Emma Green writes at the Atlantic, progressives in Congress saw Hyde at the time as a form of discrimination against low-income people, since it prevented them, but not wealthier Americans, from getting abortions. Ultimately, members of Congress agreed on a less stringent ban than the one Hyde had proposed, with the exceptions for rape, incest, and the pregnant person’s life that exist today.

Some have argued that Hyde was a way of preserving abortion access while ensuring that the government didn’t have to fund the procedure. Former Vice President Joe Biden, for example, until recently a supporter of Hyde, said at a presidential forum convened by Planned Parenthood last week that “the Hyde Amendment was designed to try to split the difference here, to make sure women still had access.”

But abortion rights advocates have argued that Hyde didn’t preserve access at all, instead acting as a de facto abortion ban for poor Americans — and research shows that it does block a significant portion of low-income women from getting abortions they would otherwise get.

Now, nearly all the Democratic candidates, including Biden, have said they want to repeal Hyde. What’s less clear is how hard they’ll fight for it, and for abortion rights in general when other priorities start cropping up.

Sanders, for example, got criticism in 2017 for backing a candidate for Omaha mayor who had backed anti-abortion legislation. “We have got to appreciate where people come from, and do our best to fight for the pro-choice agenda,” he told NPR at the time. “But I think you just can’t exclude people who disagree with us on one issue.”

At the Planned Parenthood forum, he said that with strict anti-abortion legislation passing around the country, the Democratic Party now needs candidates who are committed to abortion rights.

But with candidates taking similar positions on the issue, the question now is: How hard would each candidate work to make those positions a reality?

On the debate stage Thursday night, Gillibrand articulated that point better than anyone.