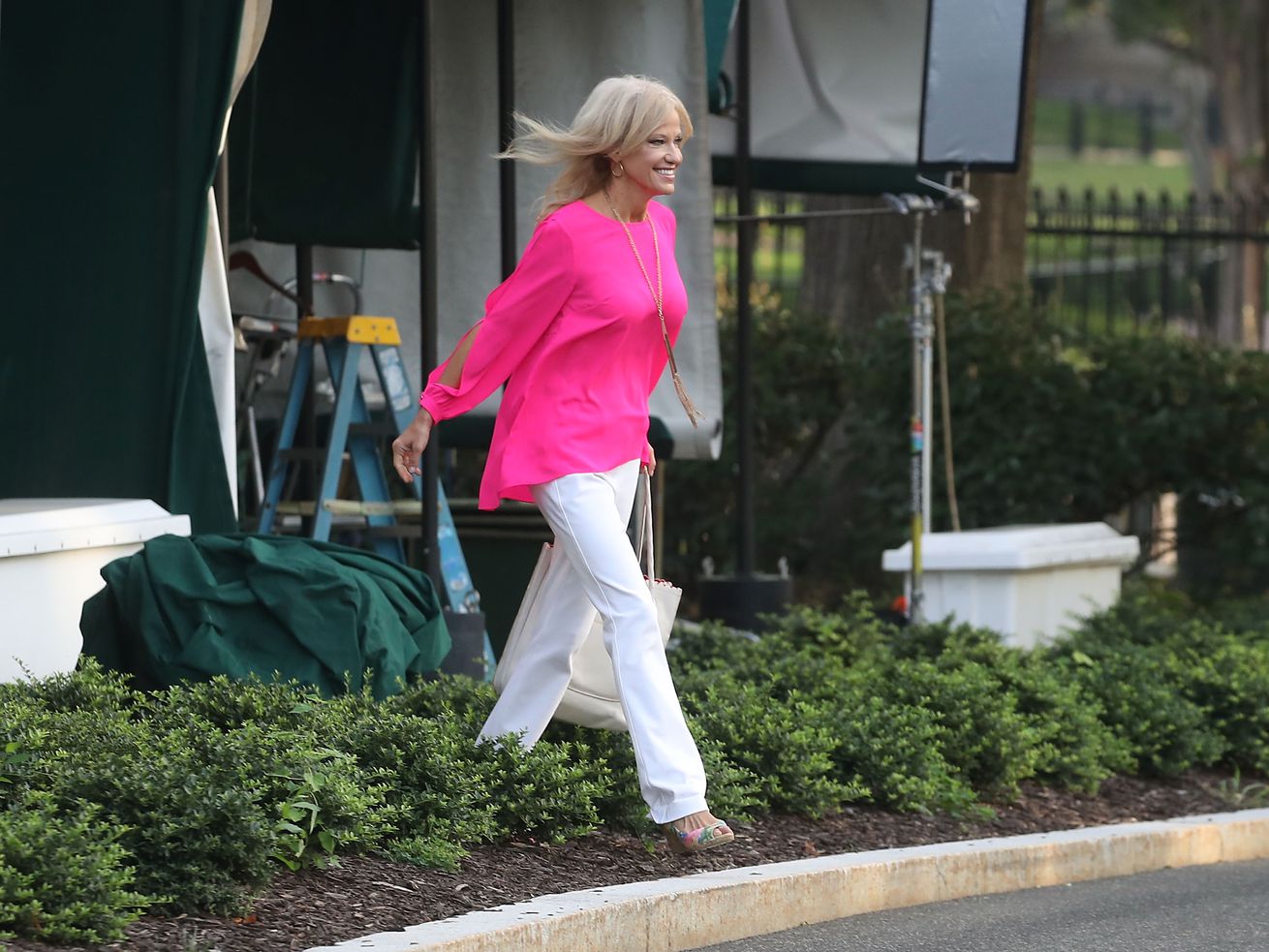 Last week, Conway said Christine Blasey Ford should be heard. This week, she said this might all be a “left-wing conspiracy.”

Josh Dawsey at the Washington Post reported on Monday that Conway told surrogates to stand up for Kavanaugh’s nomination and compared him to “elite media figures” such as ousted CBS chairman and chief executive Les Moonves and Hollywood producer Weinstein. According to Bloomberg, she also cited former Today anchor Matt Lauer.

Conway said that the allegations brought against Kavanaugh of sexual assault by Palo Alto University professor Christine Blasey Ford and of sexual misconduct by his former Yale classmate Deborah Ramirez were not proven, according to Dawsey, while the accusations against Weinstein, Moonves, and Lauer were proven and were worse. All three men lost their jobs as a result of the allegations against them.

The Republican National Committee is also pushing supporters to talk more about Minnesota Democratic Rep. Keith Ellison, who is also vice chairman of the Democratic National Committee and currently running for attorney general in Minnesota. Ellison’s former girlfriend has accused him of abuse, which he has denied.

In an email to the press on Monday, Michael Reed, research director and deputy communications director of the RNC, distributed a video clip of Ellison addressing allegations against him and wrote, “Democrats need to be asked whether they believe Ellison, or believe his accuser.”

Just a week ago, Ford came forward in the Washington Post as the woman alleging that Kavanaugh sexually assaulted her at a party in the early 1980s, when they were both in high school. She claims he drunkenly pinned her to a bed, tried to take her clothes off, and covered her mouth when she screamed, while his friend Mark Judge looked on.

The New Yorker published Ramirez’s account on Sunday. She claims that during their freshman year of college, Kavanaugh exposed himself to her and thrust his genitals in her face while they were both drunk at a party.

Ford’s therapist has contemporaneous notes from 2012 in which she discussed the alleged incident. Yale alumni were reportedly emailing about the Ramirez incident over the summer. Kavanaugh has vehemently denied both of the women’s allegations.

A week ago, in an appearance on Fox News, Conway said that she believed Ford should be heard, saying during an interview that the professor “should not be insulted and she should not be ignored.” She called for her to be heard in sworn testimony before the Senate, which is now set to take place before the Judiciary Committee on Thursday.

But over the past seven days, Conway seems to have shifted, at least publicly. In an appearance on CBS This Morning on Monday, she said the allegations against Kavanaugh are “starting to feel like a vast left-wing conspiracy” and lamented Kavanaugh’s position. “I just don’t think one man’s shoulders should bear decades of the #MeToo movement.”

She continued: “I know there’s pent-up demand for women to get their day, women who have been sexually harassed and sexually assaulted, and I personally am very aggrieved for all of them, but we cannot put decades of pent-up demand for women to feel whole on one man’s shoulders. What exactly is the standard for ruining one man’s life based on decades of allegations that have nothing to do with him?”