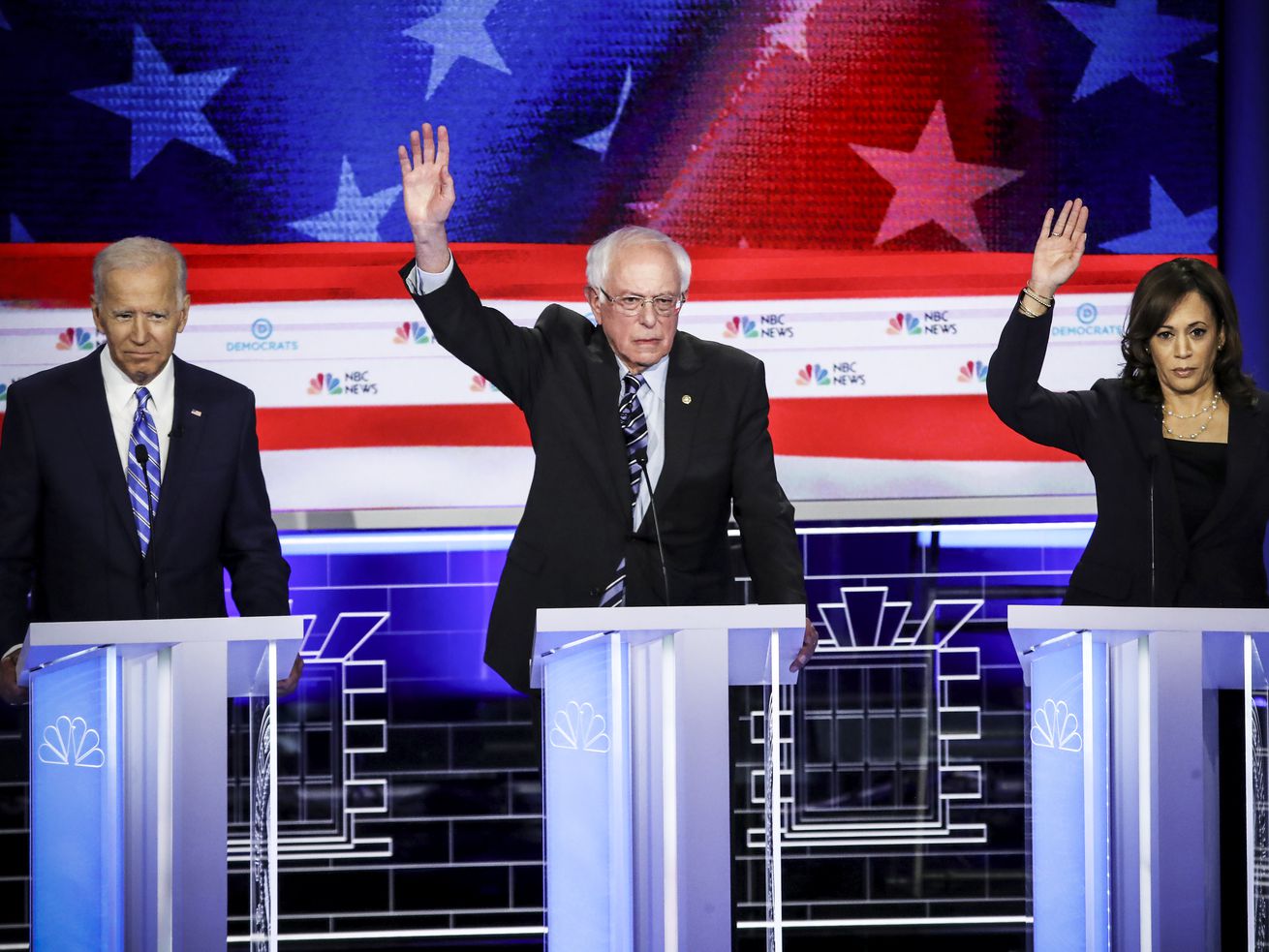 Bernie Sanders wants to abolish private insurance. Michael Bennet and, apparently, Kamala Harris are not on board.

Sens. Bernie Sanders and Kamala Harris raised their hands at the second night of the first Democratic presidential debate when asked if they would abolish private health insurance, and the fraught politics of Medicare-for-all revealed themselves again.

It was a repeat of a question moderators asked the first night, when Sen. Elizabeth Warren and New York City Mayor Bill de Blasio said they wanted to end private coverage. Sanders and Harris said yes, which didn’t seem like a surprise: They are both sponsors of Sanders’s Medicare-for-all bill that would eliminate private insurance and move every American into a single national government insurance plan after a transition period.

But after the debate, Harris said she interpreted the question to mean whether she, personally, would get rid of her own employer insurance to join a government plan. He set it up by noting many Americans — about half of them actually — get insurance through their job. But he actually asked: “Who here would abolish their private health insurance in favorite of a government-run plan?” and that could arguably be interpreted be asking the candidates as individuals.

But the does Harris actually support prohibiting private health insurance?

“No, I do not,” the California senator told MSNBC after the debate. She noted to CBS that Sanders’s bill allowed supplemental private insurance, though that coverage would be forbade from covering most major medical care. Most treatment would be covered and paid for by a single government plan.

It was also not the first time Harris had appeared to endorse a prohibition on private insurance only to try to clarify afterward. The same sequence of events played out during and after a CNN town hall in January — Harris initially seemed to support a more rigid version of Medicare-for-all, then later walked it back.

On Thursday, during a prolonged exchange on health care to open the debate, other Democrats made the case for making a government plan available to all Americans but keeping private health insurance for people who want it.

“I feel strongly that families should have the choice,” Sen. Michael Bennet, who has aggressively positioned himself as opposed to single-payer, said. “That’s what the American people want.”

Bennet, former Vice President Joe Biden, South Bend, Indiana, Mayor Pete Buttigieg, and even Sen. Kirsten Gillibrand, another cosponsor of Sanders’s Medicare-for-all bill, emphasized choice again and again. They argued people should be allowed to choose whether to keep their private insurance (about 150 million Americans currently get coverage through their job) or join a new government plan. They were clearly uncomfortable with Sanders’s prescription, which would put everybody into a government plan after four years.

This all highlights the fundamental tension in the Democratic debate over health care. Sanders and other unreserved single-payer supporters believe a national government plan is the only way to make sure every American gets coverage, health care prices come down, and the system is run efficiently.

But other Democrats believe Americans won’t like being told that they must join a government insurance plan; they prefer the more delicate approach that gives people an option to buy into a government plan but stops short of a mandate.

That can be tricky ground to walk, though, as Harris has repeatedly found.

After Sanders and Harris raised their hands, moderators turned to Sen. Kirsten Gillibrand, who has also sponsored the Medicare-for-all legislation that would eventually outlaw most kinds of private coverage — but didn’t raise her hand to say she wants to end private health insurance.

Gillibrand pointed to the provision in the Senate bill, which she wrote, setting up a four-year transition period. During that time, Americans would be allowed to buy into the new government plan. Gillibrand argued Medicare-for-all could win in competition with private insurance, rather than winning by default if the latter is abolished.

“The quickest way you get there is you create competition with the insurers. God bless the insurers, if they want to compete, they can certainly try, but they’ve never put people over their profits, and I doubt they ever will,” she said. “What will happen is people choose Medicare and we will get to Medicare-for-all.”

It was a clever way to thread the needle — embracing Medicare-for-all without touching the politically charged issue of nationalizing the health insurance industry. And it’s a theme that other candidates have been picking up on.

Medicare-for-all, as written by Sanders, would unambiguously eliminate private insurance. But other proposals, like the “Medicare for America” legislation, would preserve employer-sponsored insurance while giving every American the option to buy into a government plan. People on Medicaid or enrolled in Obamacare plans would be moved into the new government plan. It’s a halfway point to single payer.

Its supporters have their own slogan. As Buttigieg billed it at the debate: “I would call it Medicare for all who want it.”

“You take something like Medicare, a flavor of that, you make it available on the exchanges, people can buy in. And then if people like us are right, that that will be not only a more inclusive plan, but a more efficient plan than any of the corporate answers out there, then it will be a very natural glide path to the single-payer environment,” Buttigieg said. “Even in countries that have outright socialized medicine, like England, there’s still a private sector. That’s fine.”

Biden went the same route: He wants everybody, including people with employer plans, to be able to buy into a government health plan.

“Make sure that everyone does have an option,” he said. “Everyone with private insurance and employer insurance and no insurance. They can buy in to a Medicare-like plan. We can do it quickly.”

Bennet was on the Medicare “for all who want it” train, too, though the bill he proposed in the Senate would be limited to the 10 million or so people who buy health insurance on the Obamacare marketplaces.

“Easily the number of people on a public option can be 35 million. For them it would be Medicare for all as Mayor Buttigieg said,” Bennet said. “For others that want to keep it, they should be able to keep it.”

Sanders was undaunted, which shouldn’t be a surprise considering he wrote the single-payer bill in the Senate. His response to Bennet was simple: Medicare is really popular and so expanding it to every American should be popular.

“You know, Mike, Medicare is the most popular health insurance program in the country. People don’t like their private insurance companies. They like their doctors and hospitals,” Sanders said to Bennet. “Under our plan, people can go to any doctor or any hospital they want. We will substantially lower the cost of health care because we stop the greed of the insurance companies.”

Harris, too, indirectly made the case for single payer by drawing from stories like those uncovered by former Vox reporter Sarah Kliff:

We have to think about how this affects real people. And the reality of how this affects real people is captured in a story that many of us heard and I will paraphrase. There is on any night in America, a parent who has seen their child has a temperature that is out of control and calls 911, what should I do? Take the child to the emergency room. They get in their car and they drive and they are sitting in the parking lot outside of the emergency room looking at the sliding glass doors with their hand on the forehead of their child knowing if they walk through the sliding glass doors even though they have insurance, they will be out a $5,000 deductible when they walk through the doors. That’s what insurance companies are doing! Only in America today.

The politics of single-payer health care are hopelessly convoluted. Nobody knows how it shakes out in such a big field with so many other issues competing for attention: a recent poll of Iowa caucus-goers found about half said supporting Medicare-for-all is a must-have for their preferred 2020 candidate.

Americans do support a broad government role in getting people covered. Out-of-pocket costs for employer coverage have increased substantially over the last two decades; those plans aren’t necessarily a good deal like they used to be. Medicare-for-all supporters have a good slogan and a worthy cause — health care is a human right — with proven staying power.

Single-payer isn’t nearly as unthinkable as it was 10 years ago, when Democrats couldn’t even get a public option in the Affordable Care Act. Sanders, Harris and the other Medicare-for-all supporters are trying to build on that momentum.

But opinions are still fluid. Polling shows that support for single payer does drop when people are told private insurance will be eliminated. There seems to be some confusion among voters, too, about whether Medicare-for-all would abolish private coverage. Private plans are still pretty popular with the people enrolled in them. Historically, proposing major disruption in the health care sector has been a political loser.

Many Democratic voters say they would prioritize fixing the system over overhauling it entirely. Those people are the audience for the health care pitch from Biden, Bennet, Buttigieg, and others: expand health coverage but don’t go overboard.