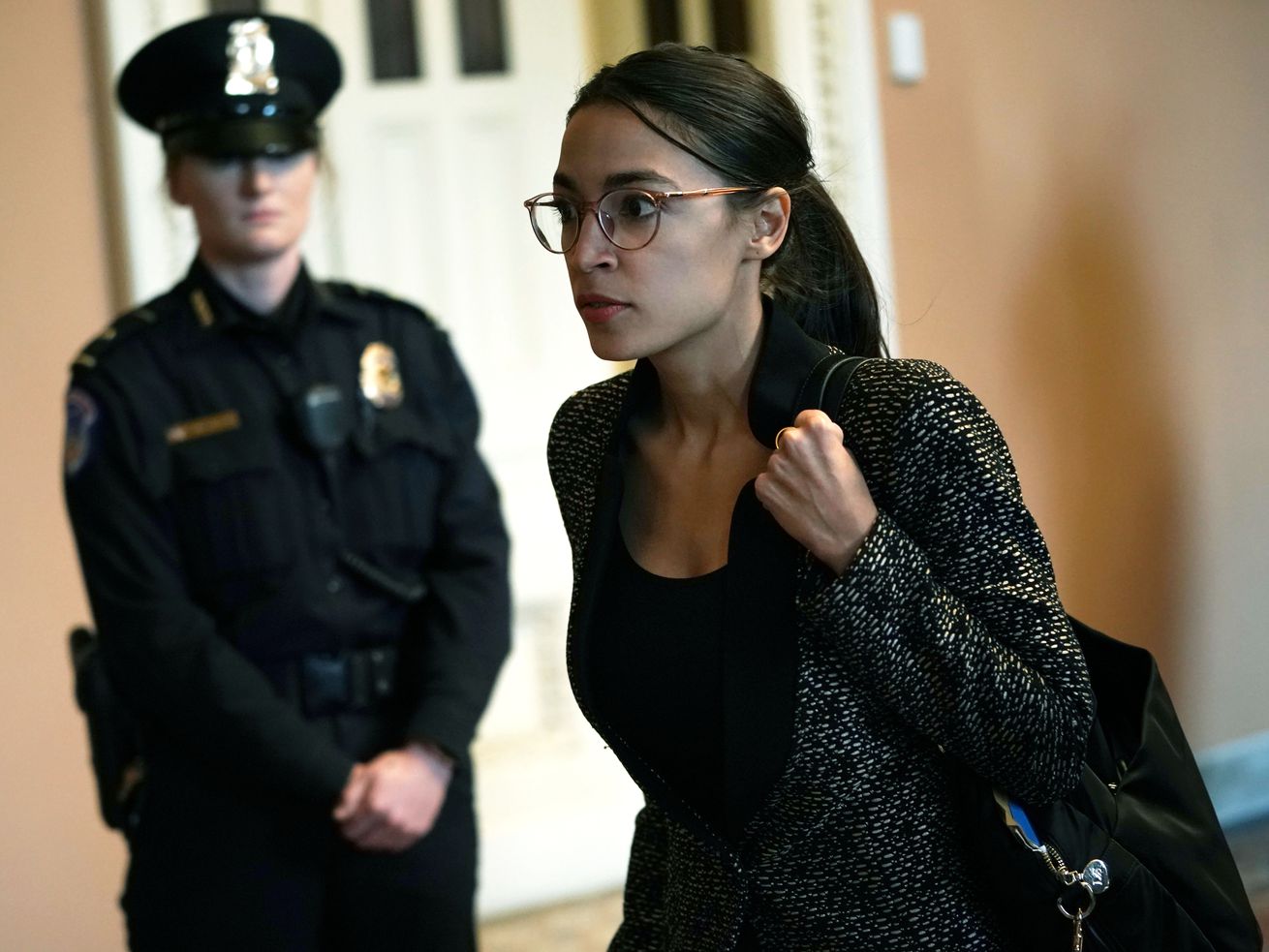 Texas Rep. Henry Cuellar is a pillar of the local Democratic Party — he’s backed Nancy Pelosi in leadership contests, his siblings both hold county-wide office in his hometown, and he’s won seven terms in the House, easily triumphing over token Republican opposition.

He’s also the No. 1 target of the Justice Democrats, a left-wing group whose mission is to drag the Democratic Party left by making life miserable for incumbents like Cuellar in safe blue districts — threatening them with progressive primary challengers.

The small-donor-funded group supported a once-unknown primary challenger, Alexandria Ocasio-Cortez, who became a Democratic Party superstar after she crushed longtime Rep. Joe Crowley in New York. They’ve already named Cuellar as a 2020 target and are vetting possible recruits for a race against him, but they’re hoping over time to build a larger slate of AOC-like challengers. The group is seeking not just progressive candidates but ideally those who are young, diverse, and actually from working-class backgrounds, rather than typical politicians, to remake the Democratic Party in Congress.

As the group’s communications director Waleed Shahid put it, their mission is “replicating the success of New York 14.”

If they can pull it off, there’s real reason for establishment Democrats to worry. The Tea Party deployed the same strategy during the Obama years and profoundly changed the Republican Party. The agitators didn’t need to take on every Republican in Congress, they just needed to pick off a few to send the entire conference running scared.

The next test case

Cuellar is the kind of Democrat that Justice Democrats can’t stand.

He’s a lot tighter with Republicans who run Texas than you would expect for a Democrat. He received an appointment from then-Gov. Rick Perry in 2001 to serve as secretary of state for nearly a year before he was elected to Congress.

Last fall, while conservative icon George Will was urging readers to vote Democratic up and down the ballot to send a message about Trump, Henry Cuellar held a fundraiser for a vulnerable GOP House member from a neighboring district. (He wound up narrowly prevailing over viral video sensation M.J. Hegar.)

Cuellar’s voting record in Washington is more conservative than 80-90 percent of House Democrats and he voted with Trump 70 percent of the time in the last Congress.

Justice Democrats don’t yet have a named champion to challenge him, but they are actively looking at contenders while their executive director Alexandra Rojas drags him on social media and in op-eds.

Cuellar himself, meanwhile, is projecting confidence and told reporters on Capitol Hill this month that “I’ve been polling and my district is more moderate, conservative Democrats, and I think an outside group that thinks that they know South Texas politics better than I do are going to find [that] out.”

But he’s also trying to learn from Crowley’s mistakes — taking the potential challenge seriously and actively laying the groundwork for a real campaign, an unusual step for a seven-term incumbent so far from the election.

Since the goal is not just to win a few races but to send a powerful message by winning the races, it matters to Justice Democrats what message an election sends, and in this regard beating Cuellar could be even more powerful than beating Crowley.

Centrist forces in the Democratic Party immediately responded to Ocasio-Cortez’s victory by telling incumbent members that Crowley’s downfall was more about demographics than ideology.

Crowley represented a diverse district in the Bronx and Queens. He is a white moderate who was high up in the House Democratic leadership hierarchy and was widely seen as Pelosi’s all-but-inevitable successor as the party’s leader in the House. But then Crowley was challenged by Ocasio-Cortez, a bartender and former social worker who’d volunteered for Sen. Bernie Sanders’s (I-VT) campaign in 2016 and was backed by the then-nascent Justice Democrats.

Progressives pointed to the race as proof that voters in blue districts want further-left representatives. But the establishment argued (and likely hoped) that it was more an anomaly specific to the circumstances of that House seat — a Latina beat a white man in a majority-minority district.

That in turn spawned an effort from the left to spin Ayanna Pressley’s successful primary challenge in Massachusetts to Michael Capuano as a second progressive win, even though in that case there actually wasn’t a strong ideological difference between Pressley and Capuano (who are both very progressive) and the results probably did turn largely on demographics.

Cuellar is from a heavily Latino district, and he’s Latino himself. If the progressive insurgent beats Cuellar, regardless of his or her race, Justice Democrats believe that it’ll prove their point.

In some ways, the reality might not even matter. Their theory of political change works not because it’s likely that left-wing challengers will unseat dozens of incumbent House Democrats but because a handful of successful challenges will scare a wide enough swath of similarly situated incumbents into moving left.

This is a fundamentally different strategy than Democrats have typically pursued, even recently.

Consider two other progressive groups that’ve emerged since Sanders’s 2016 run. Brand New Congress is grounded somewhat in avoiding partisanship, though Justice Democrats has partnered with them in the past. Their mission statement says “we need legislation not dictated by party, but solutions that work to move our country forward together” and they describe their message as “post-partisan” even though their stated policy agenda of Medicare-for-all, criminal justice reform, women’s rights, voting rights, LGBTQIA rights, etc. pretty clearly only has a home in one party.

Justice Democrats, by contrast, while obviously critical of the existing party establishment is — by definition — an organization that is committed to the Democratic Party and working with and through it as a vehicle for change.

Shahid describes it as a “social democratic or democratic socialist party-within-a-party,” arguing that the vicissitudes of the US party system force people like him to share a party with people like Senate Minority Leader Chuck Schumer and House Democratic Whip Steny Hoyer who, in a European-style proportional system, would simply inhabit different political blocs. The point, however, is not to displace the Democrats but to change them.

The other, Our Revolution, serves as Sanders’s main national political organization. Deep in its DNA is that the left-wing message can win in districts all around the country. They contested many primaries in open or Republican-held seats, won some of them, and then pretty uniformly lost in the general election. Which isn’t to say that the group had no successes in the cycle — they had several important ones — but they came overwhelmingly in blue districts.

Justice Democrats are offering the less idealistic but more plausible theory for left politics to win primaries: play in districts where the Democratic nominee is all-but-certain to prevail in the general election.

The strategy is analogous to the method of the Tea Party. The group did not replace the entire House Republican caucus with a new cohort of further-right members. They went into safe red districts and knocked off one or two Republicans in primaries and got the whole conference in line.

“Seventy-three percent of congressional districts are noncompetitive,” says Shahid, “so there’s a huge amount of leverage that progressives have in these primary races that are often uncontested.”

An open question is to what extent Ocasio-Cortez will use her considerable media platform to help the Justice Democrats. Members of the group say they’re not sure whether they’ll be able to get her to weigh in on specific races, but she is deeply connected to the group.

Ocasio-Cortez’s continued dalliance with the Justice Democrats and their mission annoys her fellow Democrats much more than alleged concerns about her tweets or her committee assignments. It’s by no means unheard-of for a member of Congress to get to the House by beating an incumbent Democrat in a primary — current establishment darling Beto O’Rourke did it, as did Cuellar himself — but once you make it to Washington you’re supposed to become a team player.

Ocasio-Cortez hasn’t formally endorsed a primary challenger to Cuellar or anyone else (her staff purports to be uncertain whether she’ll eventually weigh in and says they are focused on other things). But on January 16, the Justice Democrats released an eight-minute video starring Ocasio-Cortez and the group’s executive director Alexandra Rojas. It calls on viewers to submit nominations of people who could be the next AOC.

Party leaders don’t like primaries in general, and there is nothing incumbent members of Congress like less than primary challenges to other incumbents. Other progressives and Ocasio-Cortez allies aren’t getting involved.

Rep. Pramila Jayapal (D-WA), for example, bucked the party establishment to endorse Sanders in the 2016 primary and then won his endorsement and her House seat. She aligned herself with the Justice Democrats last April but earlier this month distanced herself from the concept of challenging incumbents in primaries. She told Politico: “I am expending zero energy in trying to recruit other candidates to run against Democrats.”

That’s typical. Sanders himself, for example, did not endorse Ocasio-Cortez or any other primary challengers to incumbent Democrats. It’s simply not something incumbent members of Congress do.

But Ocasio-Cortez has made clear from the get-go she’s not on Capitol Hill to make friends. The prospect that the party’s highest-profile new figure might lend her voice to a controversial but potentially transformative new group should make the establishment nervous.

Justice Democrats has the potential to change the game because there’s never before been a progressive organization single-mindedly focused on deliberately courting ideologically-driven primaries.